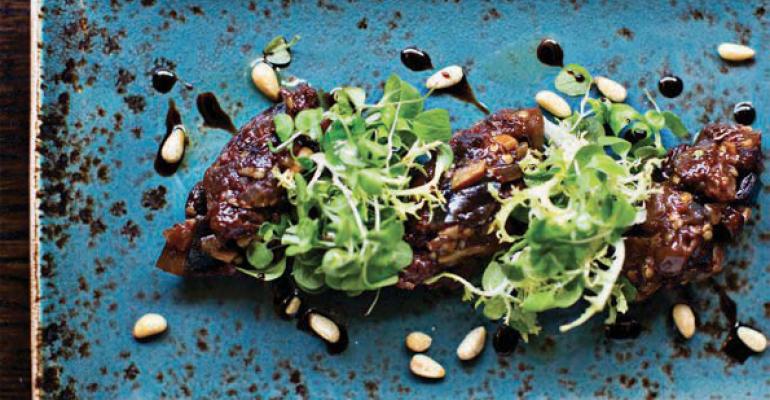 From veggies to desserts, innovation is on the menu for 2014. GALLERY: A closer look at the five trends you can&#39;t ignore &bull; See more Food Trends

It’s that time of year. Every chef, restaurateur, publicist and publication is announcing their can’t-miss trend picks for the New Year. Predicting the future is almost impossible, but that’s not stopping us from making our own guesses—wait, carefully researched, reported and analyzed theories, we mean.

We started by asking the one chef we thought might actually have an idea. We called Didier Elena, the chef who’s spent 25 years with Alain Ducasse and Paul Bocuse, who’s earned eight Michelin stars, worked in some of the world’s top restaurants and is now heading Aspen’s Chefs Club that features some of this country’s best new chefs.

He told us if he knew the answer, he’d open that restaurant tomorrow. He’s not doing that, as far as we know. Undaunted, we queried some of the top chefs and publicists from across the country, gathered and studied everyone else’s list of predictions and tried to think back to our travels and tastings from the past year.

What we found, from burger joints to white-tablecloth dining rooms, was chefs looking to innovate and personalize their offerings. Our list may not be full of wild and cutting-edge ideas; rather, we hope these five broad areas provide opportunities for every type of restaurant to enhance their menus and appeal to more customers in 2014.

Yes, vegetables were on everyone’s list last year, so this isn’t groundbreaking and probably beyond trendy, but we couldn’t ignore this confluence of several smaller trends. This hit us while on the Pork Crawl in Nantucket, MA, an outing hosted by the Pork Board to show off amazing pork dishes (mission accomplished, by the way), when one of the featured chefs was overheard saying “vegetables are the new pork.” Calm down, pork is still pork, and bacon will always be bacon, but the point the chef was making, we think: Vegetables are becoming the latest and most affordable canvas for creativity.

They continue to move to the center of the plate as consumers’ taste for healthy and locally sourced products increases, while the price of most proteins continues to rise. It’s why veggies—the roots, stems and petals—can be found on every page of the menu, from cocktails to entrees to desserts.

Tony Maws, the James Beard Award-winning chef of Craigie on Main in Boston, has featured White Asparagus Ice Cream with candied hyssop, anise hyssop sprinkles and a Dark Chocolate Marquis with beet and white chocolate swirl ice cream, pumpernickel crumb and beat coulis. (More on dessert, as a trend of its own, later.)

Total menu incidence of vegetables has increased 11 percent over the past three years, according to data from Technomic, and we see that number growing even more.

A prime example is the flexitarian approach from Nicole Pederson, dubbed the “vegetable magician” by Chicago Reader, at Found Kitchen and Social House in Evanston, IL. Her hearty vegetable plates (roasted Brussels sprouts and squash with harissa, cilantro and pepita, for example) can be shared or enjoyed as an entrée.

Brandt Evans, owner of Pura Vida in Cleveland and chef/partner at Blue Canyon Tavern in Twinsburg, OH, says chefs can take classic American comfort foods and turn them into vegetarian options like shepherd’s pie made with tofu or seitan and stuffed peppers made with couscous and mushrooms.

Meatless Mondays, a global movement that just celebrated its 10th anniversary in October, is more popular than ever. At Second Home Kitchen + Bar in Denver, chef Jason Brumm showcases a different vegetable every Monday.

Andrew Freeman & Co., a leading hospitality consultant and trend spotter (see sidebar, Page 30), agreed that veggies are no longer just a sidekick, noting Michelin-starred restaurants like Atelier Crenn in San Francisco and Eleven Madison Park in New York are transforming carrots to take on a meaty texture and flavor in preparations like jerky and tartare.

Small plates have been all the rage the past several years, but their big brother isn’t happy. Large plates are fighting back for space on the table and winning at many restaurants across the country.

The intent really is the same as with small plates. It’s all about sharing, and “making guests feel happy and at home,” says Mark Allen, executive chef and culinary director at Towne Stove and Spirits in Boston. He offers a Whole Wood-Fire Grilled Red Snapper for two with garlic, broccolini, lemon confit and olive oil for $64, and says on a good night he can sell as many as 10. “Once you sell one, then you really start selling them,” he says of the wow factor that comes when the impressive plate is delivered from the kitchen.

Fatty ‘Cue, with locations in Manhattan and Brooklyn, offers large-format dishes with an East/West theme. They feature one protein (pig, brisket or chicken) with sauces and garnishes from both sides of the world.

Chef Roger Waysok of South Water Kitchen in Chicago offers a Maple Leaf Farms Whole Smoked Duck For Two with baby bok choy and sweet potato puree. It’s been so popular he keeps including it on his menus, but tweaks the flavors with different seasonal ingredients.

“The world of food is all about having fun now, and this brings the table together and is more interactive,” Towne’s Allen says, adding that it’s not just couples ordering dinners for two, but often large groups ordering multiple entrees to be shared.

Seasonality, locally sourcing products and sustainability have all gone beyond trends to become a way of life, but canning, drying and preserving are the latest extensions.

James Beard Award-nominated chef Paul Virant is a great example. His book, The Preservation Kitchen: The Craft of Making and Cooking with Pickles, Preserves and Aigre-doux, presents preserving techniques, recipes and menu pairing ideas, while his Chicago restaurants, Perennial Virant and Vie, showcase many of the finished products he writes about.

Greg Baker, the James Beard Award-nominated chef from the Refinery in Tampa, says canning and preserves enable chefs to use the same high quality and locally sourced products in the offseason that they use during the growing season. Chef Michael Sindoni of the new CBD Provisions in Dallas spent the past summer before opening his restaurant canning peaches, cucumbers and peppers for use this winter.

Not only are the jars and cans being used in the kitchen, Urban Farmer Steakhouse in Portland has a pickling pantry in the dining room with several tables where guests can sit. The visually stunning room isn’t just for show, as chef Matt Christianson and his staff occasionally wander out to grab a jar for use in the kitchen.

Desserts call it a comeback

Steve Chiappetti, chef of J. Rocco Italian Table & Bar in Chicago, has seen firsthand what recent Technomic data proves: Dessert consumption is on the rise. He says customers are ordering desserts approximately 25 percent of the time, way ahead of the 10 percent he was seeing the past few years as the economy teetered between recession and recovery. At times, he even wondered if it was worth employing a pastry chef.

“When I talk to customers there’s the sense of ‘I’m going to treat myself,’” he says, which mirrors Technomic’s report indicating 40 percent of consumers are having desserts after meals at least twice a week, up from 36 percent in 2010.

It gets better: “Consumers aren’t holding off on dessert until after dinner; instead, they’re reaching for easily accessible, handheld and portable treats at just about any time of day,” says Darren Tristano, e.v.p. of Technomic. “Operators need to look at flavors, portion sizes and evolving needs to satisfy a broad range of consumers’ dessert expectations and preferences.”

Perhaps that explains the recent wave of gourmet cupcakes and donuts, or even this year’s craze, the Cronut. What’s next? Andrew Freeman says it will be the ice cream sandwich, like the milk chocolate and malt version at Hard Water in San Francisco.

Éclairs could be the answer—they’re hot in France now—or Cronut creator/pastry chef extraordinaire Dominique Ansel has moved on to the Magic Soufflé, a brioche filled with chocolate soufflé. Or maybe it will be candy bars, like the one at The Proprietors Bar & Table in Nantucket that features a chocolate candy bar tart with nougat ice cream.

According to data from Food Genius, a tech firm tracking menu data, desserts are the smallest section of an independent restaurant’s menu. On average, desserts total six items, half the amount of appetizers on the same menu. “We’ve seen restaurants focus on building out their appetizers, increasing shareables and small plate items, and a growth in sides that are more complex and involved,” says Food Genius cofounder and v.p. Benjamin Stanley. “Dessert is the next logical area to innovate.”

Instead of canning fresh peppers this summer, Matt Jennings, the chef and owner of Farmstead, Inc., in Providence, RI, made his own paprika. He’s now using it for his house-made chorizo, pastas, brines, rubs and other barbecue-based dishes.

He’s not alone. More and more chefs are creating their own spices, sauces and tableside condiments. It’s yet another way to maximize product, create unique flavors and provide artisanal-quality fare. Braden Wages, chef at Malai Kitchen in Dallas, makes his own Sriracha sauce (one of the hottest, literally and figuratively, flavors trending now) and has noticed other restaurants offering a spin on “A-1” sauce and other condiments.

The sauces and spices give chefs another way to add depth to their dishes. Tony Messina, sashimi chef at Boston’s Uni, goes beyond the standard table salt. His Green Tea Salt combines green tea with sea salt and blending it keeps the granules consistent, while his Hibiscus Salt adds a light floral seasoning, perfect for scallops.

Andrew Zimmerman, of Michelin-starred Sepia in Chicago, makes Spruce Salt by combining spruce tips (the young shoots of pine trees) and kosher salt for use in a dish featuring matsutake mushrooms. The mushrooms are poached and then served in a dashi broth, and topped with the salt—a flavorful and fragrant finishing that provides a bitter and piney flavor to the dish, complementing the earthy flavors of the mushrooms.

“Operators are taking off-the-shelf sauces like ketchup, mayo, ranch dressing and mustard, and adding their own twists in flavor,” says Food Genius’ Stanley of the emerging trend. “Much of this comes from growth in burgers and fries. A little tweaking can go a long way to create differentiation among others who are often serving many of the same items.”

Chef Ernesto Uchimura of Plan Check Kitchen & Bar, a one-year-old modern American eatery in Los Angeles, has taken the most popular condiment and turned it upside down. He dehydrates homemade ketchup, transforming it into what he calls a leather (think fancy fruit rollup) and then puts it on his burgers. By removing the water, the leather reconstitutes with the juices from the burger and creates a beefy-tasting ketchup.