/sites/all/themes/penton_subtheme_restaurant_hospitality/images/logos/footer.png
Recent
Recent
New on the Menu: Corn ribs and mapo mac & cheese
Jun 11, 2021
A look at seven new restaurants serving breakfast all day
Jun 09, 2021
Flavor of the Week: Farro, the trendy ancient grain
Jun 07, 2021
5 Things: Boston coffeehouse forms union; food industry adds most jobs in May
Jun 07, 2021
Courts are challenging the Biden Administration’s prioritization of women and minorities for restaurant relief grants
Jun 07, 2021
Featured
8 new restaurants we’re dying to try: Summer ’21 anticipation edition
May 25, 2021
This delivery co-op will let restaurants own a piece of the profit
May 24, 2021
Tiffany Derry and Tom Foley plan a fried-chicken concept for underserved communities
May 20, 2021
After a pandemic pause, Ani Ramen House is shifting to rapid growth mode
May 20, 2021
New on the Menu
brought to you by
Food & Drink

New on the Menu: Corn ribs and mapo mac & cheese 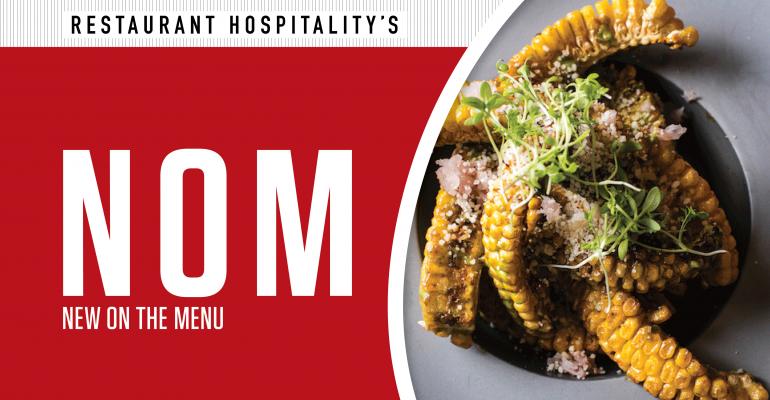 Start Slideshow ›
Plus a corn chowder with bone marrow, shrimp with ouzo and a Puebla-style tlayuda

Overthrow Hospitality has, for years, been quietly running bars all over New York City with meatless menus. The customers don’t seem to miss the animal protein, and their chefs have become very creative with vegetables, like the corn “ribs,” that are being served at the company’s newest cocktail bar, Etérea.

Also in New York, the team that brought Morgan’s Texas-style barbecue to Brooklyn has opened Tiny’s Cantina a few blocks away. Originally conceived of during the pandemic as a takeout-friendly tlayuderia — a tlayuda is a type of Oaxacan pizza, sort of — it opened as the city was opening up and became more of a taqueria with a full bar. But there’s still a tlayuda on the menu, reinterpreted by Poblano chef Cenobio Canalizo.

Related: New on the Menu: Cereal shots and chickpea loaf

Nice Day is another restaurant that opened in New York during the pandemic — a takeout spinoff of fast-casual Chinese concept Junzi Kitchen. They’ve revamped their menu, including a dish that mashes up two comfort foods: Mac & cheese and mapo tofu.

Meanwhile, in Nashville, Kristin Beringson is the new executive chef of Henley, where she’s serving curried corn chowder with a chunk of bone marrow. And in Chicago, the fourth location of Avli has opened and features a traditional dish of shrimp with ouzo, with the not-so-traditional addition of smoked feta cheese.