New on the Menu: Cereal shots and chickpea loaf 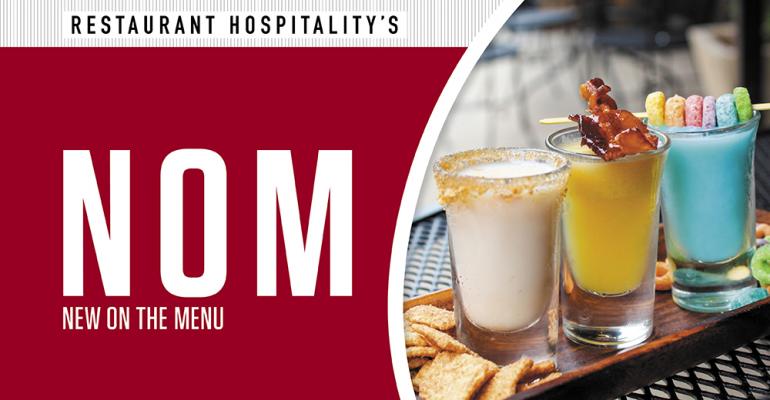 Karl’s is a popular restaurant in Detroit that recently reopened, and chef Kate Williams is doing her own version of meatloaf with ketchup, except it’s meatless.

That’s not the case for the wings at Bandits in New York City, which are indeed made with chicken, but the sauce is vegan so it can be cross-utilized in dishes for people who’d rather skip the dairy.

Also not vegan are the cereal shots at PB&J in Chicago, for which two have the cream liqueur Rumchata, and the third has candied bacon.

You could leave the egg off of the fava bean & asparagus salad at the Rosewood Miramar Beach hotel in Montecito, Calif., and no-doubt plenty of customers do, but executive chef Massimo Falsini says that egg is an essential part of the otherwise-vegan dish’s balance.

And finally the dish in this week’s NOM from Bulrush in St. Louis, where Rob Connoley is plumbing the depths  of old Ozarks cuisine, is centered around pork. The greens in the dish would normally be slowly cooked with bacon fat, but Connoley takes that a step further: They’re flash-fried.

An error in the price of Bandits' wings has been corrected.
Start Slideshow ›
0 comments
Hide comments
Recommended Reading