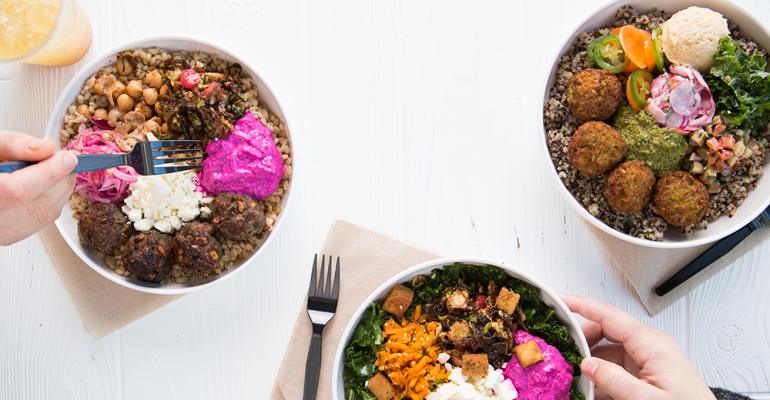 Noon Mediterranean CEO on strategic alternatives: ‘Nothing is not on the table’

After filing bankruptcy earlier this month and closing seven restaurants, the Noon Mediterranean concept is reworking its menu and focusing on its staff.

Boyd said the two co-founders still hold a small stake in the fast-casual Mediterranean chain they first opened as VertsKebap in Austin, Texas, in 2011. The decision to part ways with Heyne and Stein was “mutual,” Boyd said.

Heyne, however, said he and Stein had offered to “save the company money and step into a passive position” as advisors. “But it was decided we were not needed,” he said.

Since late 2017, the chain’s largest shareholders include a group of investors from Germany who injected $8.5 million and rebranded the concept as Noon Mediterranean, shifting the corporate headquarters to New York and broadening the menu.

“They wanted to evolve it,” said Boyd, who worked previously in the finance world with J.P. Morgan but has been with the restaurant chain in various leadership roles since early 2017.

Part of that evolution was moving away from the “meat cones,” or rotisserie meats, that once defined the original döner kebab concept and shifting the menu toward a more-accessible build-your-meal Mediterranean menu.

Prior to the bankruptcy, Noon Mediterranean had 19 units stretching from Texas to New York. But Boyd said the chain had challenges with the rebrand, primarily with leases, but the concept also lost touch with its base.

“We did make the menu a little too broad,” he said. “We went the path of focusing on providing variety both in terms of number of items on the menu, as well as how often we changed it, because there was a seasonal menu.”

Heyne, on the other hand, blamed the chain’s overly rapid expansion four years ago into the Dallas and Houston markets. By the time it was decided to rebrand, some leases were not performing well, and the company was faced with the challenge of rebranding and changing its name while correcting real estate decisions.

“All of those steps would break the neck of any company,” said Heyne, adding that the investors didn’t give the rebrand enough time.

Filing bankruptcy and closing seven restaurants was “a difficult decision,” Boyd said, “but a necessary one for us to clean up the situation we had gotten ourselves into.”

Now, as the chain works on its reorganization plan, the company has also hired an investment banking firm to explore various strategic alternatives, including a possible sale.

“There’s nothing that’s not on the table,” said Boyd. “We are actively looking for investment. We’re currently looking for $5 million to $10 million, but also any and all investment structures that might carry us out of Chapter 11.”

This is not an end, said Boyd. “This is an opportunity to make some of those big changes that will move us back to the successful place we were in the past and save some of the good bones this business has.”

The company is working on narrowing the menu and listening to guests to focus on what they love about the brand, including possibly a return to the craveable dishes guests loved in the past.

The chain will test a return of the rotisserie meat cones, for example, but Boyd said fans shouldn’t necessarily get their hopes up.

“I would love to bring them back. Our guests loved them, and we loved them. But there were some serious operational challenges with them,” he said. “But we will trial them.”

Boyd said he is spending some time visiting restaurants “trying to refocus our teams around a new mission to create happiness for both our guests and our employees.”

That effort will include training for all team members, but in particular for leaders to give them a greater “owner/operator mentality,” and offer them support and freedom to make more decisions at the store level, said Boyd.

The 12 restaurants that remain open are profitable, he said, and there are no current plans to reject any more leases. Most of the existing restaurants are in Texas with one unit in Boston and one in Philadelphia. The restaurants are roughly 1,600- to 2,200-square-foot street-front locations.

Boyd said he did not immediately have an average unit volume or average check information, noting that it varies significantly between the East Coast and Texas units.

Boyd pointed to the proposed acquisition of the Mediterranean Zoe’s Kitchen Inc. by Cava Group Inc., announced last week, as an indicator that there is a lot of investor interest in the fast-casual Mediterranean space, which has become increasingly crowded.

Boyd, however, said Noon’s struggles were not a result of increasing competition.

“There has been a lot of growth, but I still see a lot of white space opportunity, so I don’t think we’re at a point where competition is a factor,” he said.