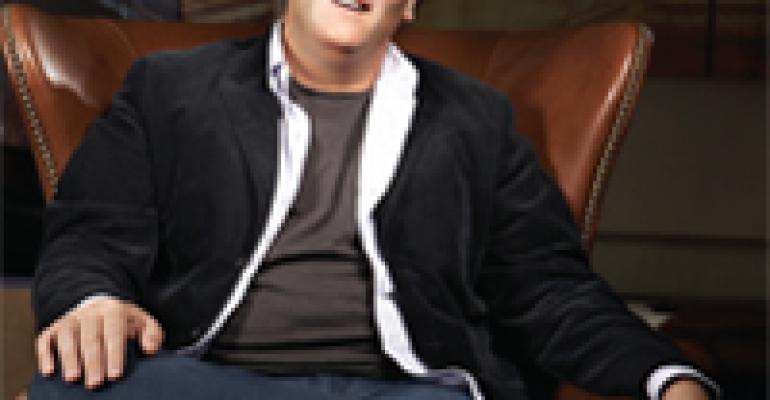 José Andrés, a 2007 inductee into Who's Who of Food & Beverage, never stops coming up with new ideas. Andrés, born in Asturias, Spain, and raised in Barcelona, is a major star on Spanish TV. Now he has a PBS show, Made in Spain, along with a just-published companion book. Always balancing avant-garde instincts with the traditional, his philosophical bent with the pragmatic, he pulls it all off with his endearing and passionate personality. The creator of four Washington, DC, restaurants — Café Atlantico, Jaleo, Zaytinya and Oyamel — he chatted with RH contributor Libby Platus about his unconventional concept in a new Los Angeles luxury hotel.

RH: You have developed an unusual concept, the Bazaar, at the new Beverly Hills SLS Hotel. What's the thinking behind it?

Andrés: The Bazaar is a place where people can experience many different things. It's not a group of restaurants; the space doesn't have walls. We have enough walls in our lives. We have a tapas place with traditional and modern dishes from Spain. There's a great bar applying new culinary techniques. And another area where we're doing a lot of fun things with fruits and vegetables. In the middle of the bazaar is a patisserie. We have carts moving around, uniting the spaces: a cart of cotton candy served with foie gras, eel or avocado; another cart has tiny cones with caviar.

RH: How did you end up working with Sam Nazarian from SBE Hotel Group?

Andrés: Sam is astonishing! He's such a young man. He's like Tinker Bell: throwing out possibilities and letting anyone fly. He came to me by scouting. The Bazaar is a first and I like to be at the beginning.

RH: So he found you?

Andrés: I got a phone call from one of his people. After almost a year of going back and forth, Sam asked me to join him. We've been working on this project for about two years. What I had to offer was simple. My restaurants are very affordable. And my team and I can create any concept: Turkish, Mexican, Lebanese, Spanish, Latin, creative or traditional. Probably, what SBE saw in me was the possibility of doing multiple concepts.

RH: What is special about your relationship with SBE?

Andrés: They have the willingness, the dream and a team of great people, like designer Phillipe Starck.

RH: Will you be part of future SBE hotels?

Andrés: We have been putting our energies into opening this one. I think we are going to go to sleep together first and then we'll know if we want to stay married. On paper we are planning more.

RH: Many articles have said you had the first tapas restaurant — Jaleo — in the U.S.

Andrés: It is not true! When I came to the U.S., many places had tapas, but portions were huge. We wanted to recreate the spirit of tapas like they are in Spain, where the portions are small. Our menu was 60 or 70 tapas long. That's what made us different.

RH: When did you start cooking?

Andrés: I was a poor student. Cooking was a natural way for me. I chose cooking instead of repairing cars. I grew up with a love for shopping, cooking, watching my father and mother cooking. Going to a restaurant 20 or 30 years ago was something rare. It was done for a need. There were not the thousands of places there are now. Cooking at home was needed to maintain the family. At the beginning of each month, dishes were richer; toward the end of the month there was less meat and fish, more grains, rice and vegetables. As a child, I loved the end-of-the month foods.

RH: You seem to have become sort of an unofficial ambassador for Spain. Why do you do this?

Andrés: There are few Spanish chefs in America. Mainly they are in the biggest cities — New York, Boston and Chicago. We still don't have big Spanish restaurants. But we will — it's coming. I've been talking about Spain for so long, it has become a weight. I am so much more than that. I can't just abandon Spain completely, because that is who I am, too. The truth is, the way I am moving every day, you're going to see less Spanish cooking from me. I am bringing in young, talented and successful Spanish chefs, and they will carry the torch.

RH: During your TV shows, is everything scripted or do you just talk informally?

Andrés: You can ask my producers. They've been trying to put me on a script. But this is not happening. What I create is an idea, like the Spanish show. We did probably 350 shows and every show had a theme. My show in Spain was hot! But all this TV work was moving me away from cooking. My wife told me, in a clever way, “It's very simple, if you want to be a TV star, we'll move to Spain because (there) we are known. Or, you can stay here in the U.S. and be a chef. And use TV to sell your message.” My mission is to tell America about Spain. For the Made in Spain show, I use the history, cooking and ingredients of Spain.

RH: On TV, you are known to say, “ the sauce is not happy” or “the rice wants to do this.” Do you feel a connection to the food?

Andrés: I do. I look silly when I share it with other people. When you've been at sunrise in the middle of nowhere, with purple flowers everywhere, and you see one flower opening, it is astonishing. Today, we are exposed to everything and are not surprised at anything. Humankind is becoming immune. I don't want to lose that power of surprising myself.