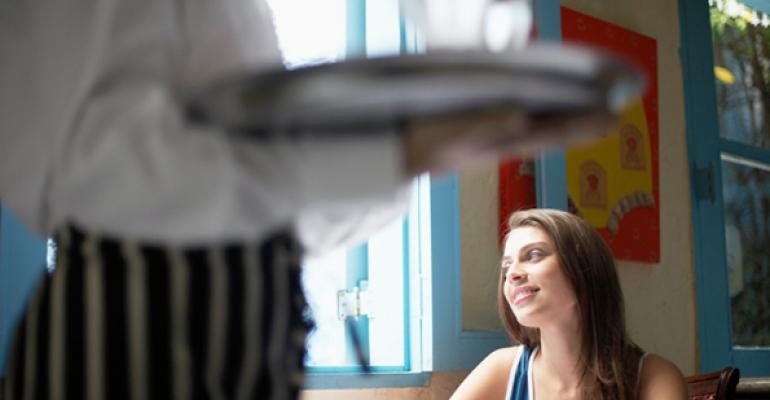 When good service gets annoying

I read a recent report from a big-city restaurant critic who had issues with servers and other front-of-the-house personnel who constantly seek customer approval for menu items served. “How are you liking that?” “Isn’t that wonderful?” He resented restaurant employees who approach a table with the express purpose of soliciting praise for the food. These questions have replaced the classic waiter questions customers really want to hear: “Is there anything else I can get you?

I recently wrote a column about how annoyed I was during a group luncheon that was constantly interrupted by a server who did not have the finesse to handle ordering and service without getting in the way of conversation at the table. [see the June issue: The Art of Approaching the Table]

If you’re a regular reader of this column, you know how frequently I complain about abysmal service. I’m talking about servers who fail to touch a table within 15 minutes; servers who forget to put in customers’ orders; servers who disappear for long stretches while customers need assistance.

This is truly abysmal service and there is no excuse for it.

The two examples cited above are more likely cases of restaurants trying too hard. If the worst thing that happens to me in a restaurant is overly attentive table service, it will hardly ruin my day. What bothers me and most of your customers is dealing with second- and third-string servers.

The critic suggested these solicitous service questions often replace the question customers really want to hear: “Is there anything I can get you?” Instead, perfunctory questions about the food come at the expense of water glasses not being filled or plates being cleared, he says. I was not with this critic when any alleged offenses occurred, but it’s been my experience that restaurants that try too hard don’t generally drop the ball on the basics, like replacing a napkin that hits the floor. It’s more a question of fine-tuning a service strategy.

So, if you’re one of the lucky restaurant operators who have talented servers who can implement a service plan, then take a look at the plan itself. Is what you’re doing really an expression of superior service, or has it crossed the line and become an annoyance?

I’ve frequently written in this column that you have to sit in your own restaurants to periodically observe how your staff is performing and how customers are reacting. You may think that your team is performing flawlessly, and they just may be according to how you trained them, but look at the faces and body language of your customers. They may be telling a different story.

I’d love to hear your thoughts about the above scenarios. Please email me.