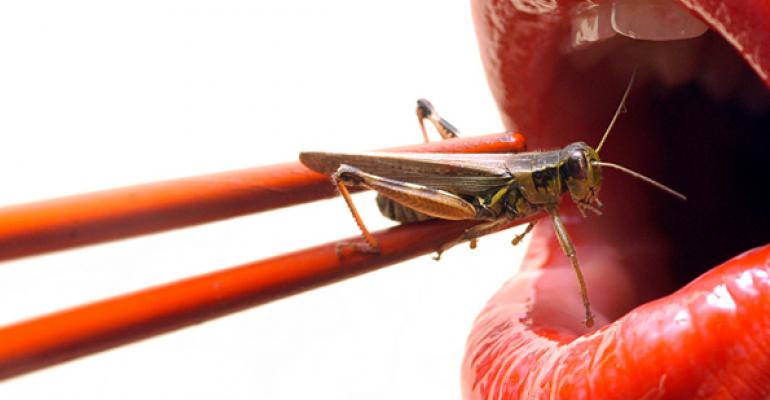 More chefs have bugs on the brain

Scientists keep arguing that insects hold the key to the world’s growing demand for protein, and some chefs are taking that to heart.

BBC News reports that a number of upscale French restaurants have been adding insects to their menus. In Nice, Michelin-starred Aphrodite offers an “alternative food” menu that includes foie gras along with mealworms and crickets. And in Paris, Le Festin Nu serves palm weevils with beets and truffle oil, water scorpion with preserved peppers and black garlic and grasshoppers with quail’s eggs.

Aside from reservations from skeptical guests, the biggest obstacle to more insects on menus, according to the BBC News report, is the lack of large-scale insect farms.

Meanwhile, a restaurant in Melbourne, Australia is raising its own crickets and hopes to add them to the menu soon. Matt Stone, chef at Silo, is working with a horticulturist to raise and harvest a selection of “protein snacks.” The bugs are deep-fried and seasoned with pepper and lemon myrtle; Stone also plans to create a bun from crushed cricket meal.

According to The Age, “deep-fried crickets may not be that healthy, but they are good for the planet,” citing a 2013 United Nations that indicated cricket harvesting requires up to 12 times less feed than cattle ranching. Silo is touted as a zero-waste restaurant.