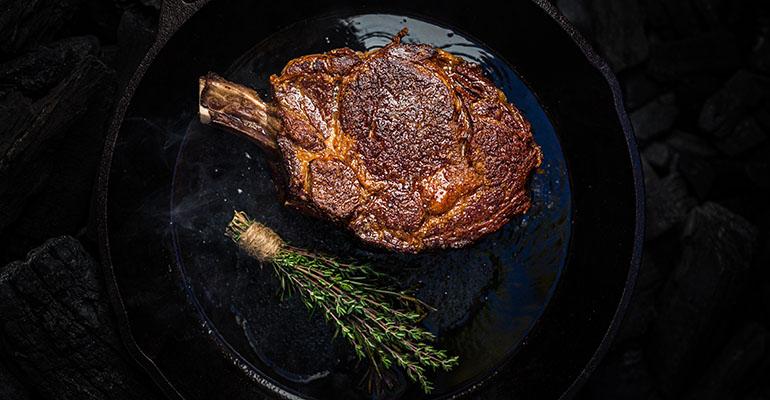 A new virtual restaurant brand focused on delivering a high-end steakhouse experience to consumers’ homes has begun operating in Los Angeles, with aggressive plans for expansion.

Robert Sulatycky, a veteran of Bocuse d’Or culinary competitions and former executive chef at the Four Seasons Hotels in Toronto and Chicago, partnered with co-founder Paul Abramowitz, a self-described serial entrepreneur, to create The Finishing Gourmet. The concept seeks to duplicate as much as possible the quality and high-touch experience of fine dining, complete with complimentary steak knives and a chef’s torch to finish off the crème brûlée.

“We have sacrificed absolutely nothing in terms of quality,” said Sulatycky.

Entrées include USDA Prime beef cuts ranging from a 10-ounce filet mignon for $69 at the low end to the 39-ounce cowboy ribeye for $139 at the high end, along with a handful of poultry and seafood selections, a range of side dishes and Regis Ova Caviar, priced from $100 to $1,000. 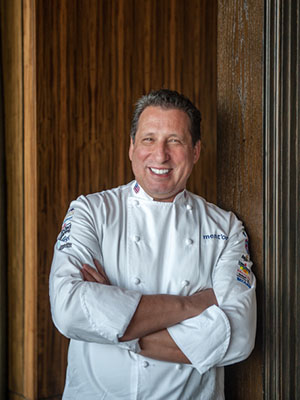 Photo: Robert Sulatycky, executive chef/partner at The Finishing Gourmet, is a 30-year industry veteran who previously had been executive chef at The Four Seasons Hotels in Chicago and Toronto.

The food can be ordered via Tock or by phone, and is delivered by an in-house staff of veteran fine-dining servers, using The Finishing Gourmet’s own delivery vans.

Sulatycky and Abramowitz said keeping the delivery in-house, and employing fine-dining servers displaced by the pandemic, helps maintain quality control between the kitchen and the customers’ homes.

The Finishing Gourmet is seeking to differentiate itself in the off-premise fine-dining niche by offering a high level of food quality, presentation and service throughout the process, they said. That comes with a $30 delivery fee.

The delivery area currently includes addresses within about 15 miles of the company’s commercial kitchen in the Hollywood area of Los Angeles. The company employs a staff of 10 personnel, including four drivers.

Sulatycky said he spent nearly two months perfecting a total of 82 recipes to create a menu of high-end, scratch-made dishes using top-of-the-line ingredients, road-tested to ensure that they maintain their integrity during travel.

“It’s one thing to develop a recipe and serve it to a table that’s 20 feet from the kitchen,” he said. “It’s another to take it to a residence or an address that could be 20 or 30 minutes away.”

While Sulatycky focused on refining the menu, Abramowitz focused on finding containers that both match the quality of the food and protect its integrity and temperature. The Finishing Gourmet uses resealable glass jars for many of the dishes, including sides, sauces and seasonings, and has what it described only as “a patent-pending hot-cold delivery system.” 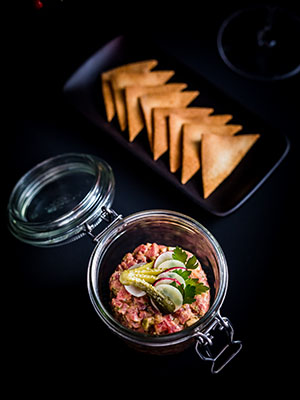 Photo: Customers receive steaks fully cooked, with instructions for searing them to finish at home.

Sides that the Sulatycky created to withstand the rigors of delivery include Scalloped Russet Potatoes, Rosa’s Leek Creamed Baby Spinach, Sweet Corn Pudding and Pan Roasted Market Mushrooms, each priced at $19. Others include a Hand Rolled Ricotta Tortellini Mac ’n’ Cheese and a TFG Lobster Mac ’n’ Cheese, priced at $15 and $39, respectively.

In written instructions, The Finishing Gourmet recommends that customers sear their steaks in a pan for a few minutes just before serving. Steak orders include complimentary tongs for turning the steak in the pan and some olive oil for searing, as well as salt and pepper for seasoning. The delivery is designed to be contactless, but servers are able to answer questions, if necessary.

Abramowitz said the small amount of at-home prep — including searing the steaks and caramelizing the crème brûlée — actually adds to the enjoyment of the meal. 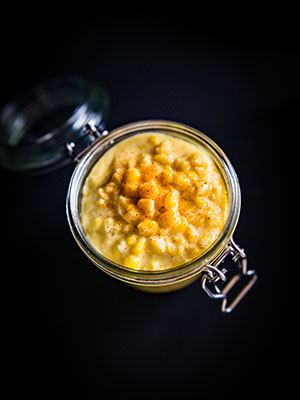 Photo: Glass containers are used for sides, sauces and condiments, such as Sweet Corn Pudding, left, and Steak Tartare.

“It’s a not a meal kit, where you spend an hour or an hour and a half,” he said. “It’s five minutes to the table.”

The company launched the concept in early January, and plans to begin marketing it more heavily this week, leveraging positive reviews received from Food & Wine and the Robb Report, Sulatycky said.

Sulatycky and Abramowitz said they are planning to expand The Finishing Gourmet first to nearby Orange County in the coming months, and then to other markets, including Seattle, New York, Miami and others.

They also hope to be able to offer the systems they developed to other chefs seeking to provide similar “restaurant at home” experiences.