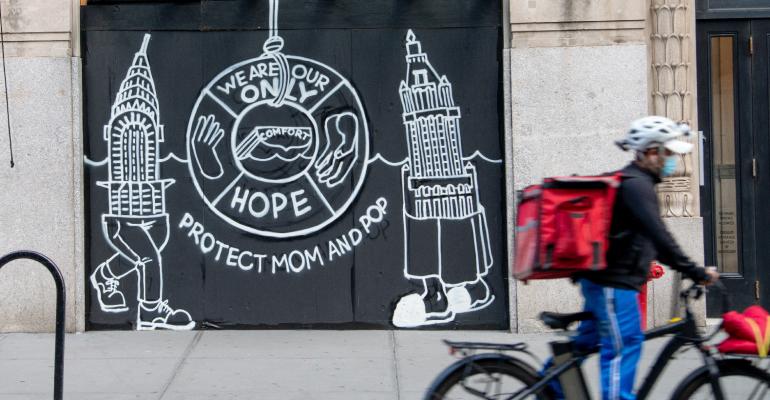 Alexi Rosenfeld/Getty Images Entertainment
Delivery workers in New York City are essential under curfew, but the new nighttime restrictions are another thorn in the restaurant industry's side.
Operations>Delivery & Takeout Solutions

As local curfews are put in place in response to protests and riots in major urban areas, restaurants are left to pick up the pieces again

As mayors and governors across the United States struggle to quell political unrest, restaurant operators face yet another challenge: newly imposed curfews. As protests and riots continue, curfews have been put in place in major urban areas across the country.

Although many of these curfews were temporary measures over the weekend at the height of the political unrest, several urban hotspots will have curfews in place through the end of the first week of June, including New York City, Arizona, and Louisville, Ky. In most cities, only essential workers are allowed to be out after the curfew begins, but in many cases it is unclear whether or not that includes food workers.

For example, in the original curfew guidelines for New York City, put in place on June 1 and extended until June 7 from 8 p.m. until 5 a.m., New York City Gov. Andrew Cuomo’s office stated that “essential workers going to and from work and doing work” were exempt from the curfew restrictions as long as they carry a work ID, but did not specify whether or not restaurant workers were deemed essential. The governor’s office only clarified that restaurant workers were part of the exempt group two days after curfew began.

Jeffrey Garcia, a restaurant owner in the Bronx and the president of the New York State Latino Restaurant and Bar Association, told Eater on Tuesday that when he heard about the curfew, he assumed that essential workers were limited to healthcare professionals like hospital workers.

“The fact that city food delivery workers who work overnight to restock shelves are messaging me frantically right now not sure if they can work tonight with the abruptly announced city curfew tells you a lot about the state of government right now,” New York City councilmember Mark Treyger, who represents areas of Brooklyn, tweeted on Monday. He later expressed concern that the city still had not given written guidance as to how to protect immigrant workers afraid of being asked for identification.

NYC still has not issued written guidance as to how they plan to protect food delivery workers who work overnight to restock shelves and are fearful of being stopped by police and asked for documentation. https://t.co/QnDqxy6miE

After initial confusion during the first 48 hours of the curfew, Gov. Cuomo’s office clarified that restaurants are allowed to make deliveries after 8 p.m., that delivery workers are deemed essential, and that they will not be required to show identification or report their immigration status if stopped by the police. Bike-sharing services like Citi Bike — which are often used by delivery drivers in New York City – will be unavailable to delivery workers after curfew begins, but even though ride-sharing services will not be available to the general public, they will be available to essential workers after curfew begins.

The confusion surrounding curfews extends to other locales as well. In Arizona, where the statewide curfew lasts from 8 p.m. until 5 a.m. through June 8, “obtaining food” and “patronizing or operating private businesses,” as well as travel needs to get to and from those businesses are exempt under the state emergency curfew guidelines. But despite the fact that they had been closed due to coronavirus for more than two months, some Arizona restaurants are choosing to stay closed during the curfew.

“It's like riding a motorcycle. You hit one pothole and you might lose your balance but be okay,” Phil Johnson, owner of Trapp Haus, a barbecue restaurant in downtown Phoenix near the site of major protests in the city, told AZ Central. “But if you hit two more potholes you might be off the bike.”

Some restaurants, like Hawaiian eatery Loco Style Grindz, are choosing to close altogether as long as the curfew is in place. Owner Hinano Lino said that since his restaurant does not open until 7 p.m., it would not make sense just to open for one hour.

In the wake of the constantly shifting city and statewide curfews, third-party delivery companies are working with city and state governments as much as they can to keep their delivery workers safe and their services legal.

“We're evaluating the situation in each city individually and making decisions based on what we hear on the ground from local officials, restaurants and drivers,” a Grubhub spokesperson said in a statement. “In some places, we’re suspending operations temporarily because of curfews or local updates. In other places, we’re continuing to operate cautiously and serve the community. But in all cases, we’re monitoring closely and will not hesitate to take action if needed to protect the safety of our drivers, restaurants and diners.”

Other third-party delivery companies released similar statements, with DoorDash also saying they’ve suspended service where necessary and Postmates stating that they “are working directly with mayoral administrations to balance our essential services designations with the curfew orders as each municipality has a distinct approach.”

All three delivery services declined to state where they’ve suspended operations temporarily, and Uber Eats did not respond to request for comment in time for publication.

Here is a list of all of the curfews across the country still in place beyond June 3:

Arizona — statewide curfew in effect from 8 p.m. until 5 a.m. through June 8.

Cleveland — Citywide curfew in effect from 8 p.m. until 6 a.m. through June 5.