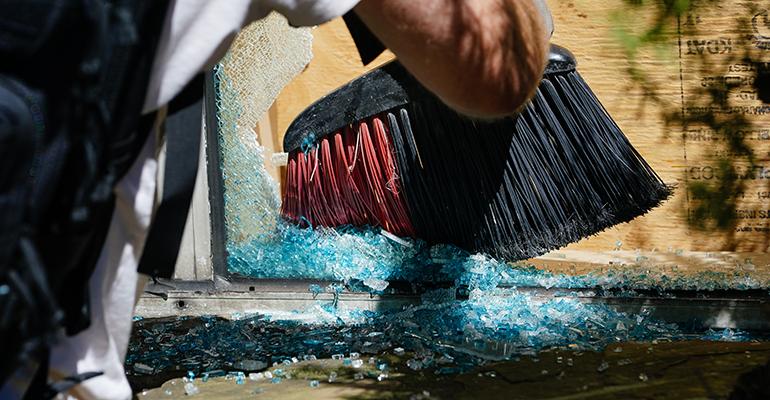 Elijah Nouvelage / Stringer / Getty Images News
Restaurateurs and chefs react to the protests that are resulting in broken windows and looting while supporting #BlackoutTuesday and Black Lives Matter.
Operations

On Tuesday, people were invited to participate in #BlackoutTuesday, blacking out all promotions and content that didn’t further the Black Lives Matter (BLM) movement or address ongoing protests against the recent death of George Floyd at the hands of a Minneapolis police officer.

On Instagram, #BlackoutTuesday presented as a black square with the hashtag and on Twitter, either a photo or simply the hashtag. Those in the restaurant operators saw #BlackoutTuesday as an opportunity to join in the national conversation about race and justice, vent their own emotions or rally support for the movement.

We are listening, learning, and we know we can always do better. There is room for everything and everyone but hate at our tables. #blackouttuesday pic.twitter.com/B6flq4jh3c

The Rubio’s family celebrates diversity and inclusion, and we stand in solidarity with the Black community and those speaking out against the inequalities and injustices in our country. #blackouttuesday pic.twitter.com/O6HgEY0kHq

Political unrest has also led chefs have to share their own personal experiences with racism.

“The helicopters are gone. But I can’t relax. I am exhausted, and all the sunshine and loveliness of the day are a mockery,” wrote Garrett Oliver, Brewmaster of The Brooklyn Brewery on Twitter about being a black man in born and raised in NYC.

I am fortunate to have a roof to sit on in nice weather. Last evening, as I was having “Zoom drinks” with a friend, the sky above me buzzed with a half-dozen helicopters, so loud they drowned out the conversation. The Barclay Center is a 10 min walk from my house in Brooklyn.

Marcus Samuelsson, chef-owner of Rooster in Harlem, a neighborhood in NYC, has already been working with Jose Andres’ World Central Kitchen to donate food to restaurant workers and other community members who are in need. As one of the few famous chefs of color, Samuelsson knew he had to speak up.

He not only attended the peaceful protests over the weekend in Harlem,

Participating in yesterday’s peaceful protest in Harlem felt amazing — I’ve never been prouder to be a member of this great community. During times of injustice and when people are in need, it’s so important that we mourn, reflect, plan, and respond for those who can’t, and (1/3) pic.twitter.com/VtDs71AoIX

but he spoke with The Economist’s podcast, The Economist Asks, on what it’s been like to “fight for the restaurant/hospitality community in economically disadvantaged areas, feeding frontline healthcare workers and our neighbors in need, and also the overt racism and police brutality that continues to persist in America.”

Thank you @TheEconomist for a honest, heartfelt conversation on my experiences as a Black man and business owner in America today. We had a wide-ranging discussion on the harsh reality our country is facing right now, reflecting on what it has been like to fight for the (1/3) pic.twitter.com/WVsl12YU8G

Chef Kevin Gillespie took to Instagram to write about the racism he has inadvertently propagated in the past saying, “I am guilty of racism. Not because I wanted to be, and not because I intended to be, but because I haven’t tried hard enough to recognize everywhere it exists.”

I have tried to live my life by a code of ethics. One where you can own the mistakes you have made, regardless of intention. I wrote this not because of something I knowingly did, but rather because I know it to be a true statement. I don’t mean it to be an attack on or incrimination of anyone else, nor as some sort of statement of politics. For me, the only way to improve is to openly acknowledge my shortcomings and then work with purpose to correct them. The truth is that I don’t have any big ideas on how to save the world, but that won’t stop me from trying. This is a start.

Many more chefs and restaurateurs spoke up, from Geoffrey Zakarian

Hey Asian Americans. Call your parents and make sure they understand how George Floyd was murdered, the necessity of the protests and the need for solidarity with @Blklivesmatter pic.twitter.com/bdVrMtXjm5

Beginning this week with deep sadness, introspection, and determination to actively confront institutionalized racism that must be expunged from our nation before we can even begin to believe in E Pluribus Unum. Committed to constructive conversations @USHGNYC. #BlackLivesMatter

Because of the publicity and outrage, some restaurant companies have made changes to policies. &pizza is now providing employees paid time off for activism,

In memory of George Floyd & in UNITY always.

From this day forward, @andpizza will be giving its employees paid time off for activism. pic.twitter.com/j6Capnl37t

and momofoku announced its NYC restaurant would reopen as a donation-based to-go restaurant where every dollar would go to charities furthering the BLM movement.

we stand in solidarity with @blklivesmatter. next week, we are opening 207 second ave as a donation-based to-go restaurant. every dollar will go to @blackvisionsmn, campaign zero, and @reclaimtheblock. more info soon. our letter to our team: https://t.co/5GRGwUp14w

The National Restaurant Association also put out a statement about the movement and provided a link to its affiliate, the Multicultural Foodservice & Hospitality Alliance, as a resource for operators.

Find resources to promote diversity and inclusion in your restaurants and foodservice businesses here: https://t.co/zt5R8NgFMI. pic.twitter.com/M5BSUaVm4p

In Santa Monica, Calif., Socalo had its windows and doors smashed by looters, but the restaurant by chefs Mary Sue Milliken and Susan Feniger took to social media to show support for protesters and the Black Lives Matter movement.

We understand the anger, the hurt, the frustration, and commend all those peacefully protesting these injustices. We continue to support the BLM movement and believe that their voices should be heard. Please stay safe, be smart, and respect one another out there. pic.twitter.com/oNqEtgKVEd

In Omaha, Neb., Block 16 acknowledged that “a lot has transpired over the past week” but they “want to provide a sense of normalcy to those who need it” along with a photograph of the restaurant’s fried chicken sandwich.

We are open today. It isn't as simple as business as usual. A lot has transpired over the past week. We want to provide a sense of normalcy to those who need it. That being said we are pro change & are going to spend some time looking inward on what we can do to facilitate change pic.twitter.com/l5G4maC2Oz

Have a story to share? Email me at [email protected]