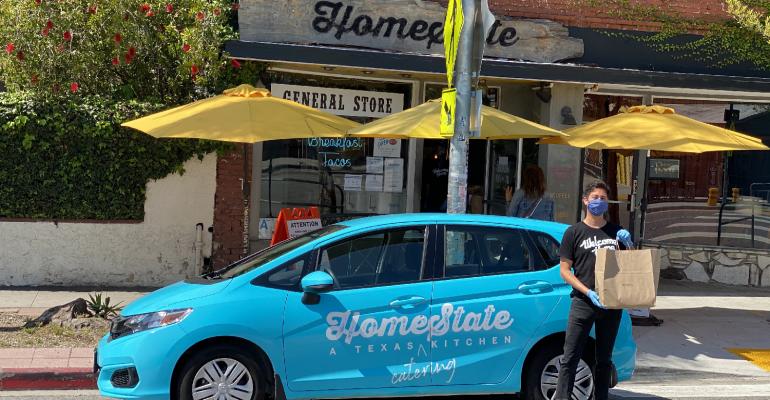 Citing safety concerns with third-party delivery partners, the Tex-Mex concept tapped its own employees and catering vehicles to make the switch

Like many restaurant operators around the country, HomeState has pivoted to a business model focused on off-premises sales of prepared foods, combined with a menu of grocery items.

That menu, however, does not include half-full containers of milk.

When a HomeState customer received a third-party delivery that included an open container of milk with some of the contents missing — apparent sampled by a thirsty driver — it was the “last straw” that made Briana Valdez, owner of HomeState, decide to take delivery in-house at the three-unit Tex-Mex chain, based in Los Angeles.

“The guest was very forgiving,” Valdez said. “But I couldn’t say, ‘Well, that wasn’t HomeState; that was somebody else.’ In her mind, that was the HomeState experience.” 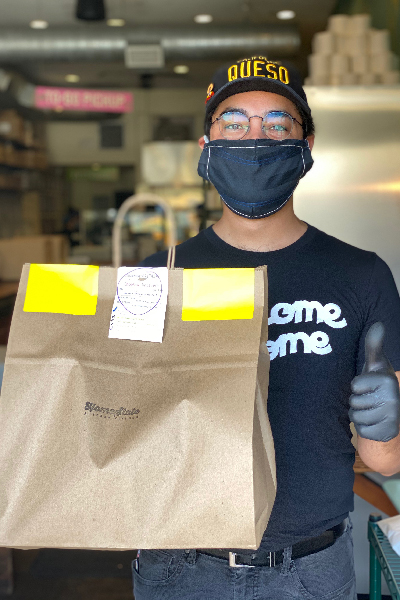 The decision had already been brewing, Valdez said, because of the way the third-party-delivery firms that HomeState worked with — which she described as “all the usual suspects” — had responded to the crisis.

“I never got one email from any of the companies to let me know there were any measures that they were taking to protect their drivers, our teams at the restaurant, or the guest,” she said. “It was about waiving commission, or reducing the commission by half. It was a commission-based conversation. It wasn't safety-based.”

Although Valdez said the restaurant has had many positive experiences with third-party drivers, some were showing up to pick up deliveries without wearing masks, and were not adhering to social distancing protocols.

The anxiety of trusting the restaurant’s products to the hands of unknown drivers became too much, she said.

The company suspended delivery for five days to bring the service in-house, using four existing employees and the two cars the company had recently purchased for catering.

HomeState began by offering the delivery service only from its Hollywood location, but Valdez said she was planning to expand it to the Playa Vista and Highland Park restaurants in the coming weeks.

Employees and investors have supported the transition to in-house delivery, she said.

She consulted with some other restaurant operators and with HomeState’s online ordering partner, ChowNow, which previously had been routing HomeState’s delivery orders to third-party firms. By examining data from HomeState’s previous orders, ChowNow calculated that HomeState could recapture more than 50% of its delivery sales by offering the service to customers within one mile of the Hollywood restaurant.

Knowing that it would be a logistical challenge at first, Valdez decided to start slowly, and adhere to the one-mile limit. HomeState sent messages to its extensive email database and to its 23,000 Instagram followers, and ChowNow began routing all delivery orders directly to the restaurant. The messages highlighted the restaurant’s focus on protecting the health of its workers and employees.

“It's gone really smoothly,” said Valdez. “Working with a one-mile radius, and without traffic in L.A., allows our drivers to quickly make deliveries.”

In mid-May, about four weeks after the initial introduction of in-house delivery, the chain expanded service to a 1.5-mile radius from the Hollywood store.

Drivers generally handle about three deliveries per trip, and have stayed busy, she said. HomeState charges customers a flat rate of $4.99 per delivery.

In-house delivery now accounts for about 6.8% of total sales, compared with 13.4% previously, Valdez said, or slightly more than 50% of the previous share of sales volume. She hopes to be able to recoup 75% of the lost volume through the expansion of in-house delivery to her other two locations and the addition of more cars and drivers.

“At this point, we are needing to hire people to help us meet the demand for delivery,” said Valdez. “I suppose it's a good problem, but we do need people in-house who are trained on our standards.”

The company is considering acquiring more cars and having its employees use their own cars. Valdez has already purchased the magnets to place on the sides of cars ready for when the need arises.

Valdez said she is considering retaining delivery in-house in the post-pandemic environment, and she has been researching software HomeState could use to better manage delivery logistics.

She added that despite her misgivings about the third-party delivery firms during the crisis, she still appreciates the fact that they were mostly good partners up until that point, and had helped her build out the company’s off-premises sales.

Like many operators, however, Valdez cited some longstanding challenges with working with the third-party firms, such as overly aggressive drivers. Other restaurant operators have cited the lack of a direct relationship with their customers when using third-party delivery, and the high costs of using the firms.

“Hopefully, this can lead to some productive and healthy changes within the industry,” Valdez said. “We're all adapting right now, and we all have a role to play.”