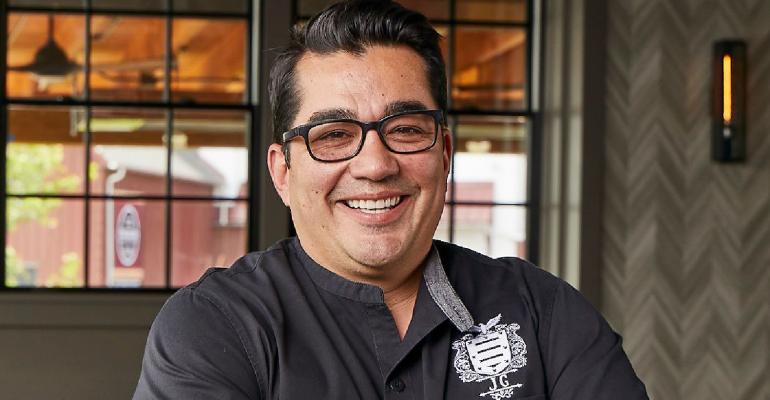 Mike Persico
Jose Garces will be expanding all of his virtual concepts.
Operations>Delivery & Takeout Solutions

Garces Group — the hospitality brainchild of Iron Chef Jose Garces — announced on Sept. 24 that their Philadelphia-based, fast-casual taqueria, Buena Onda, is expanding nationally through a network of both virtual and brick and mortar stores, starting with a second location – a ghost kitchen that just opened in Washington, D.C.

Moving forward, Garces Group will add more virtual locations in the Florida, New York and Massachusetts markets; and they’ll look to build brick and mortar stores in Philadelphia and Washington, D.C. Additionally, Garces Group is looking to expand their other virtual concepts, Livy’s (a plant-based brand named after Garces’ daughter) and Wow Wings (World of Wings) to new markets.

“What we found was that every time that we opened Buena Onda for indoor dining [in addition to delivery and takeout during the pandemic] that there was incremental improvement without cannibalization and so we found ourselves virtually double doubling the revenue,” Campanella said. “We developed a dining pattern during COVID which revealed the elastic nature of the business and how well it communicated to off-premises solutions.”

Buena Onda, at both the brick and mortar Philadelphia location and the ghost kitchen in D.C., features a menu of guacamole, nachos, and several types of classic tacos. Campanella is well-aware that owning and operating virtual wings and tacos concepts — two of the most popular food categories for ghost kitchens — will be challenging, especially with so much competition.

“There are red water and blue water opportunities; when there’s blood in the water it’s red and when it’s blue water, you’re clear and open,” he said. “Operating a virtual wing concept is definitely red water—there’s so much congestion. But if you open a concept that’s delivering breakfast in the middle of the night, for example, you get to sit and claim the space in those markets.”

Before 2020, Campanella said he had no idea what a ghost kitchen was and now because of overhaul of the hospitality industry during the pandemic, he’s coming up with completely new strategies for how to best out competition. Tacos might be closer to a “red water” situation with a lot of competition, but they’re able to stay one step ahead of competitors by making sure that the quality of Buena Onda’s food is not lost in transit to a customer’s home. They had specially made bifold containers that hug the tacos so that they don’t fall apart.

Another important aspect of their success is the brand name value of Jose Garces, who people know and trust to deliver memorable food. But surprisingly, mastering Google algorithms has become increasingly important to master, so that Buena Onda tacos or Wow Wings comes up when a user is trying to Google what they want for dinner.

“Last year, I found myself sitting there in front of 20 managers saying, ‘listen, get your head around this because we're no longer a food and beverage company; We're an IT company now,’” Campanella said.

The more people find their website and app, the more Garces Group’s concepts will be bumped up in Google search results.

Besides perfecting their digital space (and Google SEO), Campanella said they’ve been working on the expansion of their virtual brands through physical spaces. The goal, he said, is to partner with independent restaurants that can serve as kitchen commissaries to house their concepts in the back of the house. In return, small businesses that were struggling during the pandemic get a revenue boost. For example, for this D.C. iteration of Buena Onda, they will be partnering with local catering and events company SuperFd.

But Garces Group’s future ratio of brick and mortar to virtual restaurants is yet to be determined.

“The fact is, we don't know where it's gonna go,” Campanella said. “I think this is really a matter of how quickly our country heals. The concern is, the more we heal, are people going to want to be out and celebrate in person and will ghosting become less relevant?  Or will it hold some new kind of position in the industry.”