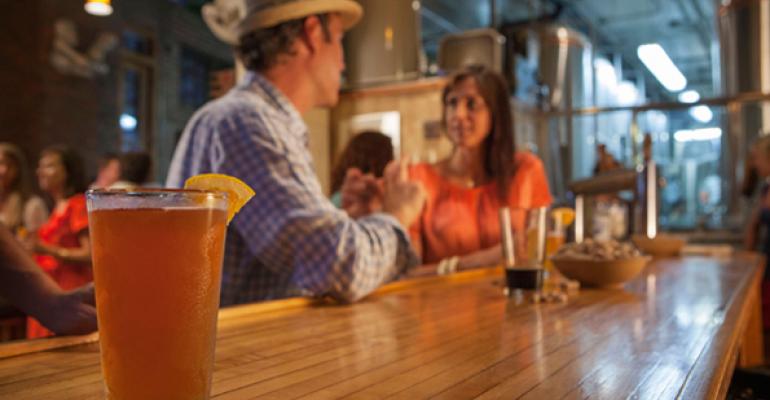 Gallup: Is the beer boom about to go bust?

Here’s something to think over as you plan the future direction of your restaurant’s bar program. A new Gallup poll finds that almost as many U.S. consumers now prefer to drink wine (35 percent) as beer (36 percent), while another 23 percent prefer liquor.  And who’s leading the shift away from beer to other types of alcoholic beverages? Younger drinkers.

These results might seem surprising, given the recent rise of all things beer-related. There are thousands of interesting beers now available—artisan brews, craft brews, nanobrews, hundreds of once-obscure imports and more. And there are a corresponding number of bars and restaurants that have built a solid business around them—brewpubs, beer-centric sports bars, gastropubs and the like. Even serious chef-driven restaurants now routinely install wide-ranging beer programs, seemingly the more taps the better.

Taken together, you’d assume consumers have an insatiable thirst for beer. But the Gallup numbers suggest that while the supply of great beers and cool places to drink them may have increased, overall demand has not. In fact, it appears to be going the other way. If you were thinking that bigger would be better for your restaurant beer program, look closely at Gallup’s number.

Gallup’s annual Consumption Habits poll was conducted from July 10-14. It asked U.S. consumers whether they drink alcohol or not—60 percent do at least occasionally, close to the historical average—and what alcoholic beverage they prefer. Gallup has been tracking U.S. drinking habits for the past 71 years, and the recent results have not been kind to beer.

“Young adult drinkers' alcoholic beverage preferences have changed dramatically over the past two decades,” Gallup reports. “In the early 1990s, 71 percent of adults under age 30 said they drank beer most often; now it is 41 percent among that age group. There has been a much smaller decline in the percentage of 30- to 49-year-olds who say they drink beer the most, from 48 percent to 43 percent, with essentially no change in older drinkers' beer preference.”

Slate writer Matthew Yglesias sums it up this way: “In other words, a cohort of beer lovers lost their taste for it as they became middle aged and was replaced by a new youth cohort that doesn't like beer that much either.”

So what are people drinking instead?

“Younger adults' preferences have shifted toward both liquor and wine, but more so toward liquor, over the past two decades,” Gallup found. “Those between the ages of 30 and 49 have moved exclusively toward liquor. Older Americans now increasingly say they drink wine most and are less likely to say they drink liquor most. Despite these changes, beer remains the preferred beverage of 18- to 29- and 30- to 49-year-olds. Wine continues to rank as the top choice of those 50 and older.”

“Most key subgroups have shifted away from beer as their favorite alcoholic beverage, but this trend is particularly pronounced among younger Americans and minorities,” Gallup analysts conclude. “These demographic patterns, should they persist, suggest that beer may not return to its position from two decades ago as the dominant preferred alcoholic beverage.

“Yet beer still ranks as the preferred beverage among young adults and is tied with wine among minorities, so unless wine or liquor eclipses beer as the favorite alcoholic drink among these groups, it doesn't appear that beer's position will grow much weaker in the coming years.”

Restaurant operators have a keen sense of the ages and genders of customers who frequent their establishment. Only you know whether it would make more sense to hire a mixologist, beef up your wine-by-the-glass program or add more beer taps to boost the revenue coming out of your bar. But you may wish to keep the top-line results of the Gallup survey in mind as you make that decision. It’s the kind of trend information that’s hard to find anywhere else.