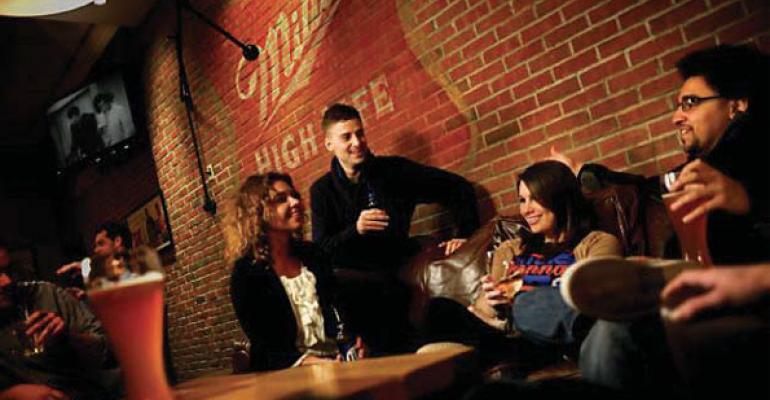 Microbrews have become so popular they’ve set off a de facto arms race to see which restaurant can offer customers the widest variety of craft beers. Even-more-obscure nanobrews appear to be the next beer trend operators will embrace.

But that doesn’t mean well-known but less-trendy megabrews don’t have their fans. For every craft brew aficionado who will pay big bucks for an artisan-crafted microbrew, there are plenty of Joe Sixpack-types who prefer familiar mainstream brews when they’re out at a restaurant or bar.

That’s part of the strategy Marcus Hotels & Resorts is following with its new Miller Time Pub & Grill concept. The Milwaukee company has partnered with the number-two U.S. brewer, MillerCoors, to create a gastropub with 25 draft beer options and 50 brands of beer, all from MillerCoors. It’s located in the Marcus-operated Hilton Milwaukee.

You say MillerCoors has no trendy beers in its lineup? Not per se, but its brand portfolio commands 26 percent of the U.S. beer market. All craft beers combined have just a six percent share.

One key difference between megabeers and craft beers: price. Not every customer who patronizes restaurants that offer both good food and a wide variety of beers has a ton of money to spend. Another factor: well-known beer brands have a vast reservoir of brand equity driven by massive ad spending.

Given that perspective, the Marcus approach seems smartly aimed at what has become an overlooked niche.

“The enhanced Miller Time Pub & Grill concept is about making memories in a comfortable, neighborhood restaurant with great food and great beer—all at a great price,” says Marcus sr. v.p. Chris Anderson. “The menu features a variety of craft burgers and appetizers that pair well with our beer selections. Whether you are watching a game on one of our many TVs or enjoying happy-hour specials with co-workers, friends or family, Miller Time Pub & Grill is a place to have fun, relax and enjoy the company you are with.”

A second Miller Time Pub & Grill will open at  The Cornhusker, a Marriott hotel in Lincoln, NE  this summer. Additional locations are being considered.