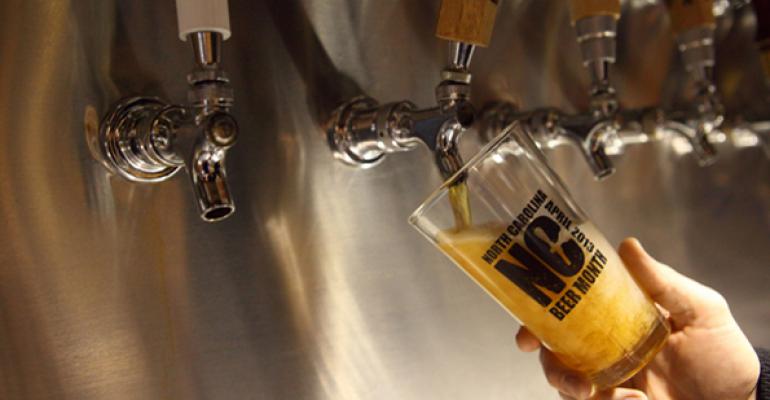 Raise your glass: Time to charge more for beer

If your restaurant’s beer program is designed to charge what the market will bear, get ready to raise your prices. New figures provided by beverage market data watchers Guest Metrics and Restaurant Sciences show that restaurants have been getting more money for every kind of beer they sell—low-end, midrange and craft.

Most operators are already aware of the explosion of customer interest in, and budget for, craft and artisan beers. We’ll get to Guest Metrics numbers that document how well things are going in that part of the market in a minute.

But first, let’s look at some pricing figures that come from Newton, MA-based syndicated data provider Restaurant Sciences LLC. The company found that beer pricing in what are known as the premium and subpremium tiers of the market—high-volume brands like Budweiser, Coors Light, Miller Lite, Pabst Blue Ribbon—has jumped anywhere from 3.5 to 6.8 percent over the last seven months.

Restaurant Sciences develops its number by analyzing more than $1 billion worth of guest-check sales data captured at restaurants and bars each month.

"While all the attention has been on craft (ultrapremium) beers, the price of mainstay brands in the midprice (premium) tier have risen more dramatically,” says Restaurant Sciences president Chuck Ellis. “And traditionally lower-priced beers such as Pabst Blue Ribbon have seen sizeable double-digit price increases in both restaurants and bars and nightclubs. In fact, the only segment of the restaurant industry holding the price line on these beers is the value-conscious family dining segment, with average per-party checks under $40."

Guest Metrics found plenty of good news as well when it analyzed its universe of restaurant and bar transaction data. Its numbers showed that the overall price average for beer in full-service restaurants and bars rose in the first quarter of 2013, with the increasing popularity of pricey craft beers helping to boost that average.

“While beer’s price/mix was up +3.2 percent during 2012 compared to the prior year, that accelerated to +3.6 percent during the first quarter of 2013,” says Bill Pecoriello, c.e.o. of GuestMetrics. “Looking specifically at the craft beer segment, its price/mix was up +3.5 percent in 2012 and accelerated to +3.8 percent during the first quarter of 2013. Additionally, looking at pricing in absolute terms, while craft and imports were generally at parity in 2011, the gap widened in 2012 as the price of craft increased faster than that of imports, and widened even further during the first quarter of 2013. However, in analyzing the various price tiers within craft, our analysis indicates that the increase in average prices was primarily the result of a mix effect as consumers increasingly chose more expensive craft beers,” he adds.

Which is to say, while consumers are searching for value in most aspects of their restaurant experience today, they willingly pay more for beer. If you’re looking for a part of your business where you can nudge prices and customers won’t push back, or perhaps even notice, your beer program is it.