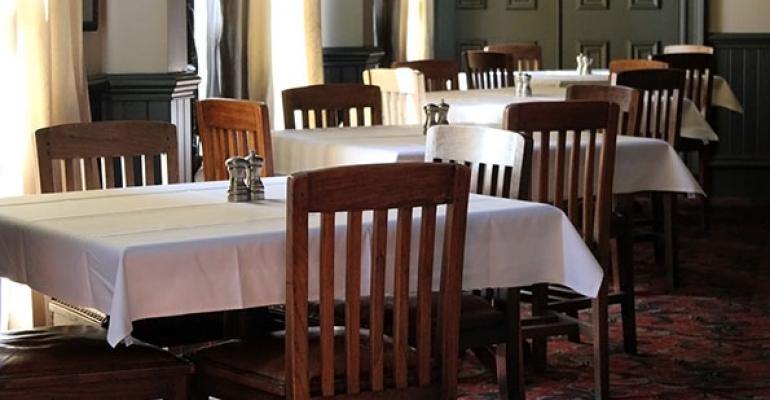 The business outlook for independent restaurants remains murky as operators struggle to compete against those with larger budgets, according to recently released data from two associations.

“The independents have been hit harder in the long-lasting economic downturn,” says Bonnie Riggs, NPD restaurant industry analyst. “Part of the reason we’re seeing the decline in independents is there have been a lot of unit closings—restaurants that haven’t been able to survive.”

NPD defines major chains as those with more than 500 units, while small chains have three to 49 units and independents have one or two locations.

Riggs attributed the decrease in traffic for independent restaurants to their less-hefty marketing budgets.

“Independents simply don’t have the resources and marketing power, and often not the business acumen, of chains,” Riggs says. On the other hand, she adds, “Many independents do succeed by providing the food quality and experience consumers are looking for and by building a loyal customer base.”

Chains have outperformed independents over both the short- and long-term the past five years, according to NPD. Major restaurant chains, which currently represent 64 percent of total industry traffic, have seen a 1-percent increase in visits since June 2010. Traffic to small chains, which represent 11 percent of industry traffic, was flat in that same time frame; and independents, which now represent 25 percent of foodservice visits versus 28 percent in 2010, saw 2 percent fewer visits since 2010.

Riggs says the restaurant industry typically comes out of downturns rather quickly, but the most recent economic recession has cut deeper than any other. She says NPD forecasts flat growth for the industry as a whole over the next decade.

“We have a consumer that has changed its behavior—and maybe for good,” she says. “They’re looking to get what they pay for.”

The forecast has led to mixed outlooks from restaurateurs on the future of their businesses, according to research from the National Restaurant Association.

Hudson Riehle, senior v.p. of the NRA’s research and knowledge group, says restaurant operators are less bullish about the direction of the overall economy.

“And rising wholesale food costs are once again starting to pose a significant challenge,” Riehle adds.

In July, the Department of Labor reported 1-percent price increases for finished consumer foods. Rising prices for meats and processed poultry, among other goods, outweighed falling prices for fresh and dry vegetables.

The NRA’s RPI is a monthly composite index that tracks the health of and outlook for the U.S. restaurant industry. It slipped to 101 in July, falling from 101.3 in June, the second consecutive monthly decline.

Traffic boosts for chain restaurants can be attributed to the quickservice segment, which generates 79 percent of foodservice industry traffic overall. Visits to QSR chain restaurants (major and small) were up 1 percent in the second quarter, reports NPD.

Despite the murky forecast, Riggs says there is a silver lining for independent restaurants. The next-generation consumer—Millennials aged 18-34—is looking for unique, personalized dining options that independents are able to offer more easily than big brands.

“It’s going to be a battle for market share, but there are going to be winners,” she says. “Millennials are not that fond of chains; they like the new, the different, the unique.”

To capture that audience, Riggs suggests a strong focus on improving a restaurant’s online presence. A restaurant’s website, she says, is where Millennials go to do research and follow-up on recommendations.