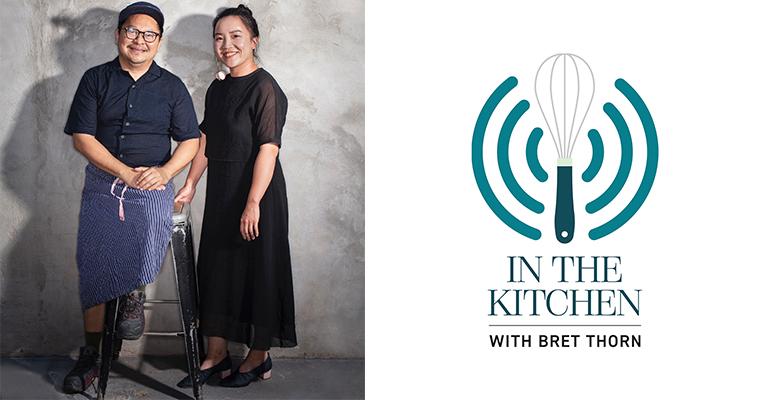 Pichet Ong and Lydia Chang reflect the change in Chinese food at NiHao in Baltimore.
People>Chefs

Baltimore restaurant reflects how the cuisine is changing with the times

On Nov. 3, as Americans were getting ready to hunker down for a stressful night of watching election returns, a number of search terms were trending on Google. Many were what you’d expect: “Exit polls,” “live election coverage,” perhaps the overly hopeful “who won the election today.”

But one of the top searches in the United States was “Chinese food near me.”

I can’t think of a clearer indicator that, for many Americans, Chinese food is comfort food.

It’s what they crave when they’re looking to calm their nerves, to simply turn off their brains and chew.

But Chinese food, like all food, is evolving. Chefs in China are using ingredients that aren’t part of their traditional repertoire, like cheese, and chunks of fruit. Chinese hotels are now cooking their dim sum in combi ovens.

In North America, ethnic Chinese people aren’t eating like their parents did. And Pichet Ong and Lydia Chang are reflecting that change at NiHao, a restaurant that opened in Baltimore this summer.

Chang is the daughter of chef and restaurateur Peter Chang, who came to the United States from Hubei province and worked as a chef in the Chinese embassy in Washington, D.C., before striking out on his own, cooking in Chinese restaurants throughout the Southeast and Chesapeake Bay areas. He now has Mama Chang in Fairfax, Va., and Q in Bethesda, Md., and he gave his daughter Lydia the keys to NiHao. The name is the Mandarin Chinese equivalent of “hello,” and the restaurant is meant to reflect the way that Chinese people eat now.

“Lydia and I wanted to present Chinese dishes the way we like to eat,” Ong said.

That means lighter dishes, with less oil and a more global pantry.

So the restaurant’s black pepper steak is made with hanger steak, and it’s cooked medium rare, “as opposed to well-done, or in unreliable shapes,” Ong said.

The beef is seared with a lot of black pepper and served in a sauce that is popular in parts of China with heavy Western influence.

“It is very typical in colonial Chinese restaurants,” he said. “You find it in Hong Kong, Taiwan, Guangzhou, maybe Shanghai,” said Ong, who grew up in Singapore — a Southeast Asian city-state with a majority-Chinese population — in the 1970s and saw this dish emerge as Westerners came to the city. “They like that, almost like a steak au poivre blend,” he said. 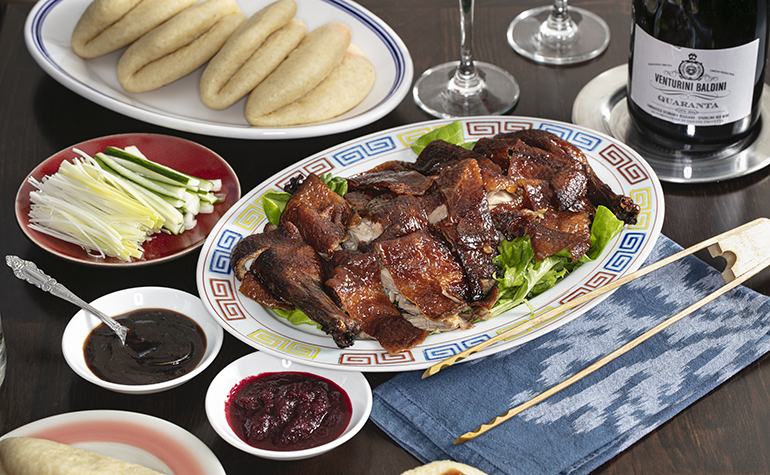 It is, indeed, a blend of European and Chinese flavors, with Worcestershire sauce, tomato paste, beef stock and chicken stock reductions, and also Shaoxing wine, ginger, garlic, chives and a lot of black pepper.

Ong got his start as a pastry chef, working for Jean-Georges Vongerichten, where he won praise for his subdued and sophisticated approach, avoiding the super-sweet style of Western desserts for items that were more nuanced. He went on to open his own restaurant, P*Ong, and adjacent bakery Batch, both of which closed during the economic turmoil of 2009.

Since then he has been doing consulting across the globe, and also was judge of a Food Network pastry competition, Sugar Dome.

Now with the country in a new crisis, Ong is adapting NiHao to suit the times. The restaurant, which opened in late July, recently opened its dining room and made outdoor seating available, but it’s still offering plenty of takeout and delivery, including a full Peking Duck meal, below. 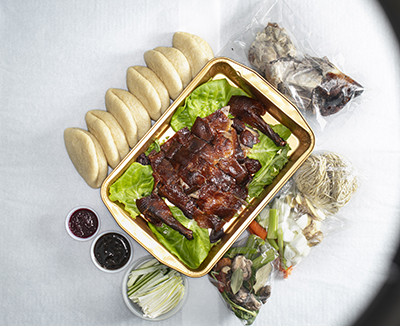 That dish is famous for its crispy skin that’s normally served with crêpes, shredded leeks and cucumbers and hoisin or similar sweet bean sauce.

NiHao offers the meal with sturdier bao buns, plus two sauces — one that’s hoisin based and another with garlic and beets.

For a while, Ong was also including fixings for customers to make their own duck broth noodle soup, with the cooked carcass, mirepoix and spices such as Sichuan peppercorns, star anise, white peppercorns, bay leaves, leeks, daikon and Chinese celery, plus cooked, frozen noodles.

“Some people made beautiful broth … but there were a few that complained [that it was too much work]. So now we just make the stock, but they have to cook their own noodles,” Ong said.

“It’s just very strange that people have never made soup,” he said, noting that soup is integral to Chinese cooking.

“When we trim vegetables or meat, we always have scrap and we always make it into stock,” he said. 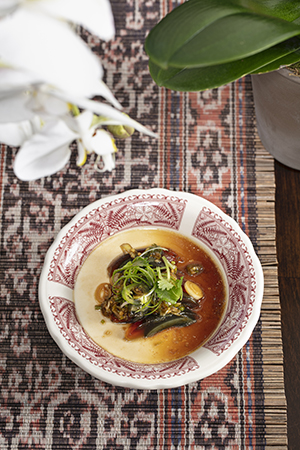 The restaurant also makes its own tofu, left.

So does Lydia Chang, but she prefers it hot and spicy in the ma-la style — “la” is Mandarin for the spiciness of chiles, and “ma” is the tingling, numbing sensation provided by Sichuan peppercorns. Together, along with ground pork, black beans and mushrooms and you have NiHao’s napo tofu, which is served in a ramekin with the tofu on the bottom and mapo sauce on the top to ensure a perfectly balanced dish.

Ong, on the other hand, prefers his soft tofu cold. So NiHao also has a dish of cold tofu with soy, scallion, ginger, Shaoxing wine and a soft “hundred-year” egg.  That’s a preserved egg with a very strong and pronounced aroma (the Thai word for it translates as “horse urine egg”) that is difficult for many people to take.

“Ironically, it sells okay,” Ong said. “It’s not one of the bottom three.”

And Chang said she now prefers the cold tofu to hot mapo tofu.

Another feature at NiHao is that the food doesn’t come with rice.

That, too, reflects modern Chinese dining practices, “and the modern diet,” Chang said.

Before the pandemic, she and Ong went to Shanghai for ten days.

“We barely ate any rice,” Ong said, “although every time we ate rice it was magical, because of the treatment of the rice. Rice became not like a filler, but an ingredient.”

Even with fried rice, the ratio of vegetables and meat compared to rice was much higher than usual.

Not surprisingly, customers pushed back on that, too, so now they keep a rice cooker at the door and provide it to people upon request.