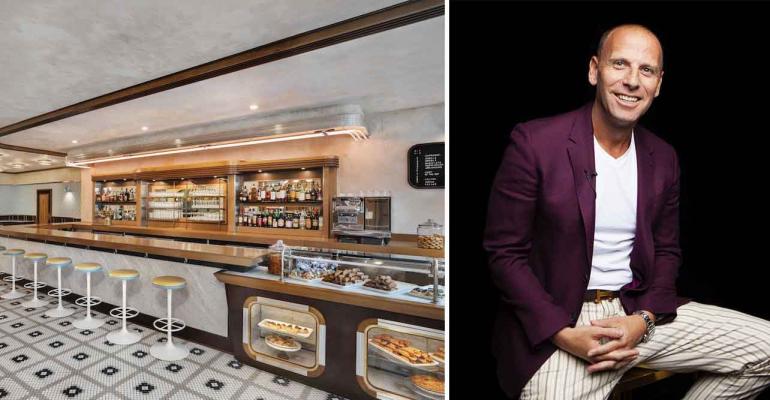 Michael Schulson is changing up his typical outdoor dining program in Philadelphia this summer across his restaurant collective.
People>Chefs

Michael Schulson, like most restaurateurs, had to shift his operations dramatically when dining rooms at his 12 restaurants, mostly in Philadelphia, were ordered closed as the coronavirus pandemic struck.

He experimented with takeout and delivery at some of them. At DK Sushi, normally offering high-end chef-curated omakase dinners, he started offering spicy tuna rolls and California rolls. He did Italian takeout at his red-sauce Italian restaurant, Giuseppe & Sons, where he also sold prosciutto and other salumi by the pound, bread by the loaf and focaccia by the slab.

But takeout isn’t what the Schulson Collective restaurants were made for, nor what his staff is good at.

“We all could walk in a restaurant and go, ‘Okay, the lighting isn’t right, the music’s not right, the food’s not right, this guest isn’t having a good time.’ We can see it. It’s in our DNA. It’s how we operate on a daily basis,” he said. “For us to be figuring out how to do takeout. … Our restaurants are beautifully designed, have great hospitality and service, they feel fun, the music is great, the lighting is great and the food is great. Five of those six things, you can’t put in a box.”

So as soon as he could, on June 12, he started outdoor seating at four of his restaurants in Philadelphia: Sampan, which serves Asian small plates and cocktails; Double Knot, which has customizable salads and rice bowls in the front and a sushi bar and robatayaki in the back; Via Locusta, offering locally sourced Italian fare; and the 20,000-square-foot Independence Beer Garden, which even with social distancing can still seat 300 people.

“It’s kind of back to a sense of normalcy in some ways where you get to eat, you have service and hospitality, and kind of what we all dream of and love to do,” Schulson said.

But he’s doing it in a very different city. Philadelphia summers normally have sports and concerts and conventions, and tourists who want to see the Liberty Bell, walk the old city, eat a cheesesteak (or a roast-pork hoagie with broccoli raab and sharp provolone — another local delicacy) or dine at Philadelphia’s world-class restaurants.

None of that is happening, and even more Philly residents than usual have fled the city for the Jersey Shore, or places where they can avoid crowds and socially distance more easily. 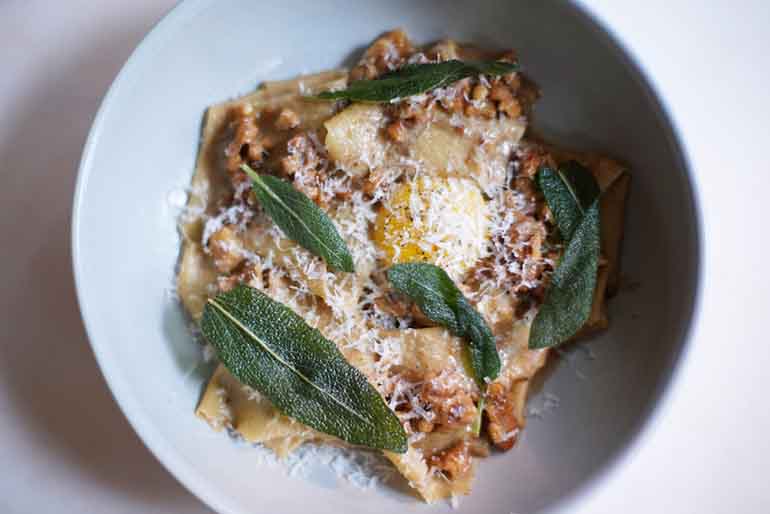 Fazzoletti at Via Locusta in Philadelphia.

So even with perfect weather and three months’ worth of pent-up demand, business was off by 35% compared to last year, “which is pretty good, so we’re happy with that,” Schulson said.

He had anticipated that, as more restaurants opened and competition increased, his restaurants would be down by 50%.

Schulson is a restaurant veteran. A graduate of The Culinary Institute of America in Hyde Park, N.Y., he got his start working his way through Peacock Alley at the Waldorf-Astoria Hotel in New York City and, also in New York, at Park Avenue Café under David Burke.

He then continued his training at Philadelphia landmarks Le Bec-Fin and Susanna Foo before landing executive chef gigs under Stephen Starr at Buddakan in New York and Pod in Philadelphia.

Next he moved to Japan, where he learned conversational Japanese while working at high-end kitchens there, and then, in 2008, opened his first restaurant, Izakaya at the Borgata Hotel Casino & Spa in Atlantic City, where he’s still chef-partner.

He opened Sampan the following year, and that eventually grew into the Schulson collective. 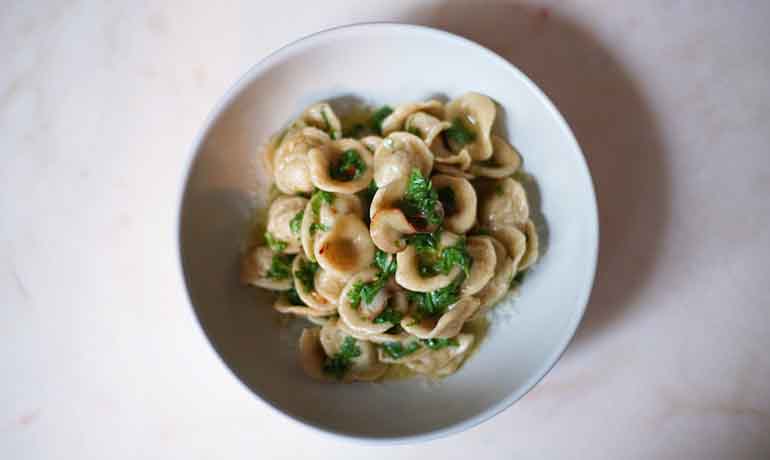 Orecchiette at Via Locusta in Philadelphia.

Now the restaurants that are open have new protocols.

“We try to err on the side of safety,” Schulson said. Everyone on staff has to wear masks. The menus are all disposable. Each table has a QR code that guests can scan and use it to order and pay without touching anything other than their phones.

“Some [customers] love it, and others want more traditional hospitality,” Schulson said.

In mid-June, most of the people venturing out didn’t seem particularly concerned about the global pandemic that had killed more than 100,000 Americans, and policing them has been a challenge.

“When you have a group of four that are six feet apart, and then they have two more people join them and they’re moving tables and chairs, it doesn’t make it a really comfortable situation for everyone,” Schulson said. “And that’s the part that we have to be careful with in terms of being in the hospitality industry and making sure that everyone’s doing their part.”

It’s a balancing act of providing hospitality and keeping everyone both safe and comfortable, he said.

He compares it to managing bachelor and bachelorette parties, when it’s management’s job to say, “Hey, there are other people around you. Could you be considerate?”

“Sometimes we go to those tables and they’re like, ‘F you,’ and sometimes they’re like ‘We’re really sorry, we apologize,’ and they behave,” Schulson said. “This is kind of a similar piece here, where you go to some tables and they look at you like you have four heads and some of the tables are really respectful.”

Although business is as good as can be expected, Schulson said that, with the help of funding through the Paycheck Protection Program, “we’re kind of breaking even and surviving.”

Despite high employment rates, Schulson said it has been hard to convince employees to come back to work since, with the extra $600 per week in unemployment benefits introduced in March and slated to end on July 31, they were making about as much while staying at home.

That, and fewer customers, and social distancing in the kitchen, has meant doing away with high-labor items. Independence Beer Garden used to make its own French fries; those are gone. They’re not using their bread-baking facility, and desserts aren’t as elaborate as they once were.

“As we evolve, we have to figure out what people want during these times. One of the most fascinating things I’ve seen in this whole process is — I think we have some of the most talented directors of operations and directors of restaurants in any restaurant company in the United States, or in the world, and watching everyone struggle to try to figure this out is really painful,” he said. “It’s just really frustrating and hard.”