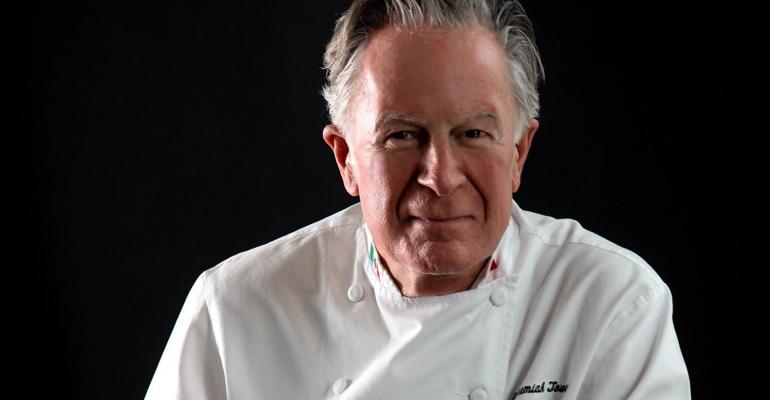 Legendary chef to be inducted into MenuMasters Hall of Fame

In 1976, Jeremiah Tower served a landmark meal at Chez Panisse in Berkeley, Calif., where he was executive chef. The Northern California Regional Dinner veered sharply away from traditional fine dining at the time. Instead of serving classic French dishes with commodities and imported ingredients, Tower highlighted the region he was cooking in. He used Monterey Bay prawns, preserved goose from Sebastopol, Calif., Tomales Bay oysters, Sonoma cheeses, nuts and fruits from the San Francisco farmers market and house-smoked trout from Big Sur’s Garrapata Creek.

That meal was seen by many as a key moment in the annals of modern American cooking, and it’s one of the reasons why Tower is being inducted into the MenuMasters Hall of Fame.

He will be fêted along with other winners at a celebration at the Drake Hotel in Chicago on May 18.

Tower, apart from his renowned collaboration with Alice Waters at Chez Panisse, was associated with such restaurants as Santa Fe Bar & Grill, also in Berkeley, and Stars, an “American Brasserie” he opened in San Francisco in 1984 that for a good chunk of its 15-year run was arguably the city’s hottest restaurant. According to Tower, it generated $10 million in sales in 1990.

Tower in front of a Stars location

Author of several books about food, chefs and restaurant history, Tower was not free of controversy or conflict during his high-profile years, including a public disagreement in court with his business partners at Stars, Doyle and Cathe Moon.

As his business ventures wound down, he all but disappeared from the United States culinary scene for several years, some of which he spent flipping mansions and scuba diving in Merida, Mexico.

Tower’s recent return to American restaurant consciousness was boosted by a short stint as executive chef at Tavern on the Green in New York City, which ended ending in early 2015, as well as the sometimes unflinching documentary, “Jeremiah Tower: The Last Magnificent,” co-produced by the late Anthony Bourdain.

The following are excerpts from a recent interview with Tower:

What have you been up to lately?

It took three years to make the movie and then I went on tour for that with Anthony Bourdain. Since then, I’ve just been doing food events like Pebble Beach Food & Wine and for Chef’s RolI. I worked on NOCHI, the new culinary and hospitality school in New Orleans, for a couple of years and I might go back to that [to teach].

Tower in the kitchen at Pebble Beach Food & Wine

You’ve said that two developments contributed to the famous 1976 Northern California Regional Dinner. One was the realization that you had run out of European regions to showcase, and the other was an epiphany of sorts after seeing a recipe for “Crème de Mais Verte à la Mendocino” — a dish highlighting a California region — in New York chef Charles Ranhofer’s 1893 cookbook, “The Epicurean.”

That [dish] sort of triggered it. I thought of a cream of white corn soup with crayfish butter on top, and that made me think, “Well, he’s got crayfish and we’ve got Monterey Bay prawns, let’s go for California as a region.”

Following that 1976 dinner, did you immediately take up the regional foods banner?

It wasn’t until I was at Santa Fe Bar & Grill [beginning in 1982] that I thought, “That worked so well for California, why don’t I do other American regions?” I did the Florida regional menu. Then we did the Texas menu. I had just read [Southern cooking-oriented] “Cross Creek Cookery” by [Marjorie Kinnan] Rawlins, and that was so inspiring I started reading church groups’ and housewives’ annual and companion [cook]books from Ohio, Texas and California and that was what really got me going. At Santa Fe, those menus were the menus every night [and] we continued, as we did on that 1976 menu, calling out the farms, farmers and origins of the ingredients. What people don’t know is that the Four Seasons [in New York] was already doing that.

When you were running restaurants, where did you look for inspiration for new dishes?

It was always about the ingredients and what was available. I’d get the [product] lists from everybody. We’d call at 10 o’clock at night the fish guy and ask, “What’s coming in?” I’d also call three or four main [suppliers] and say, “What’s exciting? And by the way, I’d like to have these things next week.” It’s like when you walk around the market in Barcelona, or the Santa Monica Farmers Market, the menus start flowing into your head [and] you just want to run to a kitchen and start cooking.

What do you think of the information and product resources available to chefs today through the internet and fast-moving supply chains? Is having so much choice helpful or a hindrance to creativity and execution?

If you’ve got a [long] list of ingredients you could buy that day, what background, what guidance or what teaching is it that that allows you to choose and make menus and come up with dishes so there are not 15 ingredients on one plate? I think that availability [of information and products] has created a lot of confusion. On the other hand, it is brilliant that there is so much stuff available. But how do you find your way through it without making boring and messed up food? Choose a couple of ingredients. Investigate them. Work with them. And then cook and present them in the most simple, elegant way.

A young Tower (right) with the late James Beard (left)

How does a chef or a research-and-development manager balance creativity with the need to meet costs guidelines, or even just have different employees consistently prepare a dish? Is it all about training and workforce management, or do you have to temper creativity around the realities of business and production limitations?

You never give up watching [staff] like a hawk, but it really is all about teamwork. I can walk into a hotel or restaurant these days and tell if there is no owner anywhere or maybe not even a manager. When I say ‘owner,’ it could be the feeling of an owner being present and it is really about [sensing] the original concept the whole team is vaccinated with.

An asparagus dish from Tower at Pebble Beach Food & Wine

We’ve seen many food trends in the United States across the years, from adaptations of French nouvelle cuisine to American regional cooking to authentic international regional bites to “raw” foods and molecular gastronomy, among others. What do you see as the latest wrinkles in America’s culinary development and how do you think all this movement will shake out in the next decade?

I think all of those things are not so important in and of themselves. [What’s important is] how they influence. The influence, for example, of nouvelle cuisine, as it sort of got watered down, was amazing on the United States. [For] molecular cuisine, let’s take foam for instance: By “the master” [Ferran Adrià of El Bulli], it was a brilliant idea to make fresh morel mushroom foam with this enormous amount of flavor, but with no calories and no weight on your stomach. Then, suddenly, every restaurant in the United States has to make foam, and they don’t really know how to do it and they don’t get the point. So, copying a trend without getting the point is the disaster of it, but the victory of it is that it makes you think, and inspires you.

So, what is going on now? I don’t think there are any trends except for … farm-to-table. [And] all that really ever was, was about finding perfect ingredients.

I think that people are realizing that it is not about the whole purchase list in front of you. it is about the things we’ve been talking about: You see some perfect white asparagus sitting in the market and you see some little fava beans and a couple of mushrooms and then you put together a dish, but with the white asparagus as the absolute star. That kind of courage, and that kind of knowledge, I think is being recognized as what makes a great chef and that’s what is going to change.

MenuMasters is an invitation only event for foodservice executives. Follow #MenuMasters on social media to join the excitement, and get more information at www.menumasters.com. On the website you can also submit a form to Request an Invitation. You will receive notification of your invitation status by email within two business days. Only current restaurant and non-commercial operators will be considered for an invitation.