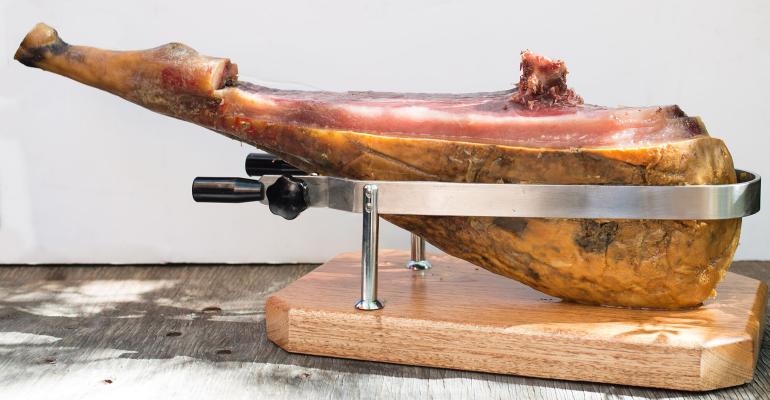 Crafted Concepts goes ‘beyond’ on journey with Ultreia

To prepare for the opening of Ultreia, a Spanish-Portuguese tapas bar in Denver that is Crafted Concepts’ fifth restaurant, Jennifer Jasinski, Jorel Pierce and their team took over the kitchen of another of their restaurants, Bistro Vendôme.

Instead of steak au poivre, bouillabaisse and French onion soup, customers were presented with choices such as chistorra sausage with pickled onion, eggplant with sesame seeds and quince paste, and cedar-smoked mushrooms with black-garlic espuma. Chef and co-founder Jennifer Jasinski offers a plate of small bites. Jorel Pierce has trained all of Crafted Concepts’ chefs and sous chefs.

“We had four chefs that do not know that space and did not know the Ultreia menu doing 150 covers the first night. So it was like opening and getting your ass kicked, proper,” Pierce said with a smile. “And the next day, after like a 16- or 18-hour day, it was like ‘Open up the [reservation] books. Take all the limits off, fill it as full as you can fill it. We want to do 250 covers.’”

“It was awesome,” Jasinski said.

Like many chefs, the top culinary minds at this Denver-based company thrive on the managed chaos of a busy kitchen.

“I love the adrenaline of being a chef. It’s something that always attracted me to just straight-up line cooking,” Jasinski said. “I love being so busy that you ride that line but don’t fall down. I love that high, and then you finish the night and you’re like, ‘Yes! That was awesome and I did not crash.’ It’s an accomplishment every day.”

Jasinski, who grew up in Santa Barbara, Calif., spent a decade as a straight-up line cook, among other things, for restaurant impresario Wolfgang Puck, before moving to Denver in 2000 to be executive chef of Panzano, a Kimpton Restaurants property downtown, where she met her business partner Beth Gruitch.

They opened Rioja in 2004 to wide acclaim, and two years later acquired Bistro Vendôme. Then they opened the muscular meat-centric beer-and-whiskey restaurant Euclid Hall in 2010, followed by Stoic & Genuine, a seafood house with a granita bar (why not?) in 2014, a year after winning the James Beard Foundation Award for best chef in the Southwest.

Pierce joined her in 2006 after begging the sous chef at Rioja for a job. He insisted on staging.

“They hired me, and they haven’t fired me,” said Pierce, who has now trained all of the chefs and sous chefs in the group.

“He should be corporate chef for the company, but we’re not big on titles,” Jasinski said, then added with a laugh: “He should be ‘culinary director.’”

Setas (left), or mushrooms, and pintxo are planned for Ultreia.

Their company is called Crafted Concepts because they like creating restaurants that they think their neighborhood or community is missing, “or also just something really fun that we want to cook or serve at the bar,” Jasinski said.

She said Rioja at the time was the culmination of her dream of opening her own restaurant. Named after the Spanish wine region that she and Gruitch fell in love with, it’s not a Spanish restaurant at all, but more of the “California Cuisine” that she grew up with.

“I don’t use that term here in Colorado because I think it would be very insulting,” she said. “But I think that mentality that I grew up on in the ’80s in California is here in Colorado, which is just, use the stuff around you.”

Bistro Vendôme is a cute neighborhood French restaurant, and Euclid Hall is a chef’s restaurant.

“It’s an industry place for people in the field,” Pierce said. “It’s rowdy. It’s the big brother of the group.”

And it’s been copied.

“Quite a few beer-and-sausage places opened up right around Euclid,” Jasinski said. “Some of them have come in and straight-up told us that they’ve tried to copy us.”

Imitation is the sincerest form of flattery, but it’s not great for the balance sheet, and Jasinski acknowledges that, as more restaurants have opened in Denver’s burgeoning food scene, revenue has dipped a little.

“We’ll out-ride them,” Pierce said, “but it’s a pain in the ass when you say you want to lead some sort of movement, and inevitably to lead a movement you have to have others follow, and as soon as that happens you get a little pissed off about it.”

Stoic & Genuine, a seafood restaurant with the slogan “No ocean, no worries,” was actually originally going to be a taqueria, “and then literally as we were starting to develop the concept, like five Mexican places opened up, and we were like, ‘stop. We’re not going to do that,’ Jasinski said.

“And then my husband, [chef] Max [Mackissock, who recently opened a Mexican restaurant of his own called Señor Bear] and Jorel were really like, we need a seafood oyster bar,” she said. Although Stoic was their fourth restaurant, it still had hiccups when they opened. For one thing, it had accounting software that they hadn’t worked with before.

“We learned as we were opening,” Pierce said.

“Because we’re stupid,” Jasinski said. “It was like committing suicide.”

But they were ready for Ultreia, which was slated to open at the end of November, serving tapas, specializing in gin and pouring sherry and cider on tap. Not only did they practice the food at Bistro Vendôme (don’t worry, they called customers who had reservations on those two nights and told them what to expect), but in late October the sous chefs were ensconced at Euclid Hall and getting trained on the accounting software.

But, of course, you never know what a restaurant really is before it’s open.

“We had the menu locked down when we opened Stoic,” Pierce said. “But then the space told us what we could and should do, and the people walking in the door gave us that direction, too. I would imagine Ultreia will speak to us in the same way.”

Like Stoic, Ultreia is at Denver’s Union Station, where people can catch long-distance trains, as well as one to the airport.

The name derives from the Latin word for “beyond,” and is a salutation used by pilgrims on Spain’s Camino de Santiago trail.

“It’s a word of encouragement to keep you going on your journey,” Jasinski said. “And we just love it because we think this whole time has been our journey — all of our restaurants, that’s our journey. But then it’s also your journey of coming to see us.”

Pierce added: “Just drop your bags, have a bite, and get on the train to the plane.”