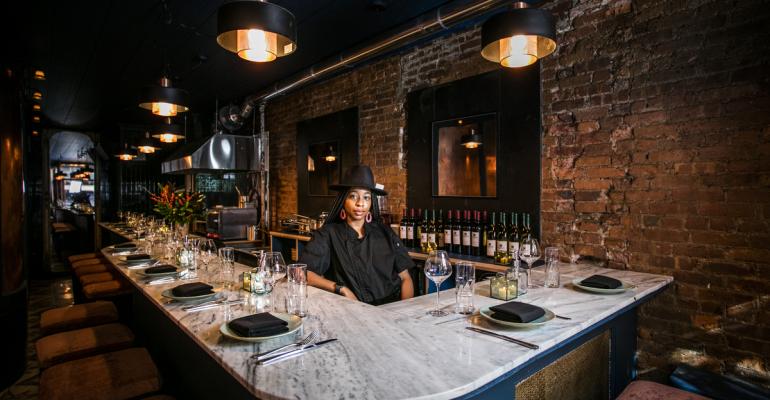 At Cadence in New York City, Shenarri Freeman brings a plant-based mindset to an animal-based cuisine

Vegan soul food is a growing movement. This chef is leading the way

Shenarri Freeman’s vegan soul food restaurant Cadence, which opened last March in Manhattan, lives up to its name’s promised musicality. She designed the restaurant to have a convivial atmosphere, set to a soundtrack of thumping beats, hooks and grooves, which helps turn the menu — featuring dishes like fried lasagna with pine-nut ricotta and Buffalo oyster mushroom sandwiches — into an experience that engages all five senses.

“The music’s always playing. People are always singing along, jamming, doing the food dance, all that good stuff,” Freeman said.

“You know, when you get food and you’re really happy you start dancing,” Freeman said.

As much as Freeman enjoys cooking, something would be missing if her only interaction with her guests were through food. Across the counter, she and her staff not only cook, but take orders, serve the food and wine — all from Black-owned wineries — and chop it up with the “super funny, dramatic, hilarious people” she said Cadence seems to attract.

“People go to restaurants all the time and they just eat. They don’t get to talk to the chef. You see your host, you see your server, that’s about it,” Freeman said. “But here it’s a little different because we’re actually cooking the food in front of people, so they can ask anything that they want to know about.”

Curiosity draws many of Cadence’s guests, and their subsequent delectation often gives way to impromptu cooking lessons. Although Freeman is not the first chef to make vegan soul food, her ability to sculpt powerful flavors out of non-processed, plant-based ingredients, in a cuisine traditionally dependent on animal products, has drawn considerable acclaim.

These were the flavors she grew up with, though, and in some ways her achievement came easily. This is not to diminish the hard work she put in: Freeman spent eight months crafting the menu, experimenting with ingredients and techniques, tossing out one dish idea and adding another amid long phone calls with her mom and the rest of her family. But the flavor profiles now available on the menu at Cadence — which is operated by Ravi DeRossi’s New York City-based Overthrow Hospitality — are the ones Freeman has always pursued in her cooking, whether it be soul food, or a recipe from another cuisine, or an open-ended freestyle.

According to Freeman, who grew up in Richmond, Va., soul food — and Southern food in general — needs to hit three particular flavor profiles: savory, spicy, and sweet.

“Flavor and texture are something that you can’t compromise with soul food. Soul food has to taste good. That’s the bottom line. It just has to taste good,” Freeman said. “And it should be super filling. It should be made with love. You should feel like you’re back home at a cookout or in the middle of the summer. So it has to be made with love. It has to have flavor. And for me, I think the most complicated part was trying to figure out certain textures that would work with vegetables, obviously replacing meats. So once I figured that out and did a lot of the food science behind it, it was a piece of cake. And, obviously, here we’re not like a soul food hot bar, so the plating was something that was really important, as well. We wanted people to eat beautiful food and also feel great about it.”

The successful execution of that vision is evident in Cadence’s record over the past year. Despite opening in the middle of the pandemic, according to Freeman, the restaurant is filled to capacity — 12 seats indoors and another 12 outdoors — almost every night, with the waitlist reaching 500 during its busiest weekend. Freeman and DeRossi plan to add more seating to Cadence in the space next door by this spring.

Although the labor shortage did present initial staffing difficulties, Freeman said that soon after the pandemic unemployment assistance program ended they were able to fill remaining positions, and they have retained more or less the same staff since. When open shifts do arise, Cadence typically offers them to staff members at other Overthrow Hospitality locations.

What makes her especially stand out from other vegan soul food chefs, Freeman explained, is her focus on health.

In addition to her arsenal of plant-based substitutes — palm oil-based butter, almond milk and, most important, aquafaba for eggs — Freeman prefers ingredients that are less processed. Instead of regular sugar, for instance, she uses maple crystals, maple syrup and agave.

Freeman went vegan in 2017, while she was living in Washington, D.C., and trying to balance careers in the foodservice and music industries. Noticing a dramatic improvement in her quality of life following the change in diet, she came to appreciate the health benefits of avoiding animal-based and processed foods.

Now she runs a restaurant that exemplifies that thinking, and strives to lead by example.

“The overall agenda is for people to be more intentional and pay attention to the foods that they’re putting into their bodies, ask questions. I want people in the grocery stores reading labels, figuring out, ‘What are we actually eating? What’s going on with the food scene in America?’ So I want people to have that mindset everywhere that they go,” Freeman said.

Concern for other people’s health has been a constant in Freeman’s life. As an undergraduate at Howard University, she studied pre-physical therapy, and last year she graduated from the Institute of Culinary Education’s program in Health Supportive Culinary Arts.

“Coming from a big family, a very loving family… it’s just the way I was raised.” Freeman said. “Everyone just helps each other: be there for everyone, be there for your cousins, your aunties, your uncles. Just be there and be helpful and put yourself to use in whatever shape, fashion or form. I think that’s something that’s just instilled in me from my family. It’s just kind of molded into my brain. It’s like second nature.”

Cooking soul food comes from that same familial impulse. Most of the dishes on Cadence’s menu are family-inspired. Freeman adapted the palm cakes from her mother’s salmon cakes, for instance, and borrowed the smoked grits from her grandmother (not nicknamed “Queen of Grits” for nothing). But even beyond the recipes, she said soul food requires the context of a big family gathering.

“I don’t necessarily cook vegan soul food all the time. I definitely do cook it quite often, but probably not as much as people would think or assume. Because for me sometimes it’s like a special occasion type of thing,” Freeman said. “I’m not just gonna be in a house whipping out cornbreads every night of the week. If I am, I’m inviting friends over. It’s almost like a love language when I cook soul food, because one: you can’t make small portions of soul food. That’s not a thing. So if you’re going to make it, there should be other people at the table with you, and I live alone, so when I make soul food, and I really throw down in my home kitchen, I’m having people over.”

Living in New York City, hundreds of miles from home, it’s a way Freeman keeps her family with her and creates family anew.

“We’re essentially bringing customers into our home, our kitchen, and we’re cooking for them. So that’s a labor of love, which is something that’s implemented into soul food overall,” Freeman said. “And I think when people come in, they feel it.”