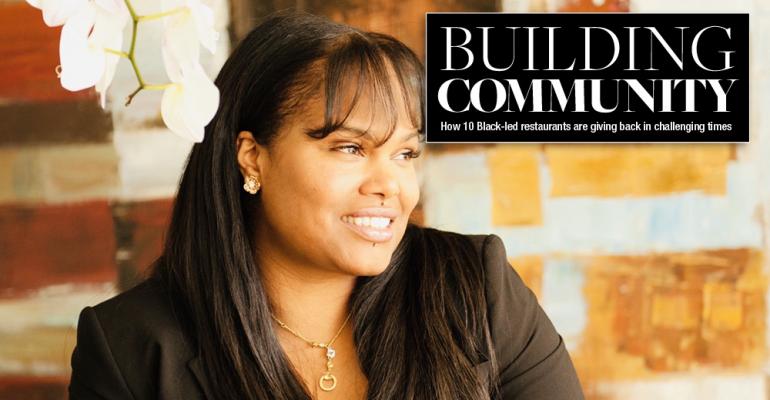 Tamearra Dyson, owner of Souley Vegan in Oakland, Calif., explains why she wants to be a mentor to young girls.
People

With homemade sauces, cheeses and proteins, this Oakland, Calif. restaurant is looking to expand delivery reach using a ghost kitchen

Soul food is traditionally known for down-home comfort food dishes, including pork, fried chicken or catfish. Veganism is often portrayed as a lifestyle for the wealthy elite.

But restaurateur Tamearra Dyson saw an opportunity to bring the two together in Oakland, Calif., with the launch of Souley Vegan.

Related: Atwater’s Best BBQ and Soul Food in St. Petersburg, Fla., serves as an outlet for the community to feed those in need

Souley Vegan says what it is right in the name: Vegan soul food.

With one in five residents living under the poverty line within the city limits, Oakland was certainly a far cry from the popular media image of hipster Bay Area veganism in 2009, when Dyson opened her brick-and-mortar restaurant featuring homemade vegan proteins in familiar Louisiana Creole dishes and seasonings.

Dyson was a single mother working in the healthcare field and studying to be a nurse when she found her passion for flavor and cooking for others. A vegan herself since 17, she started by cooking at a local farmers market on the weekends in 2006.

Within a few years, she decided to take the leap, leave her steady job and open Souley Vegan. The concept has been such a hit, now Dyson Is preparing to expand the delivery footprint of Souley Vegan by using a ghost kitchen to reach new markets.

There were hardships Dyson faced along the way. She was evicted, suffered depression and her mother became ill — all while Dyson was raising young children.

But Dyson made it a mission to educate people in the Black community on why eating healthier is better. Over 11 years, her customer base has evolved from being up to 95% white to 60% Black.

Though increasingly gentrified, she said West Oakland was a food desert just two years ago. Dyson was determined to change that view. She knew veganism required teaching and a lot of patience, and it was her openness that brought the community back for seconds and thirds, she said.

“A lot of the vegan places, especially at that time, where people [were] a little bit snooty, you know, when you walk in there. It's kind of like [an] I'm-better-than-you type attitude. And when I came on the scene, I offered something that was friendly and familiar.” 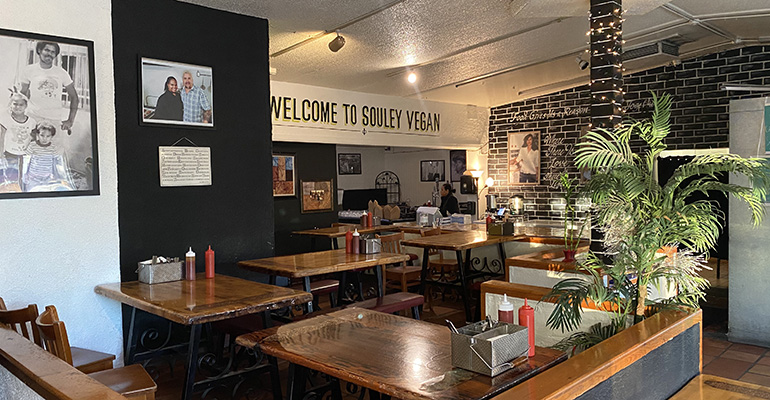 At Souley Vegan, entrées range from $11-$14 and two sides can be added for an additional $5.50, which Dyson said makes the food accessible. And familiar favorites like mac n’ cheese, collard greens, roasted zucchini étouffee, New Orleans okra gumbo and Jazzn’ Jambalaya make the menu familiar for people who are afraid of the unknown.

All of the vegan proteins, cheeses and sauces are made in house. Dyson wanted her business to be an example of the healthy lifestyle she was preaching, free from the toxins she feels are in processed foods and on fast food menus.

“We have people that eat with us, four to five times a week, some people twice a day. It's almost like I feel partially responsible for your health,” she said. “I have to know exactly what I'm feeding you and I have to believe in it.”

When customers repeatedly brought up seitan as a menu item, for example, Dyson did some research and crafted her own version.

“It would be very easy for me, especially coming from a low capital perspective, to source these other vegan meats and, you know, put it in the oven or fry it and put it on your plate and charge you $20,” said Dyson, “But that's not what I believe in.”

She actually sources from a local farm, founded by a Black woman in Oakland named Kelly Carlisle. Acta Non Verba Farms is operated mainly by women of color and serves as an educational place for children, giving them a safe place to spend time, as well as an understanding of nutrition.

As a community pillar and supporter of Black women, Dyson said she was there for her customers and strangers during the protests against the police killing of George Floyd, even as she worried about the safety of her own son.

“We've established ourselves in the community as kind of like a safe place. When people come in, it's more than just buying food, they want to talk and have dialogue on what's going on,” she said. “People are hurt. We’re feeding them physically but also helping them emotionally. Whatever I can contribute is powerful.”

Dyson said she continues to educate herself and be there for her community — both in person and through her bustling online following (she has over 30,000 followers on Instagram).