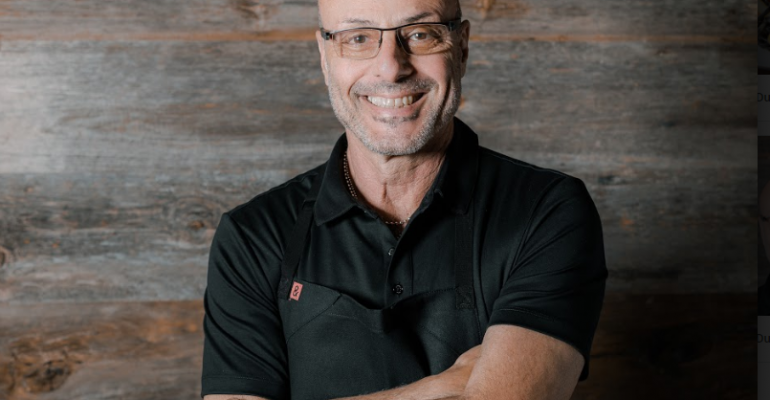 Alfred Portale, who for 34 years was executive chef of Gotham Bar and Grill in New York City, is opening his own restaurant on Friday, his representatives said.

The new restaurant, Portale, will be located seven blocks from the chef’s former restaurant and will serve contemporary, seasonal Italian food reflecting its chef-owner’s own heritage. It will be more casual than Gotham Bar and Grill, without white tablecloths and with an open kitchen that includes a grain mill for making bread, polenta and pasta.

Related: Lettuce Entertain You, The Alinea Group partner to bring back Ambria

The two-story, 7,000 square-foot restaurant was designed by New York City-based INC Architecture & Design, who used design elements including lime white-washed reclaimed timber and bleached white oak with black lacquer, calacatta marble, burled walnut and brass. Portale himself curated the art collection which features imagery of Italy and New York. The ground floor seats 100 people in the dining room and 14 at the bar, while the second floor has a private dining room for up to 40 seated guests or 60 guests reception-style.

Portale will be joined in the kitchen by co-chefs de cuisine Jacinto Guadarrama and Adam Longworth, who both had worked for Portale at Gotham.

David Schneider, most recently of the Altamarea Group based in New York City, which operates culinary landmarks including Marea, Ai Fiori and Morini, is the restaurant’s director of operations.

Steven Washuta, the restaurant’s wine director, most recently was sommelier at The Pool, one of two restaurants that replaced The Four Seasons, and before that he was wine director at Lidia Bastianich’s Italian flagship Felidia. His list is focused on the wines of northern Italy and the southern Italian island of Sicily.

His inaugural menu includes cicchetti — a sort of northern Italian version of tapas — such as meatball sliders with mozzarella and pesto, crostini with salt cod and ruby shrimp and selections of fried seafood, salumi and cheese. Appetizers include burrata with roasted beets, poached fruit and Sicilian pistachios; big eye tuna crudo with truffle pine nut pesto and sweet breads with roasted parsnip purée. Pasta options include garganelli with duck Bolognese, and spaghetti with seafood, nduja and Calabrian chile. Entrées include branzino with delicata squash, red Swiss chard and sundried tomatoes, and roast pork with Nardello peppers.

Portale will be open seven days a week, initially just for dinner, although lunch and brunch will be added later.

Alfred Portale, who won multiple awards for Gotham Bar and Grill, which under his guidance remained one of the most respected restaurants in New York City, left in July, reportedly over disagreements with the other owners over a new direction for the restaurant. Management has said that the separation was amicable.

Since his departure, that restaurant’s kitchen has been overseen by Victoria Blamey.