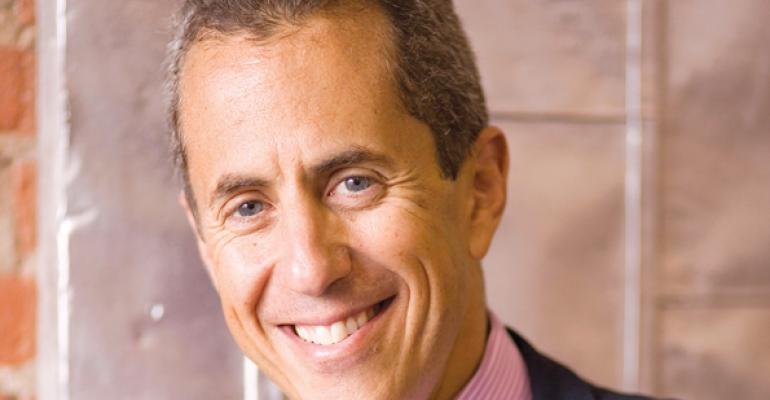 There is little doubt that Danny Meyer, the c.e.o. of Union Square Hospitality Group, is among the most respected restaurateurs in the land. He was in Miami Beach recently to attend a tribute dinner in his honor, but he took time to sit down with Jennifer Baum of Bullfrog & Baum to discuss his business as part of the festival's trade talk series. Meyer's company operates some of New York City's greatest restaurants, including Union Square Cafe, Gramercy Tavern, Shake Shack, Maialino, Blue Smoke and much more. Joining Meyer and Baum for the trade conversation were:

Baum: Randy, you've worked the longest with Danny, 14 years. What was the first thing you noticed when you started working with him?

Garutti: I never wanted to work in New York City, but when I met with Danny for the first time I was so impressed with how sincere and caring he and his people truly were about the business. It made me want to work in the city.

Quagliata: The first thing I noticed when I began to work at Union Square Cafe was how genuine and friendly everyone in the company was, and I mean that from the corporate office on down. It made me want to emulate what I saw.

Baum: Michael, when you joined Gramercy Tavern it was an established restaurant. How difficult is it to walk into an environment like that?

Anthony: Before I even started, Danny made sure I met with everyone in the organization before I got into the kitchen. But it was Nick, who I knew before I arrived, who made it possible for me to learn the ins and outs of Gramercy.

Anderer: When I came to Gramercy I cooked with Tom Colicchio. But when he left I slowly put my mark on the place with my food, which is not like it was when Tom was cooking there. But we've managed to keep a familiarity about the place that people like.

Baum: What's important to know about Danny and his first restaurants is that they changed the face of high-end dining in this country. He relaxed the level of service that was customary at high-end restaurants, but maintained a comfortable elegance.

Baum: Michael and Carmen, you both entered established restaurants. How did you make them your own?

Anthony: My arrival at Gramercy was about the evolution of the restaurant. There was nothing broken about Gramercy when I arrived. It was up to me to bring energy and help it evolve.

Why sibling rivalry is good

Baum: How did you go about that?

Anthony: I worked two months in the kitchen before I made a change to the menu. There's always a percentage of your customers who will embrace change and a percentage that won't. Customers were not happy when I took a signature item—fillet of beef—off the menu. I got emails from many customers saying, 'How can you take my menu item off?' For those people, we still grilled the fillet of beef for them, but we also pressed ahead with new dishes and now customers have become connected to those dishes.

Quagliata: Danny was aware of what would happen when we changed the menu at Union Square Cafe. We didn't change the menu for months after I arrived. But we introduced new items as specials, and many eventually caught on.

Baum: What have you learned from Danny about managing a restaurant?

Garutti: Danny told me once that no matter what decisions I make, it won't change Union Square Cafe. It was his way of giving me a sense of ownership and the freedom to run the restaurant without fear.

Anthony: At each restaurant in the company there is a relationship between the chef and the general manager. It's a marriage that connects the kitchen to the front of the house.

Meyer: If you look at each of our restaurants, you'll find an executive chef who is also a celebrity chef. But they understand they’re responsible for making smart business decisions, which involves putting our employees first and our customers second. My biggest job it to assemble great people and let them do what they do best.

Anderer: An important factor in the company is that we are all very competitive, and not just with other restaurants but within the organization. It's a healthy competition.

Meyer: Sibling rivalry is good if you use it in a constructive way. Some years back we created a barista Olympics where baristas from each of our restaurants compete against each other making coffee drinks. It created a competition among our people, but it also united us as a company. And the best part of it all is that all of our restaurants now serve better coffee because of the competition.

Restaurant Hospitality editor Mike Sanson reported live from the South Beach Wine & Food Festival in Miami Beach, Fla., Feb. 20-23. The event, now in its 13th year,attracted more than 60,000 attendees, 150 celebrated chefs and 250 wineries and spirits producers. A component of the festival is trade panels designed specifically for restaurant operators. Sanson's reports from South Beach focus on those talks and interviews with top chefs attending the event.