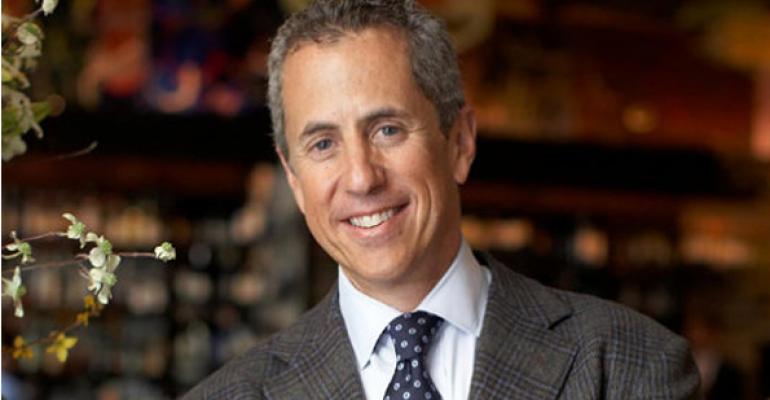 Catching up with Danny Meyer in South Beach

Danny Meyer is the c.e.o. of Union Square Hospitality Group, which operates numerous restaurants, including Union Square Café, Gramercy Tavern, Blue Smoke, Maialino and 27 Shake Shack burger joints. He's revered for his focus on hospitality, which he wrote about in his New York Times bestselling book Setting the Table.

Bullfrog & Baum’s Jennifer Baum sat down with Meyer at the South Beach Wine & Food Festival for a 30-minute conversation.

Your original goal was not to be a restaurateur.

I trained to be a lawyer with the end goal of becoming a politician. But I realized that I had no interest in being a lawyer. I had dinner with my aunt and uncle and they urged me to follow my heart and said that the only thing I talk about with passion is restaurants. So here I am.

But you had no training in the restaurant business when you opened Union Square Cafe.

No. But we took over a space that had a vegetarian restaurant there for 40 years, and now Union Square has been there for 27 years. The place has a good track record. I got lucky picking a good spot.

How long did it take before you opened your second restaurant?

Union Square was 10 years old when Tom Colicchio and I opened Gramercy Tavern. Back then the thinking was that you only open one fine-dining restaurant or you dilute the first restaurant by opening a second. Now there are restaurant groups all over the country which recognize that the restaurant business is just that, a business.

The New York Times predicted Gramercy would be a four-star restaurant even before it opened.

Yeah, and it put a bull’s eye on us. We attracted so much criticism. We were being judged on a story we had nothing to do with. We eventually overcame all the criticism and bad reviews.

You've done that with a philosophy of enlightened criticism.

Yes. We believe that you don't put your investors first or your customers. You put the focus on your employees and if they are well taken care of they will take care of you.   Staff members who are held accountable will do extraordinary things for customers and that eventually pleases investors.

What do you look for when you hire people?

I look for six things: nice, kind people; smart people with curious intelligence; people with a service mentality and a desire to help others; empathetic people who care about others; self awareness; and people with the integrity to do the right thing. Basically, we hire people who make great decisions on their feet because great hospitality is all about making the right decisions based on who comes through the door.

What is your greatest gift?

I'm really good at thinking up ideas. Early on, I wasn't so good at communicating those ideas to others. You need to be good at both.

People. Food, restaurant decor and all that other stuff are inanimate objects. It's people who make you successful.