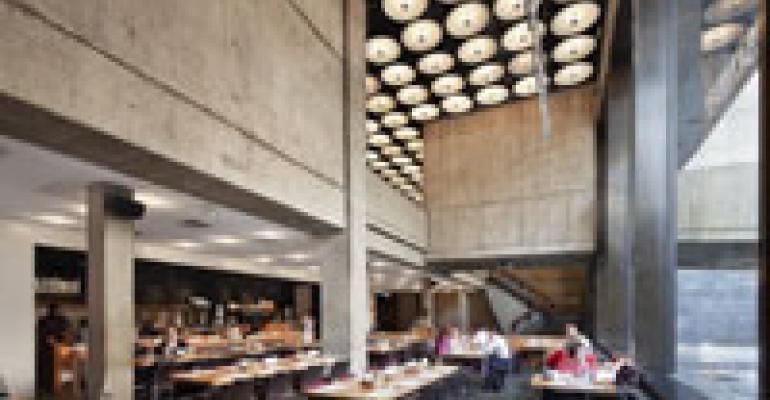 “All furniture and fixtures can easily be removed for museum events.” That’s the key line in legendary designer David Rockwell’s description of his firm’s work for Untitled, the new Danny Meyer/Union Square Hospitality Group restaurant inside New York City’s Whitney Museum of American Art. How did guys of this caliber get involved with a de facto pop-up restaurant?

We know why the Whitney wanted Meyer to run its new restaurant and café. Every restaurant Meyer gets involved with is a hit. He has the golden touch in fine dining (21 Beard awards for Meyer, his restaurants and his chefs so far) and his more casual concepts—Shake Shack and BBQ joint Blue Smoke—are expanding like crazy. Meyer’s Union Square Hospitality Group’s initial foray into the museum segment, The Modern at New York City’s Museum of Modern Art, has been a huge culinary and business success.

And we know why they wanted Rockwell, whose portfolio of trend-setting restaurant designs is like no other.

But why did Rockwell and Meyer want to tackle a Whitney project that equates to a perpetual pop-up? These here-today-gone-tomorrow restaurants typically attract culinary rebels too adventurous for traditional bricks-and-mortar operations or well-known chefs who are between permanent jobs or perhaps burnt out on having a permanent job at all. The key for anyone who enters the pop-up restaurant business is knowing that, sooner or later, it’s going to end.

This one won’t. Untitled opened in March, and Meyer admits it has turned out to be a handful. “It’s an improbable restaurant, for one thing,” he tells web newsletter Eater National. “It’s the only restaurant I ever hope to do that you have to pack up each night. It’s a daily pop-up.”

Untitled is an operational challenge for Meyer, chef Chris Bradley (who left a prize post as executive sous chef at USHG’s flagship Gramercy Park Tavern to take this job) and the rest of the restaurant’s crew. But Rockwell and his design team had the bigger problem to solve: How do you create a restaurant that can be torn down and removed for evening special events, then reassembled in time for breakfast service the next day? The entire dining room had to be packable and portable, capable of being rolled into storage when the Whitney holds one of it frequent events in this space.

Here’s the designer’s official description of the project:

“Rockwell Group joined forces once again with famed restaurateur, Danny Meyer, to design a new restaurant and café at The Whitney Museum of American Art. To complement the mid-century-modern architecture of the Marcel Breuer building, the cellar-level restaurant offers an uptown take on the traditional diner with streamlined furniture and features. Delineated by a large white lacquer frame, the bar area is backed by a chalkboard detailing daily specials and featuring a wood cake display shelves. Rockwell Group also designed simple white oak tables and room dividers, seating with red felt upholstery, and custom metal lamps to create a comfortable and industrial-chic environment. Felt-backed white oak benches line three sides of the restaurant with long communal tables filling the interior. All furniture and fixtures can easily be removed for museum events.”

You can see how Rockwell pulled it off by checking out the gallery at http://www.rockwellgroup.com/projects/entry/untitled1. It’s worth a look, if only because it shows how a single space can serve a dual purpose, with one of those purposes being a busy restaurant that operates at a high culinary level. Who said it couldn’t be done?