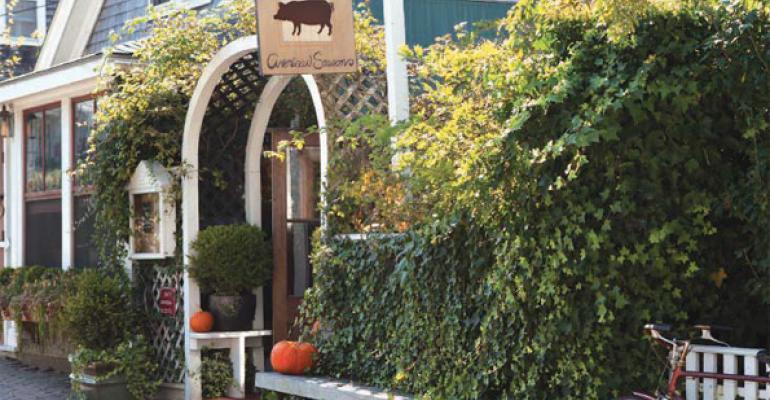 <p>From cobblestone streets to the mandated gray shingles on every structure, including American Seasons, Nantucket is the definition of quaint.</p>
People>Chefs

Mike LaScola has come to love Nantucket, and all the charm and challenges that come with it. &bull; See more Chef Interviews

Mike LaScola can tell you all about the challenges and quirks of living—and running a restaurant—on an island like Nantucket. The chef/owner of American Seasons probably wouldn’t bring it up, but I had to ask after being so impressed with the depth and quality of restaurants in the historic town I thought was known more for its whaling history and famous visitors.

Just getting to and from the island 30 miles south of Cape Cod in Massachusetts can be difficult. The ferry isn’t cheap, but it’s less expensive than flying. It takes close to an hour, while flights are quicker, but more harrowing for those not excited about a tiny prop jet seating eight. New England weather—frequent fog and brutal winters—makes transportation dicey and even impossible at times, and relegates Nantucket to a seasonal destination, mostly for the rich and often famous.

So why would LaScola and his wife, Orla Murphy-LaScola, the restaurant’s sommelier, spend their entire careers there, running not one, but now two businesses that come with more staffing and sourcing challenges than a restaurant almost anywhere else?

“When you’re out walking a trail and see the natural beauty, you realize why you’re here,” he says simply, adding it’s a wonderful place to raise a family (they have a 4-year-old daughter). The island is home to approximately 10,000 residents, but swells to more than 50,000 people during summer.

LaScola started working at American Seasons two days after graduating from high school in 1992. He went on to study at CIA Hyde Park, but came back to the restaurant every summer and became sous chef after graduating. He worked his way up to executive chef, fell in love with a busser who worked her way up to manager, and the two got married and later bought the place. The LaScolas now call Nantucket home, American Seasons is one of the region’s top restaurants and they just opened a second, The Proprietors Bar & Table, with chef/co-owner Tom Berry.

RH: How does business fluctuate through the year?

LaScola: We open the first Thursday in April and close the second weekend in December. The middle of June to September is insane, and the really insane part is August. We have three months to do a year’s worth of business.

LaScola: It is a lot different from an average city with a constant flow. In April and May we go from what a normal restaurant would be doing to dealing with 90 Saturday nights in a row. That’s the best way to explain it. There’s no graduation—no working your way up from Monday to the weekend. And it’s like that for three months straight. You have to be open and working seven days a week. There’s a lot to be done before that to get the staff ready and then once you hit July 4 you have to knock it out. Every year is like opening and closing a new restaurant.

RH: How hard is staffing a business that closes for three months, in a community as expensive as Nantucket?

LaScola: The staff is constantly changing—if I get three years out of anyone, that’s great. We shut down for three months and some people don’t like it and don’t come back. The housing is very challenging. If someone quits during the season, it’s almost too late to deal with. I have to be more hands on than ever. If someone goes down, you have to fill in. It’s not like another city where you can just post something and hire someone. Here you have to get them out here and house them.

RH: How many employees do you have?

LaScola: We have around 40 in season. We hire in waves. I’ll work the line on slower nights early on, and by mid-May we’ve got the majority of people ready. After Columbus Day (Oct. 12) we taper down some and they go to other seasonal jobs. I try to hook my kitchen crew up with other jobs as much as possible.

RH: And you even offer some affordable housing, too?

LaScola: Depending on the economy, people rent houses for $10,000 a week to vacationers. We have an apartment above American Seasons and a cottage in back. I can put five upstairs max, and one or two in the cottage. I leave that for the kitchen staff. The wait staff is on their own, but you talk to people you know, work out deals and trades and do whatever you can to help.

Sourcing, managing in the offseason

RH: How difficult is sourcing and stocking products in a place without big retailers and distributors?

LaScola: Everything costs more. Shipping alone gets you and drives plate costs up. Fortunately there are a lot of great producers here and a lot of farms doing some really cool things, but we’re not 100 percent sustainable. We still have to order stuff off island and pay those shipping costs. Then if it’s a bad day, the boat and planes may not be running, and you’re not getting something.

RH: You buy some locally raised pigs, but even that gets complicated…

LaScola: I buy all my eggs and some produce through Far Away Farms here, and they raise pigs, too—these amazing Berkshire-Tamworth pigs. They get fed lots of compost from restaurants and a local brewery. By the time they’re slaughtered, they’re delicious. The problem with that, I can’t serve them slaughtered by these guys because they’re not USDA. So I have to put them on a truck, then a boat and take them to Vermont to be slaughtered and processed and then bring them all the way back. All said and done, the pigs cost about four times as much. We only do a few a year, and use them for Hogtoberfest (a special weeklong event celebrating pork).

RH: Can you ask competitors for help when you need something?

LaScola: That’s the beauty of it. If anybody calls me for anything, and I have it, or vice versa, it’s not a problem. Everyone helps everyone out. One time someone didn’t get chairs, so I loaned him some because we were closed that day. Everyone is competition, but the bottom line is the better the restaurants here, the better everyone will do and make this more of a destination. We all go through the same stuff.

RH: What do you do when the restaurant is closed?

LaScola: It’s mostly getting organized, research and relaxing. We wind everything down after closing. I sit down with the sous chef and talk about what we want to do next year. Then as a family we go to Ireland (where Orla is from) and always do a California trip to Napa and then drive down the coast. It’s March before you know it, and I’m here with Orla getting ready. We’re painting chairs, redoing floors, painting the kitchen or whatever. A winter in Nantucket can make a restaurant look really old.

RH: Is it strange reopening the same restaurant every year?

LaScola: I like to go into every year with something new or different to spark my cooks who return, and honestly, for me, too. We change seasonally and run up to four different specials a night just to keep us going. I guess I get bored easy. The charcuterie board can have up to 25 different things on it, because during any down times, we’re always making sausage or smoking something. It keeps us busy and interested. Sometimes it’s new equipment I bring in. This past year, I was really excited to get a local potter to do all new plates for us. It changed how the food looked.

RH: How often do you leave the island?

LaScola: I had to go to a wedding (in November), but before that, the last time was March. Things get so busy, you don’t even realize you’re on an island. Then you leave and it’s like, “Oh wow.”