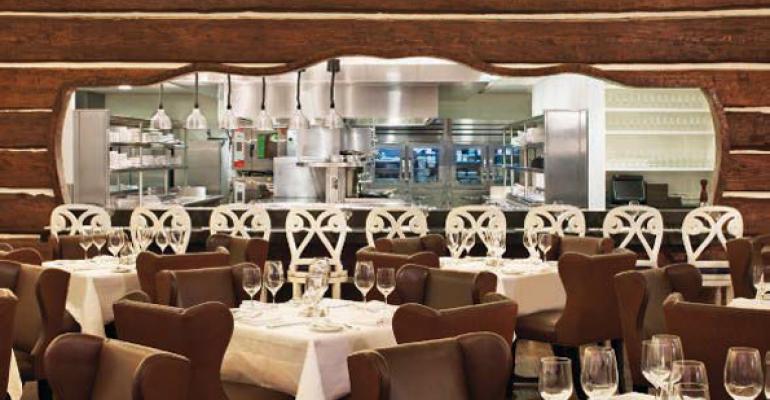 <p>Diners can watch Elena, the regular cast of superstar chefs and other surprise visitors in action from the main dining room of Chefs Club.</p>
People>Chefs

After working 25 years with greats Ducasse and Bocuse, Didier Elena now relishes the chance to work with some of this country&rsquo;s rising talent at the Chefs Club in Aspen. &bull; See more Chef Interviews

When Didier Elena recently chatted with his mentor and former boss, Alain Ducasse, he downplayed how much fun he was having at his new gig. As executive chef of the innovative Chefs Club in Aspen, Elena gets to work with some of this country’s top talent on a rotating basis. Every year, four new chefs join the club to help create the menu at the 78-seat restaurant in Colorado and then occasionally visit throughout the year to helm the kitchen.

After spending almost 25 years working with and learning from masters like Ducasse and Paul Bocuse, you’d think Elena would be happy to become a mentor to these up-and-coming American chefs. But Elena doesn’t see it that way. He’s relishing the chance to work with and learn from the likes of Jason Franey (Canlis, Seattle), Bryant Ng (The Spice Table, Los Angeles), Viet Pham (formerly of Forage, Salt Lake City, UT) and Missy Robbins (formerly of A Voce, New York), the current crew working at the club. Or from people like Jonathon Sawyer (The Greenhouse Tavern and Noodlecat, Cleveland), one of the previous four, who Elena got to know when he took the job in March, just before the annual Food & Wine Classic in June when the latest class took over.

“Without this, it would be impossible to meet people like that,” says the Monaco-born chef. “To find out a guy (Sawyer) in the U.S. is doing his own vinegar? He was fantastic and I was impressed by his vision and his care of the profession. In one of our recent discussions, Ducasse asked me how I was doing, and I said meeting people like that makes this fantastic. I didn’t want to lie, but wow, this has been amazing.”

Elena oversees the kitchen and develops about half the menu, working with the four Best New Chefs as named by Food & Wine to come up with the rest. The magazine is a partner in the concept that will add a second location this spring in New York City. We recently chatted with Elena about his job, the state of culinary talent here in the U.S. and how a chance meeting in a barbershop led to a resume that includes 15 Michelin stars.

RH: You were in college and planning for a career in medicine in 1988 when you first met Ducasse at a barbershop in Monaco. That led you to leave school, start at Louis XV and switch to a culinary school?

Elena: Yes, I think I was looking for something else to do and he was so passionate about food. I didn’t really know much about restaurants, but we had coffee and he asked me to start with him. It was at the beginning of the Ducasse empire. Every couple days, I was like, ‘Wow.’ I learned so much, moved from one location to the next and it was always new concepts, new ideas and really so much fun. In 2000, I ended up in New York and opened Alain Ducasse at the Essex House.

RH: Eight Michelin stars from kitchens you ran, 15 total for kitchens you’ve worked in, a four-star review from the New York Times at that first restaurant in the U.S., Alain Ducasse at the Essex House, and we could go on. What are you most proud of, or do any of these honors stand out more than the others?

Elena: It’s really hard to say. It’s everything. The one I remember the most was the four stars from the New York Times in 2001, because it was such a weird time. If you remember, it was right in the middle of the drama there, a few months after 9/11 when we got four stars. I didn’t know if I should be happy or sad. I was in New York, without really speaking English, and to reach four stars was incredible. It was such a strange feeling. I got what I had dreamed of, but I didn’t know how to react. The stars and recognition are always great, but it’s a new start every time. It’s always ‘What can I do tomorrow to get better?’

RH: It sounds as if New York has become a special place to you.

Elena: I feel like a New Yorker on the inside. I don’t know why. I arrived here in 2000, then the tragedy right after, and I’ve really felt a part of it since. It’s hard to explain. I’ve had some successes in my life that happened here that light me up: getting married and having two children. The city has given me something and I want to give back to it. I don’t get that feeling anywhere else. I love coming from the south of France and Monaco—it’s beautiful, right on the sea and just amazing—but I can’t explain it: New York is my passion.

RH: Do you enjoy the mentoring role you have with these up-and-coming chefs?

Elena: I don’t look at myself that way. For me, meeting those kinds of chefs is a huge achievement and an opportunity to see something else. I’ve seen Paris, New York, Tokyo and worked in high-end restaurants, but meeting different chefs is a learning opportunity. The sharing of knowledge is critical. When you look at a restaurant’s cuisine, you normally have one philosophy and only do your thing. By having the Chefs Club, you have different philosophies and are doing things you’ve never done before. I can do more and more because of it and that’s amazing.

RH: Can the menu be cohesive with so many authors contributing to it?

Elena: The restaurant is a reflection of society. We eat as we are, and we are in a world with everything going so fast. Look at Facebook, Twitter, and all the news coming from everywhere. People want fast, they want choice and they want different visions and flavors without thinking. We’ve got all that in one location.

RH: You’ve worked with some of this country’s best chefs. How would you rate the talent level here?

Elena: It’s incredible. The quality of product is going up and up every year. And then there are so many different personalities and philosophies out there. It makes for one of the most interesting food scenes in the world. You have so many great and talented chefs in the U.S., it really is impressive.

RH: You have a unique perspective working with so many great chefs at the restaurant and Aspen Food & Wine Classic. Do you have any insight into the next big food trends?

Elena: That’s the hardest question. If someone knows what the next trend is they’d open that restaurant right now. I’m seeing a few things people are concerned with now. Meats and proteins—maybe we eat too much. It has been 80 percent meats and 20 percent vegetables and now it’s starting to reverse. Even in supermarkets the thickness of meats is decreasing. Another is foraging has become so big. And people are more concerned about their diet and what they eat. It’s not really to lose weight, but to feel better. If I eat this, it will give me energy, and people want to understand why that is good for you and this one isn’t.