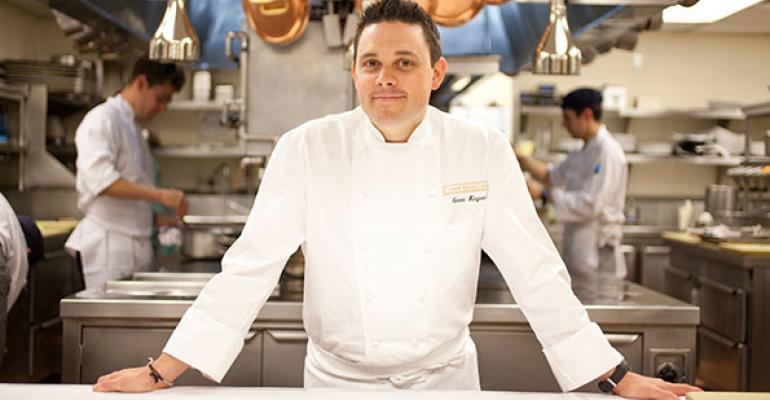 <p>Gavin Kaysen in his old stamping grounds: the kitchen at Caf&eacute; Boulud. &quot;I used to say it has Daniel&rsquo;s ghost inside of it because I always felt somebody or something was watching over us,&quot; he says.</p>
People>Chefs

Gavin Kaysen will carry the torch back home

Kaysen grew from a cook to a chef under the watchful eye of Daniel Boulud. Now he&rsquo;s bringing that knowledge to his native Minneapolis. &bull; See more Chef Interviews

Opening a new restaurant is more than just cooking and serving food. It’s a business, and a critical part of an independent restaurant’s success is the brand it hopes to build.

For one reason or another, Daniel Boulud protégée Gavin Kaysen wasn’t happy with the direction he was heading with his first solo restaurant idea, Merchant, which was set to debut in his hometown of Minneapolis next month. Kaysen released a video saying he and his team noticed too many other restaurants with the same name. So he called his advisors and mentors to get feedback on changing the name to Spoon and Stable.

One thing it will affect is the story on the back page of the menu. The downtown spot was initially described as a mercantile, a natural meeting place for the community. Kaysen told Restaurant Hospitality in August that he would use a mailbox as the host stand.

Perhaps he still will. After all, every restaurant serves a big role in its community, and Kaysen seems to understand that now more than ever.

In the depths of the kitchen at Michelin-starred Café Boulud in Manhattan, Daniel Boulud has mentored a number of chefs who have subsequently branched out throughout the country to oversee flourishing kitchens. One of those apprentices, Gavin Kaysen, created a particularly strong relationship with Boulud while he served as Café Boulud’s executive chef for 10 years.

Before teaming with Boulud, Kaysen was on a mission to gain as much culinary experience as possible. He has cooked at L’Auberge de Lavaux in Lausanne, Switzerland, and L’Escargot in London under chef Marco Pierre White. He gained national attention while serving as executive chef of El Bizcocho in San Diego, and in 2006 he was named a Rising Star by Restaurant Hospitality. More accolades followed: In 2007, he was named one of Food & Wine's Best New Chefs and a year later received a James Beard Foundation Award for Rising Star Chef of the Year.

In 2007, Kaysen represented the U.S. at the Bocuse d’Or in Lyon, France. He has stayed involved with the competition, helping launch the Bocuse d’Or U.S.A. Foundation and coaching subsequent U.S. teams.

Now, after years of discussing it with his mentor Boulud, Kaysen has decided it’s time to move back home and pursue his dream. In November, he’ll open Merchant, which he calls a contemporary American restaurant in his hometown of Minneapolis.

There are so many lessons I took from him, but the ones I’m using the most now are his sense of hospitality and sense of spontaneity. I enjoy a lot of structure and I like things how they should be. Daniel is the same way, but at the same time he can be extremely spontaneous. He’ll often bring a fresh fish he just picked up at the market to the dining room table and ask to cook it for the diners.

RH: What did you like most about working at Café Boulud?
Kaysen: Café is history in the making, in my opinion. I used to say it has Daniel’s ghost inside of it because I always felt somebody or something was watching over us. It was an incredibly tightly run operation and yet Daniel always allowed me to express myself. It was a school—there are chefs all over the country who came from Café Boulud and it’s really to Daniel’s credit because he allows us an opportunity to spread our wings.

RH: Café Boulud must be a pressure cooker. How did you handle the stress and the notoriety?
Kaysen: I think you grow as the pressure grows. I never really looked it as pressure on me; I looked at it as an opportunity. I had a great group of people who worked under me and no matter how hard it got, Daniel was there. If I make a phone call to him and say, “Chef, I need your help,” he’s always there for me. I do it now. Was there a lot of pressure? Yeah, every day. No one wakes up and says, “I’m going to overcook chicken today.” You wake up thinking it’s going to be better than yesterday.

RH: Speaking of pressure, how was your experience on Iron Chef?
Kaysen: I did Next Iron Chef and Iron Chef America when I was much younger and I don’t really think I had any idea what I was getting myself into. I didn’t look at it like I was going on TV for the opportunity to heighten my career. Iron Chef was hard and Next Iron Chef was harder, but Chopped All Stars was harder than all of them. There was more on the line because I was fighting for a charity.

Out on his own

RH: What was it that ultimately compelled you to pursue your own restaurant?
Kaysen: Daniel and I had talked about it for a long time and I knew it wasn’t anything that was going to be immediate. But I got to a point where I was ready to do my own thing. Once I was ready to pull that trigger, I had to make sure Café had a good succession plan. It’s important not to just get up and leave; your legacy depends on your succession plan.

RH: How will the restaurant fit into Minneapolis’s dining scene?
Kaysen: I’m learning the scene every day. It has changed so much from when I lived here; it has changed so much in the past five years. Guys like Tim McKee and Alex Roberts have won James Beard awards. Erik Anderson has won Food & Wine’s Best New Chef and I’ve won a Beard award. Andrew Zimmern resides five minutes from where I live and he’s been great at promoting the city. The chef community has wrapped itself around being more in a spotlight. The city is blossoming and developing a culinary attitude. A lot of it comes down to the guests and the diners—they’re willing to try out what we’re willing to cook. It’s great to see that culture created.

RH: Can you provide some early hints at the concept?
Kaysen: We’ll have a 17-seat bar with 16 more seats in a lounge setting. The restaurant itself has about 75 to 80 seats. We took over an old horse stable built in 1906 and discovered and added a lot of character. There’s that beauty of having natural light. There are two private dining rooms and a chef’s table dining room. The table will be one slab of black walnut that has been drying for a whole year. We’ll have hand-blown light fixtures.

RH: How about the menu?
Kaysen: A lot of people are quick to say it’s French and it’s fine dining and high-end because of my background. Is there French technique involved? Yes. But it will be contemporary American. It will draw inspiration from the heartland and the local farming community. We’ll work with local breweries and Minnesota has a lot of great, local coffee roasters.

We want to create fun food that’s delicious, so we’ll have an a la carte section focused on grains and pasta. I’ll have Dorothy’s Dinner, named after my grandmother, which will be served in a family-style setting and change on a whim. Things like tomato salad with peaches, maybe the entrée is leg of lamb with roasted peppers, and a dessert you can take with you and share with your family.