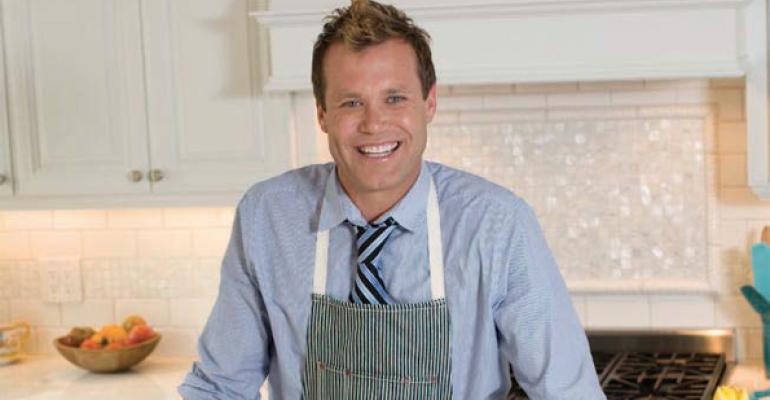 Brian Malarkey likes to play with his food, as is evident on the whimsical menus at Enlightened Hospitality Group’s five concepts. That fun vibe carries over in his recent cookbook, Come Early, Stay Late, which gathers some of the most popular dishes from Searsucker, Herringbone, Burlap, Gingham and Gabardine, the popular Southern California/Arizona spots that he and business partner James Brennan have created. Malarkey recently explained the thinking behind his cooking style and successful formula for restaurants.

RH: Your cookbook, and your restaurants, spotlight quirky twists on classics. How has your cooking style evolved over the years?

Malarkey: It’s been a lifelong evolution, from making fun stuff with my family when I was a kid, to cooking in college and putting stuff on hamburgers, to making this year’s Thanksgiving better than last year’s. If you’re not laughing and having a good time, what is the point of hanging out with friends?

When we launched Searsucker, we wanted menu items that were great conversation pieces, such as the Cowboy Caviar, which is basically Rocky Mountain oysters. A lot of people will say, “I went to this restaurant and they were serving bulls’ balls….I didn’t eat them; I had the crab cake.” But often people in large groups will order it, and everybody will try it.

RH: What do you think your guests find most appealing about the food and drinks served at your concepts?

Malarkey: A lot of restaurants are built entirely on visuals, and the food is secondary. Some are the other way around. Our team’s perspective is that dining involves all the senses. The clink of the glasses, the music, the beat, the laughter: It all enhances the experience. If you come to one of my restaurants, take photos of every dish and overanalyze, you’re missing out. People remember the best nights of their lives from the conversation. Food is a facilitator of a good time.

RH: You’ve called yourself “the Tong Chef” and boasted that many things you prepare require only a pair of tongs. Was that deliberate? Or are you just being modest?

Malarkey: I’m an unapologetic tong chef. So many chefs say you can’t use tongs. What I am not is a tweezer chef; I don’t take a lot of time enhancing a dish while it cools. So many young chefs take 15 minutes plating a dish, and it’s cold by the time someone eats it. For me, it’s all about the flavors and combos and how amazing it is.

RH: From a chef’s perspective, what do you think makes a good business partnership?

Malarkey: For us, it’s just believing and trusting each other, and being willing to go outside our comfort zones from time to time. I work even harder to make my partner proud and deliver. We work tirelessly day in and day out. And we’ve known each other a long time.

Where growth is going

RH: Enlightened Hospitality has been expanding at a rapid pace. Where do you see this growth taking you?

Malarkey: The sky’s the limit. As long as the restaurants are doing well, we’d like to continue to push the envelope. We’re really honing the ones we have. We are circling the wagons. Searsucker has a great identity, and now we are having a lot of fun with Herringbone. The new location in L.A. definitely has the glitz and glam of L.A., and it’s on the Sunset Strip, so that will shine the penny up a little bit.

It’s been phenomenal. It really got me into the public eye and a lot of food and wine festivals where I met a lot of people. It helped me attract investors and put me on the map. I was also cast as one of the chef mentor judges on The Taste, which took it to a whole new level.

Malarkey: I can share several bits of great advice.

“The most expensive piece of real estate in a restaurant is an empty seat.” That’s pretty standard.

RH: Lastly, you cooked for The Real Housewives of Orange County. What are they really like?

Malarkey: I would say they embellish a little because they are fighting for who gets the most camera time. Before the cameras rolled, they were more civil. I was on the “Naked Wasted” episode. My  crew drove home in complete silence and shock.