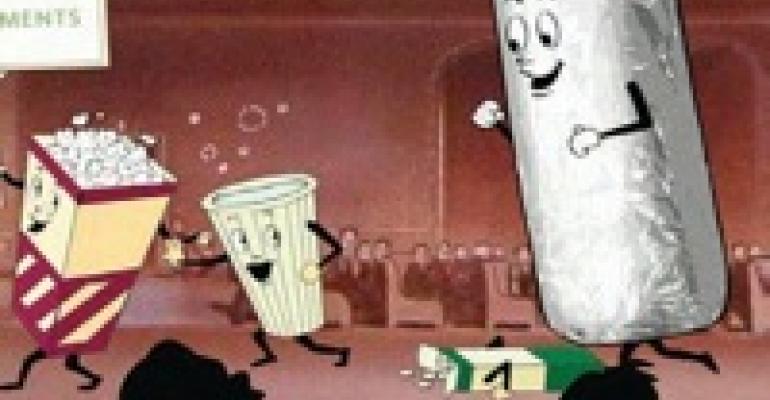 We're not saying it's time to rethink your restaurant's advertising strategy. But you may wish to check out two recent campaigns launched by Chipotle Mexican Grill. Together, they demonstrate that your choice of advertising media may be larger than you think, and your cost of getting your ad message to your target audience may be lower than you could imagine.

Last spring, Chipotle rolled out a pair of move theater ads—the ones that appear with the previews prior to the feature. One 30-second animated spot featured the usual set
of movie theater snack characters winding their way out to the concession stand, singing the familiar "Let's go out to the lobby, to get ourselves a snack" refrain. Before they arrive, they are joined by a giant burrito that, unwittingly, scares the other snack items away. The spot closes with the tagline, "Chipotle, closer than you think," then lists the cross streets of nearby Chipotle locations.

The second commercial has a "manager" claiming that the feature won't start until patrons who have snuck Chipotle burritos into the theater give them up. The crowd turns ugly, pitching burritos at the screen.

"What better way to build our customer base and reinforce our brand than advertising in a dark theater where everyone is faced forward and unable to change the channel?" he asks.

You say you don't have a big ad budget like Chipotle? Fear not. The company's latest campaign is about as lowcost as they come. Creative content was free, and so was its distribution.

Early this fall, Chipotle sponsored a "30 Seconds of Fame" advertising competition. Teams of college students submitted videos to Chipotle; the winning ads went up on video-sharing site YouTube. The students then worked to drive traffic to their spots,

The winner of the creative component was "The Wall," produced by students at Southern Methodist University. It generated 7,763,368 views during the contest, netting the students and their school $20,000. Another $10,000, went to the University of Nebraska at Lincoln. Its team produced the second-best creative ad, which then scored 8,007,634 hits.

"This was Chipotle's first real step to embrace video and user-generated content and, while we were a bit alarmed by a few of the spots, most of the students did a tremendous job," says Adams.

Would this work on a smaller scale for you? Why not?