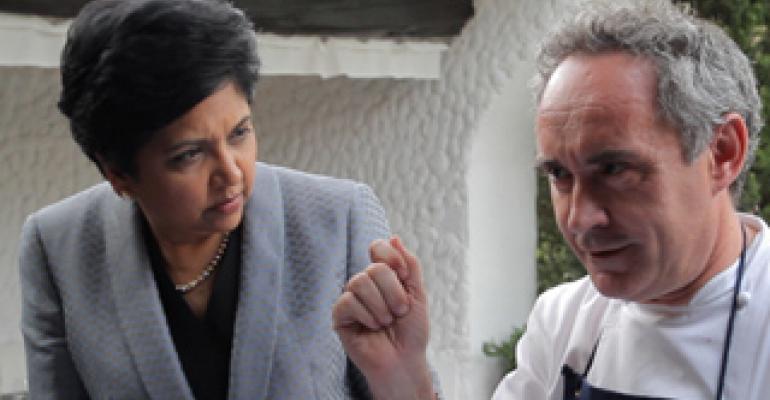 There’s been plenty of speculation about what Spanish chef Ferran Adrià would do after he closes his flagship El Bulli, widely acknowledged as the best restaurant in the world. But nobody guessed he’d be taking his talents to Purchase, NY, world headquarters of soft drink/snack maker PepsiCo. Let’s hope he’s just the first of many full-service chefs to get a lucrative consulting gig with a food manufacturer.

Adrià’s announcement earlier this year that he would shutter the renowned El Bulli came with the implication that he’d be looking for other things to do. First on his list is a major consulting job for U.S.-based food giant PepsiCo and it chairman/c.e.o. Indra Nooyi. She has publicly set a goal that PepsiCo will earn half its U.S. revenue from healthful products—no easy task considering the company’s biggest sellers are caffeinated cola beverages (Pepsi et al) and fat- and salt-laden snacks. That’s why PepsiCo needs a wizard like Adrià, who will use his familiarity with molecular gastronomy and boundless imagination to help make PepsiCo’s vast array of food products more healthful.

So where does a high-end chef like Adrià fit in? Turns out he’s done some work for PepsiCo before. Here’s how the company’s internal blog describes the June 16 workshop where this new effort was hatched:

“Adrià has been linked to PepsiCo for a while through earlier successful partnerships in which PepsiCo received advice on the creation of such products as Lay’s Craft 100% olive oil or cream Alvalle.

“Now the agreement is an even more enriching international cooperation, including all PepsiCo brands worldwide. Adrià, who describes himself as an artist, shared his passion with PepsiCo chairman and c.e.o. Indra Nooyi and her team at the session. ‘While I know they think they have a chef in front, I am expressing myself using the language of an artist in the kitchen,’ he said.

“From this philosophy, the prestigious Chef will create new snack products, more choices for breakfast, and will share samples, food trends and observations from around the world, expanding PepsiCo’s portfolio of healthier products.”

In other words, even though PepsiCo employs an army of R&D food technologists and product developers, the company recognizes it needs some out-of-the-box thinking if it’s going to meets its aggressive healthful products goal.

The food blogosphere has had a lot of fun with the idea that a chef of Adrià’s stature would stoop to working for PepsiCo. But if it pays off, this move will give other food manufacturers the idea that bringing a working restaurant chef on board from time to time can make product development a more productive, and more profitable, process.

“The relationship with PepsiCo is great. But I wonder why the relationship between companies like this and top chefs are not happening more often. Because we can create better foods for the masses. We can help. I know people write on the blogs, oh what's wrong with Ferran to partner with a corporation. But this should be happening more. And if it happens more, we'll be eating better tomorrow. I want to be pragmatic. Local is great. We need fresh vegetables and fruits. But it's a very very good relationship.”

We agree that the possibilities could be great. We can’t wait to see what Adrià comes up with for PepsiCo, and we hope other chefs get to follow his lead in retooling or creating products for food manufacturers.