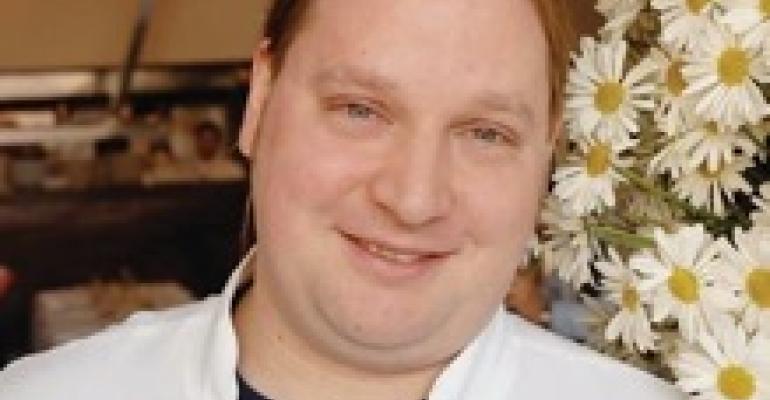 When Food & Wine named Paul Kahan one of America's Best Chefs in 1999, his restaurant Blackbird was already beginning to secure its legendary status in Chicago. The restaurant is so highly regarded, in fact, that when chefs from around the country visit Chicago, eating at Blackbird is often at the top of their list. So, it comes as a bit of a surprise that Kahan, who has never had a chef de cuisine at 10-year-old Blackbird, is finally loosening the reins.

Just months ago, he hired Michael Sheerin, 30, to head his kitchen. A native of Chicago, he worked at Toque and Everest in his hometown, and then moved on to New York City where he cooked at heavyweights Jean Georges, Lutece and Atlas. He comes to Blackbird from WD-50, a wildly experimental restaurant that bears more similarity to Chicago's Moto than Blackbird. Yet, Kahan is a pal of Wylie Dufresne, the mad scientist/chef behind WD-50. Though their cooking styles vary greatly, they are bonded by their obsession for culinary perfection.

But that brings us back to Sheerin, who for three-and-a-half years was Dufresne's sous chef. Blackbird fans who've heard of Dufresne may have some reservations knowing that at WD-50 the two culinary cliff divers defied convention with creations such as fried mayonnaise, ice cream with caviar and smoked mashed potatoes. Can Sheerin, with his molecular gastronomy background, play it a bit straighter at Blackbird, or will his space age cooking techniques evoke the wrath of Kahan and fans?

So far, he's bridging the gap beautifully. Consider, for example, parsnip soup, which he garnishes with puffed rice (which is simply fried in oil and seasoned). Other head-turners include venison with smoked grapes, or bacon paired with caramel. His new menu also includes pike served with a crisply bitter radicchio sauce; and fried shallot broth with lamb and butternut squash panisse. Clearly, Sheerin is far more grounded at Blackbird, but do expect some Wylie influences.

"I was really impressed with the work Mike did at my friend Wylie Dufresne's restaurant," says Kahan. "It was obvious he would be a perfect person to bring Blackbird a fresh new perspective as we entered our 10th year, and his excellent technique brings a new focus to our kitchen."