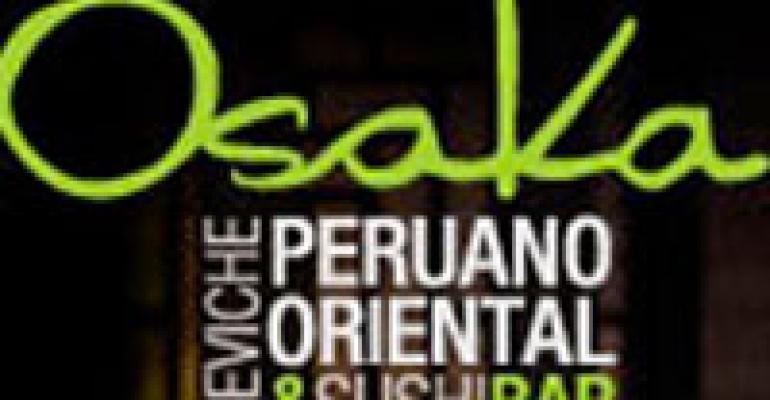 Ready For The Next Nobu?

Peruvian food has been an up-and-coming cuisine for at least a decade, but has yet to catch on big. Maybe giving it a Japanese spin would help. That’s what’s hip South American restaurant brand Osaka is hoping will work in Los Angeles, and that’s how chef Richard Sandoval plans to fill the seats at his four-unit Zengo chainlet this fall. Hey, there’s even a food truck version now.

We already know good things can happen when someone with Japanese culinary sensibilities is turned loose on seafood-centric Peruvian cuisine. Chef Nobu Matsuhisa started his career by leaving Japan to open his own restaurant in Lima, Peru. His place there was a huge hit, although partnership issues caused him to move on. Today, his ultrasuccessful Nobu concept (22 units) is testimony to how well Japanese-influenced cooking and sushi play to non-Japanese palates
Nobu’s cuisine isn’t exactly Peruvian-Japanese. But it’s close. As Nobu’s business partner Myriad Restaurant Group puts it, “The impact of his time in Peru cannot be overstated. Nobu began weaving Peruvian influences into his dishes – the beginnings of his signature style.”

Osaka is anything but a knockoff of Nobu. The parent company already operates units in Lima, Peru; Buenos Aries, Argentina; and Santiago, Chile. The Los Angeles operation is a partnership between L.A restaurateur Adolfo Suaya and the Osaka group.

Suaya lined up designer Kristopher Keith of Spacecraft to design the 7,000-sq.-ft interior. Spacecraft came up with a high-end casual look inspired by the Amazon rainforest. There’s an expansive bar and lounge area that emphasizes Peruvian-style pisco cocktails.

Osaka opened last week, so we’ll find out soon how well Peruvian-Japanese cuisine plays in L.A. as a standalone concept. But this style of food could also be useful in providing a quick pick-me-up for your current menu. That’s what chef Richard Sandoval will be doing at Zengo this October.

Sandoval operates four Zengo restaurants (Denver; Washington, DC; New York City; and Santa Monica). It’s a Latin-Asian concept that will soon feature what Sandoval dubs his Lima-Tokyo menu. It consists of eight small plates that “pay tribute to traditional Peruvian and Japanese ingredients and highlights the affinities between them.”

The lineup includes such items as:

We’ll find out later how this month-long menu experiment worked out. But we already know that this type of food can sustain a small foodservice operation over time. Chef Eric Nakata has been serving Peruvian-Japanese out of his food truck, Lomo Arigato, in Los Angeles since 2009.

We’re not saying that Peruvian-Japanese food is necessarily the next big thing. But keep your eye on the handful of operators who are trying to rescue it from its under-the-radar status. They might not come up with the next Nobu, but they’ve got a shot at being among the first make a significant buck off this intriguing cuisine.