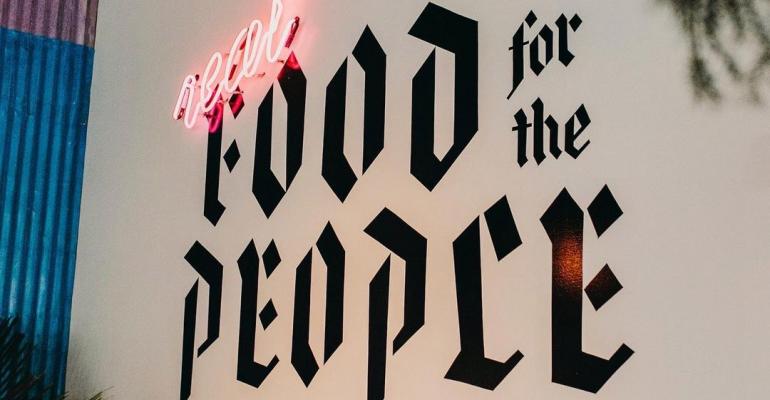 Michael McHenry has long been creating restaurant concepts and then spinning them off from his headquarters in Salt Lake City, Utah. He helped create Costa Vida Fresh Mexican Grill, which now has more than 100 units, and 5-unit Blue Lemon, an early example of the fast-fine category of limited-service restaurants. And most recently he sold Dirty Bird Fried Chxx, a Nashville-inspired concept, to Wags Capital, in late August.

“That's our mission: to create these experiential brands, prove their viability at early scale and then exit to these large, qualified funds,” McHenry said.

He also has a virtual concept born out of the pandemic called Southside Pizza Company, which operates out of Oak.

“We turn it on and off,” McHenry said of Southside. “That’s the beautiful thing about digital brands.”

Created to appeal to a younger demographic than the more upscale customers of Oak, Southside features just five wings, eight pizzas, a salad and a dessert, mostly cross-utilizing what the team already has at Oak. It’s offered via DoorDash, and McHenry and his team make it available when they expect there to be high demand, such as game days.

So Happy Burger was also created as a virtual concept in partnership with local chef and restaurateur Tyler Stokes, who is also a partner in Ginger Street and Sunday’s Best. McHenry said So Happy Burger is likely to be a brick-and-mortar concept in the future, and other concepts are in the pipeline, including what he hinted would be a Mexican concept.

“I can just tell you that everything tastes better in a tortilla for now,” he said.

Although McHenry and his team adjusted quickly to the needs of Utahn consumers as the pandemic struck, they also anticipated a need for the return of experiential dining with Sunday’s Best, which opened in June 2021 with 200 seats and 100 parking stalls.

“That was a big risk for us,” McHenry said. “I can tell you there were nights when I was like, OK, I believe in this, but am I the only one who believes?”

But it opened with a bang, offering pancakes and Champagne to customers who were eager to reconnect.

“We’re excited about it,” he said. “We’re seeing new locations. We’re planning to open in southern Utah, near St. George, and we’re planning to head to northern Utah after that, and then to Boise, Idaho.”

The McHenry Group also operates its own marketing agency, Always Noon, which mostly focuses on its own brands but also consults with other restaurants.

Its philanthropic arm, the Healthy & Full initiative, was launched in early April 2020.

With 140 employees, including Stokes’s restaurant, Provisions, McHenry said he felt an obligation to keep his staff employed as dining rooms were closing. So he sought out companies or individuals who could sponsor meals for healthcare workers.

“It allowed us the opportunity to champion a business or individual within the community, it created stability for our restaurant teams, and it provided chef-made meals for that nurse who’s on a 24-hour shift, and she’s not sitting down to have string cheese and an apple. She can crush a Thai basil chicken stir-fry and a mushroom roll.”

They ended up serving hundreds of meals a day, and had more sponsors than they could handle.

“We’ll turn it on during any time of need, crisis or disaster within the communities that we serve,” he said.