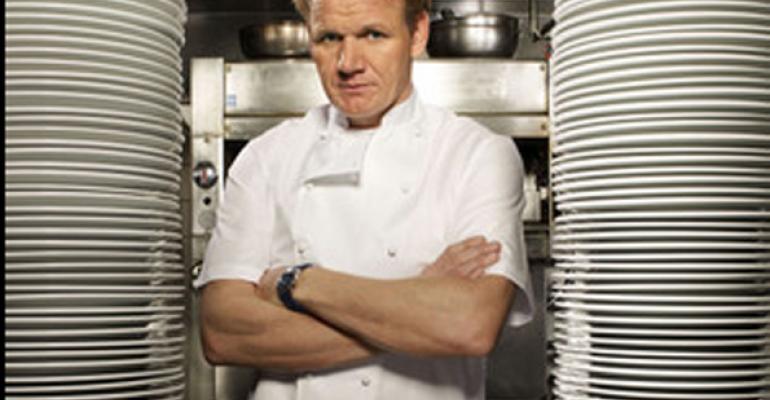 Profanity spouting British chef Gordon Ramsay goes out of his way to be offensive on his Fox television shows Hell’s Kitchen and Kitchen Nightmares. But he intends to show U.S. diners his warm and fuzzy side at his new Los Angeles restaurant, The Fat Cow, which is scheduled to open this summer.

What will the place be like? Well, it sounds like Ramsay may have developed his new casual restaurant by reading a bunch of “Top 10 Trends For 2012” stories and then figuring out how many hot ideas could be woven into The Fat Cow concept. We don’t know that we’ve ever seen so many of-the-moment restaurant industry buzzwords packed into a single restaurant’s description.

On paper, it looks like Ramsay will be hitting all the casual dining hot buttons right on the head. But he may find it challenging to create a Euro-centric rustic neighborhood feel at The Fat Cow, given its location in the middle of busy Los Angeles shopping mall The Grove, where the retailers include everything from an UGG store to Jimmy Choo by Nordstrom. But Ramsay’s up for the challenge. “We’re really excited to bring this concept to life, a place where people can just relax and enjoy a delicious European-inspired meal,” he gushes.

It certainly will be a departure for Ramsay. He’s a monster television star in the U.S. with multiple prime time shows on Fox, including Hell’s Kitchen, now in its ninth season, and the long-running restaurant makeover series Kitchen Nightmares. But his TV popularity hasn’t translated to restaurant success for him in the U.S. the way it has in Great Britain, where he is an even-bigger television fixture.

Ramsay has done all right in New York City, with fine-dining spot Gordon Ramsay at the London and the somewhat more casual Maze holding their own. In Los Angeles, there’s Gordon Ramsay at the London West Hollywood. These places are solid restaurants with generally happy customers doing business in somewhat rarified settings. With The Fat Cow, Ramsay will be downscaling by going into a mall setting, where he’ll be competing for customers against the likes of The Cheesecake Factory and Maggiano’s Little Italy.

Ramsay certainly knows food (his restaurants still have those 11 Michelin stars). And, as his television shows illustrate, he has a keen sense of how to run a restaurant and come up with menus and dishes that customers like. Plus he’s been a successful operator all over the globe, even if most of his success has been in the fine dining realm. If his new Euro-style family friendly neighborhood concept works in laid-back Los Angeles, other operators may wish to exploit the same trends Ramsay is leveraging with this one.