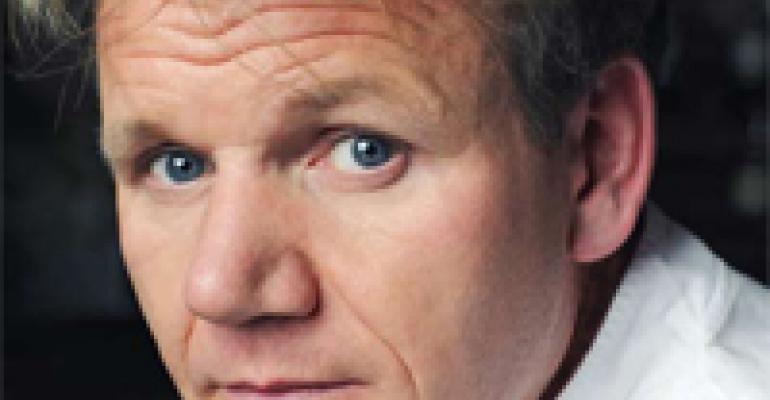 With his feverish pace and feisty personality, chef/entrepreneur Gordon Ramsay is one of a kind. The first Scot to earn a Michelin star, he now has more of those stars than anyone in the world except Joel Robuchon and Alain Ducasse. An outstanding businessman, Ramsay owns the new Gordon Ramsay at the London West Hollywood plus a collection of well-received restaurants around the globe. Add to that a growing list of pubs, Tante Marie School of Cookery and his newest book, Fast Food, an ode to good food made quickly. And, if you've seen Hell's Kitchen or Kitchen Nightmares on TV, you've watched him play hardball with chef wannabes and restaurant owners. The (yes, really) charming Ramsay recently took a time-out with RH contributor Libby Platus before the opening of London West Hollywood.

RH: Did the Hell's Kitchen shooting schedule influence your decision to open in Los Angeles?

Ramsay: I fell in love with LA when I came here for the 1994 World Cup Finals. I was brought to the Bel Age Hotel three years ago and was asked, “would you be interested in opening here?” The potential was extraordinary. It's been 2½ years in the making. And here we are.

RH: The transformation of the old Bel Age is astonishing. Who's the designer?

Ramsay: Yes, this is chic. It was Debbie Collins. She has designed three of my restaurants. The last time I came to Bel Age, I was shooting for Fox. I said, “you have to get me out of this ghastly shit hole!”

RH: Have you designed with any particular Hollywood needs in mind?

Ramsay: All my customers are special…they'll get treated like my mother…and like the Queen. I'm not into ass-kissing celebrities. Everyone's dollar is welcome. No, I don't have secret hangouts, passageways, red carpets and private rooms.

RH: There seems to be a certain sameness in high-end big city restaurants. They have similar items on their menus: beet salad, seared ahi tuna, molten chocolate cake. But not your places.

Ramsay: We're not generic here. We're unique and individual. And more importantly, I'm European. There's never been a European chef in this country positioned to have this kind of opening excitement. I've been doing my homework seriously for the last 12 months. The team has been here for the last six months.

RH: How is this restaurant different from your others?

Ramsay: What is different? The ingredients: we don't do veal stocks…that is all gone. We're working with scented broths, using sauces with vinaigrettes, a natural, light way of cooking. Sort of California style without the need for heart bypass after five courses.

RH: Do you have any of your signature dishes — like the ravioli of lobster, langoustine and salmon chutney and vinaigrette — at the West Hollywood restaurant?

Ramsay: We adapt. Instead of a ravioli, we're having a tortellini of fresh Dublin Bay prawns.

RH: If you were asked to cater an Oscar or Emmy after-party, would you do it?

Ramsay: We had inquiries for the Emmys and for the Oscars next February. Yeah! I'd be very happy to assist them. That's like meeting the Queen… which I did last Thursday.

RH: You have said you wanted your company's sales to hit $100 million, which they appear to have done. What's next?

Ramsay: In terms of ambition, I'm 41. I'm an adrenaline junkie! I was in a Black Hawk helicopter last week in Atlanta with the Marines. I was hanging out of the helicopter shooting wild hawk.

RH: Why did you buy the cooking school?

Ramsay: I was fed up with the NVQ (National Vocational Qualifications) system that was training donkeys. Four days a week was theory and one day was practical. I want young chefs going into this industry at 16, to be talented by 19, into the deep by 21 and then under immense pressure at 25. They've got 25 years to make it. If you haven't made it by 40 years of age, give up! It's a young man's game.

RH: With all that's going on — books, TV, restaurants, the cooking school — do you ever calm down?

Ramsay: Calm down? I'm nice and calmed down talking to you. I'm diving for sea urchins next week on the west coast of Ireland. I had a rest on the plane today. . . I had an amazing rest. It was 11 hours. It was dreadful. I was ready to jump off the plane. I was going mad. Eleven hours is a long time with nothing to do.

RH: Does a contestant on Hell's Kitchen really become one of your chefs?

Ramsay: Yeah, they're going to be dropped in the shit, basically. Do you think I'm going to let a chef who's won on Hell's Kitchen become the head of my restaurant? They'll be given a table of say, five, and they'll look after that for a long time. It will take five years to climb the ladder. Cooking on TV is very different than cooking in the real world.

RH: Who casts your television shows?

RH: Do they purposely choose….

Ramsay: Dumb wits? I can't say. Unfortunately, for a cooking job you don't need a qualification! It's true. You can find a crappy restaurant anywhere. It's an easy job to get into when you are not qualified, whether it's on Santa Monica Boulevard or the Champs-Élysées in Paris. You can't practice medicine or law without qualifications.

RH: What do you look for in a chef?

Ramsay: I just want hunger! (It's good) if you are hungry and you are determined, and you can take being reprimanded. Not enough people get told off. It's very healthy! I'm from the old school, and I can't let that go.