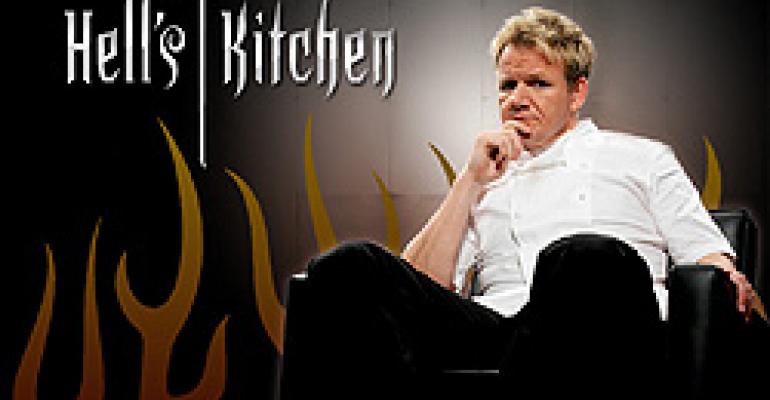 THE REALITY: ONLY THE HOST WINS ON HELL'S KITCHEN.

Ramsay's fellow chefs and operators have to wonder: Why does a guy with multiple Michelin stars bother with Hell's Kitchen? It can't be fun. Ramsay spends much of his time enraged at the contestants' lack of skills, and the show's lengthy production schedule-it's roughly a month-long shoot, which requires him to spend that much time away from home in Los Angeles-is enough to wear anyone out. With nine restaurants, multiple British TV series (he pulls in $2.5 million per year from these shows alone) and a string of cookbooks all going at once, how much fame and fortune does one guy need?

Apparently, a lot more than he has now. Ramsay has previously gone international with restaurants in Tokyo and Dubai. He wants to conquer the U.S. next. This fall he'll open Gordon Ramsay at the London, which will be located inside the rechristened London NYC Hotel (it used to be the Rihga Royal) in Manhattan. It's a 45-seat restaurant that will take its cues from Restaurant Gordon Ramsay in London, the three-Michelin-star flagship of the Ramsay portfolio. Nearby will be an 80-seater, The London Bar, where the food will be more casual, much like what Ramsay serves at Maze in London.

The publicity blitz doesn't end there. Ramsay will be releasing his autobiography, Humble Pie, this October. It's the first book the prolific chef has put out since, gee, just last May.

We're not sure when Ramsay has the time to plan and execute new ventures or to write these books, let alone ride herd over the many kitchens that make up his far-flung empire. But you can't knock his determination. He aims to shoot right to the top of the Manhattan restaurant scene.

"It's the burning ambition of every top chef in the world to succeed in New York," Ramsay says. "To be there amongst the best in the world is so exciting. I thrive on competition and New York has restaurants from all the top chefs in the world, from Thomas Keller to Jean-George Vongerichten."

Thanks to his TV work, Ramsay may already be better known than his soon-to-be-rivals, even though they've cooked in the U.S. for two decades and he never has. That alone should ensure a steady stream of patrons to Ramsay's new places, as well as to the ones he plans to open in Miami and elsewhere. If there's a better way to break into the U.S. restaurant market, we've yet to hear it.

Speaking of breaking into the restaurant scene, the winner of this year's show, Hell's Kitchen Two, was Heather West, a 26-year-old sous chef from Port Jefferson, NY. Her victory earned her quite a prize: the executive chef position of T-Bones Chophouse & Lounge in the Red Rock Casino Resort Spa in Las Vegas. She was also given a financial interest in the place, percentage undisclosed.

West was thrilled with the win. "I get to live my dream," she said. The finale included a scene in which Red Rock Casino's president introduced Heather to her new staff at T-bones.

Pretty cool, at least if it had turned out that way. The Red Rock people subsequently backed off their commitment, saying that Heather would instead be put in a position commensurate with her skill level. Later, they decided to move her out of T-Bones and into to a job described as "Senior Chef" at Terra Rossa, the resort's Italian restaurant. There's already an executive chef in place at Terra Rossa.

So sous chef Heather wins a knockdown drag-out culinary battle on national TV and winds up with a job as, well, more or less a sous chef. Hmmm.

Late last month, Red Rock officials told the Las Vegas media they were still working out the details of Heather's contract. But they were certainly looking forward to having her on board.

"I think it's very, very positive for the resort," a Red Rock spokesperson said. "It's been an extremely popular show, we've had a lot of exposure, and we've had a lot of response from the public. The phones were ringing right after the show with people asking where they could eat Heather's food."

At least she'll get something out of her appearance beyond the $4,000 other participants get. Regular RH enewsletter readers will recall that Season One winner Michael Wray turned down his grand prize: ownership of the Hell's Kitchen restaurant in Los Angeles -estimated value, $2 million-where the show was shot. Instead, he decided to accept an invitation to go to London to work and learn from Ramsay. Which Wray did, only to turn right around and come back to the U.S. instead. Now he's peddling custom-made knives on a website and hoping to get his own restaurant going in Las Vegas. So far, no financial backers have emerged.

Thus neither Hell's Kitchen winner has much to show for their victory, although a mountain of free publicity has been generated for the ventures of Ramsay and others. If the show doesn't follow through on awarding its prize, it doesn't say much about the integrity of the show's star, its producers or the network on which it appears. Sadly, that's the true reality of this show.

Not that this would stop any of the principals from doing it all over again next season. This year's ratings were strong, so look for Season Three of Hell's Kitchen to air next summer. If you or someone you know wants to be considered for Season Three, send an email to: [email protected] pronto.

How many will want to participate this time around? Our guess: thousands. Love it or hate it, a show like Hell's Kitchen makes full-service restaurants seem like an exciting place to work. Ultimately, it brings new talent into the industry. We just hope the winner gets something worthwhile out of it the next time around.