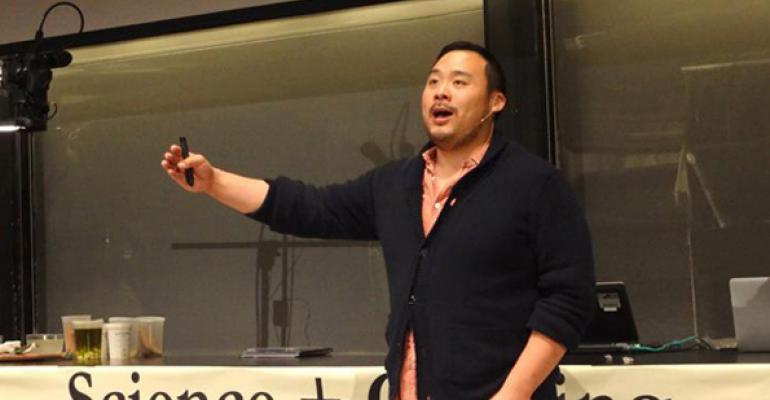 <p> Chef David Chang teaches cooking, and the science behind it, at Harvard.</p>
People

This one’s such a sweet deal for restaurant industry workers it almost seems too good to be true. You can earn a certificate from Harvard by completing its heralded science and cooking course, now offered by the school’s Massively Open Online Course (MOOC) venture HarvardX. Taught by some of the world’s most honored chefs, it’s free. No prerequisites, either.

The Harvard College of General Education has offered “Science and Cooking: From Haute Cuisine to the Science of Soft Matter” annually since 2010. The course was taught to a small group of enrolled Harvard students at the school’s Cambridge, MA, campus, but had a free-to-the-public component. Each of the 14 guest presenters—a Who’s Who of the culinary world from the U.S. and Spain—would give a public lecture that shared some of the material they had given the Harvard students. Those lectures were then made available via iTunes and YouTube.

This year is different. The lectures will still be available, but now an unlimited number of non-Harvard students can take the actual course via HarvardX. This unit is part of edX, which the school describes as “a non-profit created by Harvard and MIT that brings the best of higher education to students of all ages anywhere in the world via the Internet with free MOOCs.” You can find out more about how this course works and how you can register for it here: https://www.edx.org/student-faq.

Interested students have the choice of simply auditing the cooking course or going for the Certificate of Mastery, which involves watching the videos, doing the homework and passing the exams.

So what would you learn? Here’s how HarvardX describes course SPU27x, Science and Cooking From Haute Cuisine to the Science of Soft Matter:

“During each week of the course, you will watch as chefs reveal the secrets behind some of their most famous culinary creations—often right in their own restaurants. Inspired by such cooking mastery, the Harvard team will then explain, in simple and sophisticated ways, the science behind the recipe.

“Topics will include: soft matter materials, such as emulsions, illustrated by aioli; elasticity, exemplified by the done-ness of a steak; and diffusion, revealed by the phenomenon of spherification, the culinary technique pioneered by Ferran Adrià.

“To help you make the link between cooking and science, an ‘equation of the week’ will capture the core scientific concept being explored. You will also have the opportunity to be an experimental scientist in your very own laboratory—your kitchen. By following along with the engaging recipe of the week, taking measurements, and making observations, you will learn to think both like a cook and a scientist.”

The part-time faculty is loaded with high-profile chefs. Momofuku’s David Chang’s course segment is titled “Fermentation: When Rotten Goes Right.” Spain’s Carme Ruscadella, holder of five Michelin stars, will tackle "Playing with Taste through Browning." Other chef-instructors include Wiley Dufresne, José Andrés and Jordi Roca, the pastry chef at El Celler de Can Roca, currently ranked as the best restaurant in the world.

See the full lineup of chefs and topics. Note that while there are four lecture dates in September, the on-demand online HarvardX course we’re talking about in this article begins in October.

Should you sign up? The online learning revolution is in its infancy, and courses like this one and many others are being offered for free. They probably won’t be free forever, so we say grab this opportunity while you can.