Ordering with augmented reality, reviews of sustainability and the battle for your delivery business

This month we look at technologies that give guests more information about your menu or your restaurant’s commitment to sustainability (or at least the use of plastic straws). And competition for your delivery business continues to increase.

Why ask the server when they can ask Google?

Coming soon to Google Lens is a new augmented reality capability that will allow guests to interact with restaurant menus.

Using their smartphones, Lens will allow guests to point the camera at a restaurant menu to highlight which dishes are popular. They can also tap on the dish listing and see photos and what people are saying about it, or snippets of reviews from Google Maps, the company said.

At the end of the meal, guests can point a camera at the receipt and it will help calculate the tip or split the tab.

Lens will also allow guests to translate menu text into different languages, or even read it out loud. Guests can also use it to tap on a specific word on the menu to ask for its definition.

It was launching first in Google Go, the search app for first-time smartphone users, and the features were expected to be rolled out before the end of May.

Yelp to rate restaurants on use of plastic straws, composting and discounts for reusables

Yelp, the online consumer review site that has a love-hate relationship with restaurants, is adding a new review feature that logs a restaurant’s use of single-use plastics.

Yelp’s Green Practices Initiative, which launched April 23, gives consumers a better understanding of how to assess the sustainability practices at restaurants, the online review site said.

When reviewing a restaurant, Yelpers will be asked if the restaurant uses compostable takeout containers, plastic bags, plastic straws, plastic utensils or offers a discount for bringing your own cup or mug for beverages.

The consumer selects the attributes that apply based on what they see or experience at a restaurant, Yelp spokeswoman Hannah Cheesman said.

“We will then use this data to inform how we display the information back to consumers on the business page, which could include being added to the “factual” list of attributes,” Cheesman said. “We are also considering ways to work with notable partner organizations who are experts in this field to ingest data on restaurant sustainability that can be displayed on Yelp as well.”

Cheesman said information about a restaurant’s single-use plastics practices will not be shown as part of company’s profile until enough data is generated.

“The attributes won’t be visible initially,” she said. “We are starting with an information gathering phase.

But there are countless other small players that, believe it or not, are becoming a thorn on the side of the big guys. One of them is Waitr. 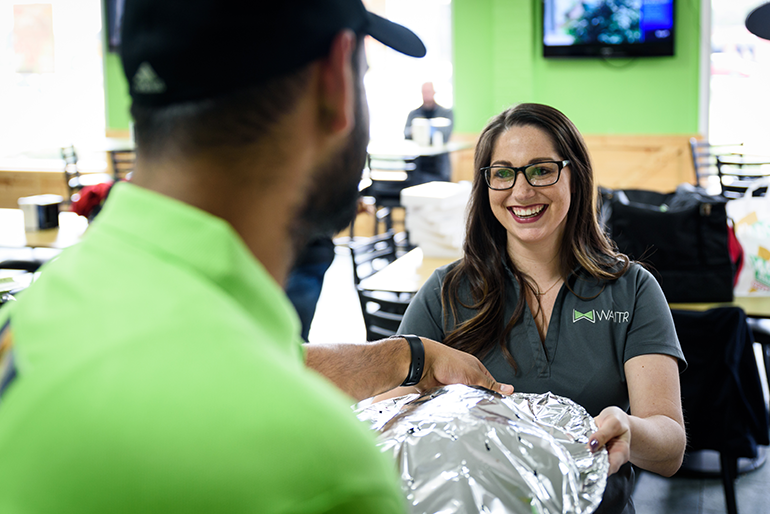 Since Waitr Holdings Inc. went public in late 2018, we’ve learned a lot more about its strategy to dominate in medium and small markets. That reach grew exponentially this quarter thanks to the acquisition of Bite Squad. The purchase was largely responsible for the company reporting 287% growth in revenue to $48 million compared to $12.4 million in the first quarter of 2018.

The delivery brand, whose drivers are W-2 employees, not contractors, partners with chains, as well as independent restaurants in cities with populations ranging between 50,000 to 750,000.  Chain partners include Buffalo Wild Wings, Hooters, Dickey's Barbecue Pit and restaurants under the Landry’s Inc. portfolio. Some of its independent brands include Schatz Crossroads Diner in Minot, N.D., Pacific Counter in St. Petersburg, Fla., Ruffino’s Restaurant in Lafayette and Baton Rogue, La., and Sal & Mookie's in Jackson, Miss.

While Waitr has experimented with non-partner restaurants in small tests, the brand is no longer adding any restaurants to the platform without a partnership agreement. That’s a big distinction as some third-party players often deliver food from restaurants without a restaurant’s consent, especially when they’re testing out new markets.

By comparison, Grubhub has 19.3 million active diners, and logs, on average, 521,000 orders a day, according to its latest quarterly results.

Waitr founder and CEO Chris Meaux said Waitr will continue to grow by strategically dominating smaller markets, instead of striving for national scale.

The company reported a quarterly net loss of $24.7 million, or 38 cents a share, compared to a loss of $3.4 million, or 34 cents per share, in the first quarter of 2018.  The loss was driven by $6.9 million in one-time expenses tied to the Bite Squad purchase.

ChowNow includes more than 11,000 independent restaurants across the U.S. and Canada as clients. The company offers a variety of digital ordering services, as well as the ability to allow guests to order delivery through Facebook and Google.

And, in a sign that the delivery space is getting ever more competitive, ChowNow has launched a consumer-facing website that attempts to reveal the “dirty little secrets” of other delivery apps: OrderBetter.com.

The site explains how most third-party delivery partners ask restaurant operators to pay a commission of up to 40 percent, significantly cutting into restaurant profits.

ChowNow, alternatively, does not charge commission, but it does require a monthly flat fee and, of course, there is the cost of developing an app or ordering website as well as other premium add-ons.

CORRECTION: This story has been updated to clarify ChowNow's focus as an online ordering service provider.