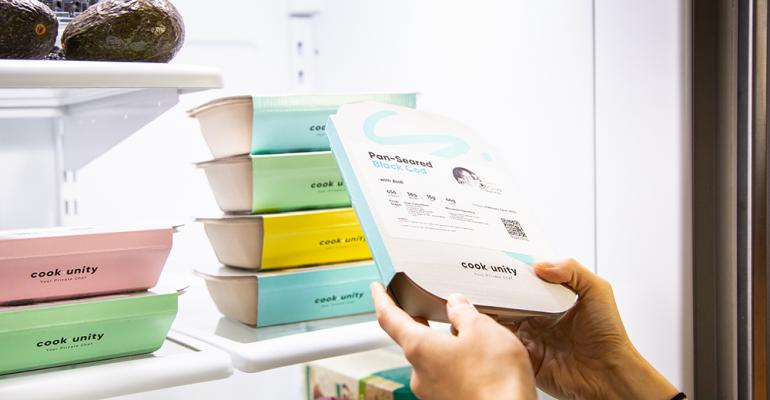 It has been a long year of on-again, off-again restaurant restrictions for New York City restaurant operators, but Marc Forgione has found a way to churn out thousands of meals per week on a steady basis.

Forgione, who operates multiple restaurants in New York and was the winner of Season 3 on Food Network’s “The Next Iron Chef,” is one of a growing number of chefs and restaurant operators who are offering restaurant-quality, heat-and-eat meals by subscription.

Forgione, for example, employs three full-time staff at the CookUnity kitchen, preparing dishes like short ribs with sweet potatoes and Brussels sprouts, and cedar-plank salmon — the latter a dish made famous by his father Larry Forgione of An American Place.

CookUnity, which operates a 40,000-square-foot commercial kitchen in the Williamsburg area of Brooklyn, has seen a six-fold increase in sales in the last year, said Mateo Marietti, founder and CEO. The subscription meal service is expanding from its base in New York to California, Texas and possibly other locations across the country.

The company recently received $15.5 million in financing that it plans to use to expand its business nationwide, starting with an outpost in Los Angeles slated to open next month, followed by a location in Texas later this year. 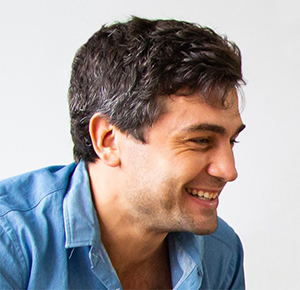 “People are cooking less and less,” said Marietti. “With CookUnity, people don’t have to spend the time grocery shopping, cooking and cleaning up.”

Consumers sign up to receive between four and 12 meals per week shipped refrigerated to their homes, at a cost ranging from about $10.50 to $13.50 per meal. CookUnity will automatically select meals based on consumer preferences, or customers can choose their own meals from among the nearly 300 offered each week. The platform offers a range of options that meet specific dietary restrictions, such as vegan, gluten-free and keto.

Among recent dishes offered include a Seared Steak with Brussels Sprouts from independent chef Chris Ratel, who is a veteran of several New York city kitchens, including Sardi's, Lundi Brothers and Oyster Bar and who now works on his own; a Pulled BBQ Chicken from chef James Grody, who operates his own catering company called Tailored Chef NYC; and Bulgogi Ramen from chef Esther Choi of Mŏkbar.

More than 35% of customers continue subscribing to the service after their first year, Marietti said. 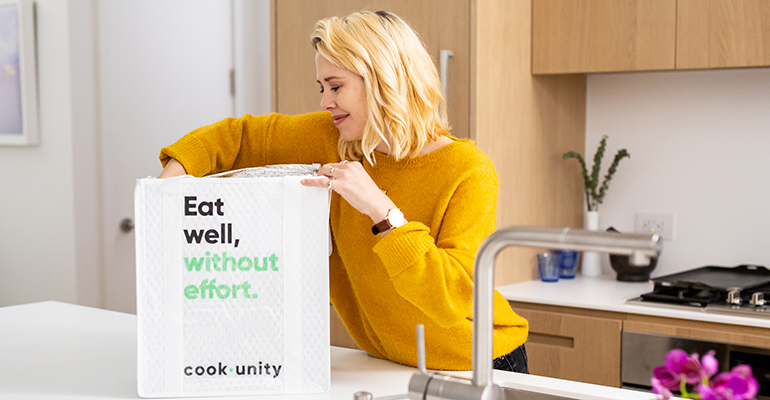 Customers can receive up to 12 meals per delivery.

The current delivery area includes the Northeast and parts of the Midwest and Mid-Atlantic, but plans call for the service to expand nationwide, with kitchens being considered for cities such as Chicago, Atlanta and San Francisco, in addition to the planned locations in Los Angeles and Texas.

Chefs who join CookUnity have the freedom to create whatever dishes they choose to offer, subject to approval by CookUnity based in part on ingredient costs. CookUnity purchases all the ingredients, and provides all of the equipment needed to cook, chill and package the dinners in what it describes as eco-friendly containers.

Chefs are paid on a tiered system, and can receive anywhere from 15-30% of the sales they generate.

Marietti said CookUnity provides a platform for chefs to experiment with new dishes, and to reach new consumers.

“We have a lot of restaurant owners who are using CookUnity to capture eating occasions that they wouldn’t capture in the restaurant,” he said.

A family in suburban New Jersey, for example, probably would not venture to downtown Manhattan on a typical weeknight for dinner, but they might heat up a meal from that restaurant if they had it on hand in the refrigerator.

Marietti said interest in CookUnity among chefs and restaurateurs increased sharply during the early days of the pandemic. The kitchen currently includes more than 30 different chefs and operators, some of whom have teams of cooks preparing their dishes.

Other heat-and-eat meal delivery services on the market include Freshly, Snap Kitchen and Factor 75. CookUnity seeks to differentiate itself with its roster of high-profile chefs and wide variety of meals to choose from. 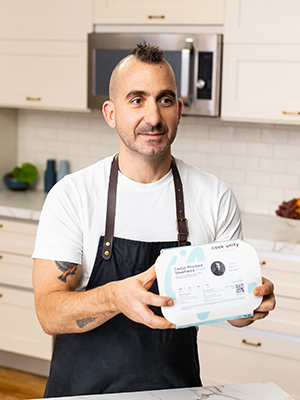 Marc Forgione began working with CookUnity last summer as a result of the pandemic-related restrictions. But the idea of making high-end, restaurant-quality meals more accessible to everyday consumers had long been in the back of his mind.

“If I could, I would charge $10 person to eat at my restaurants, but it’s just not feasible,” said Forgione, whose restaurants include Peasant and Restaurant Marc Forgione, as well as a partnership in Khe-Yo. “With CookUnity, I can reach people who might not be able to afford to eat at some New York City restaurants.”

Forgione said CookUnity has helped him keep more of his staff employed during the shutdown.

“Not only do I get to feed people, but I get to help my workers feed their families,” he said.