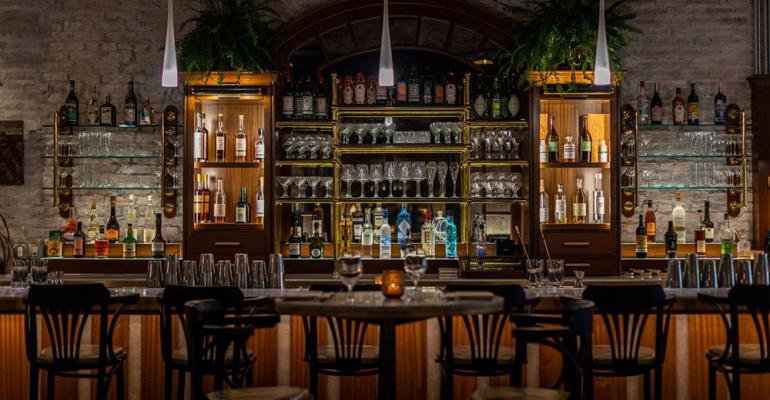 Ann Hsing of the restaurant Pasjoli in Los Angeles argues now is the time to raise menu prices to change the way employees are compensated.
Operations>Staffing

During the pandemic, many restaurants changed the way they paid employees: the lack of dine-in customers resulted in the significant loss of tip income, forcing restaurant operators to find a better way.

But one California restaurant that opened in 2019 with a hospitality-included model — no tipping — now offers valuable advice about rethinking the compensation formula.

Hsing and partner Chef Dave Beran met while working at Alinea in Chicago, where she was director of business operations. Hsing and Beran moved to Los Angeles from Chicago to open the now-closed restaurant Dialogue, followed by the upscale brasserie Pasjoli.

Hsing’s background was not initially in restaurants. She graduated from MIT with an economics degree and eventually earned a master’s degree in business before working on Wall Street. It’s this finance background that helps Hsing see a different side to the restaurant industry and its traditional dependence on tips.

At Pasjoli, the cost of service is built into menu prices.  Pasjoli is an expensive restaurant — Hsing willingly admits it — but that’s in part because the restaurant offers workers healthcare benefits and pays a living wage.

Hsing is a big proponent of service-included restaurants. Here’s how Pasjoli has done it and how others can do the same in light of the COVID pandemic’s impact.

Q: You come from a financial background, how has that impacted your view of both the industry and tipping?

My background is not really in restaurants and I think there's a lot of things that happen in this industry that started a while ago and have just become the norm. If you think about how businesses run, every business front is revenue and income, and then you have expenses related to the restaurant, and as a business, you get to control those expenses. You decide how much rent you're going to pay with your negotiation. You decide the rate you're going to pay your employees, how much they work, and it's kind of like you decide how much you're going to spend on things. And then at the end of the day, that's what gives you your profit in restaurants that's a little different, especially when it comes to tipping.

With tipping, you are basically asking your customer to give you anywhere from 10% to 20% of what your revenue should be. That cost then goes into the true expense of paying your employees so that they can have livable wages, and I just find that to be very backwards because there's no other industry, really, that such a large portion of a person's wage depends on something the company they're working for doesn't control.

So as a company, you can think that you have this one, rock-star employee and in normal settings, that employee would maybe receive a bonus because you really value them. But if you think about a restaurant, even if the restaurant thinks they're a rock star and the guest doesn't, if they're on tip, then they don't really see that monetary benefit.

What that does is it creates a huge disconnect, and a disconnect of wage-level changes to your kitchen staff and your front of house. It’s not like the cook, who's cooking the food, means any less or has participated and contributed any less in the product being put out than the front-of-house employee who is interacting with the guests, and bringing the food to the guests.

So that's the first issue. Historically speaking, back of house gets paid a lot lower than front of house, and I think that creates a huge rift in the culture of the company. That was the first point for Dave and I that made us move towards service included in our prices.

The second is, there's a lot of costs that go into employees. We offer full healthcare benefits here — that's health, dental and vision after just one month of working here. There’s a true cost to that, and it also needs to be represented in the revenue that we're bringing in.

The funny thing is that I think why restaurants and bars might be a little bit scared or a little gun shy to move towards service included is that we really need the consumer to re-anchor what they believe the true cost of food is because we're all so accustomed to seeing, ‘Oh my gosh, [a] $20 hamburger seems really expensive, but maybe $17 doesn't seem so expensive.’ It's that psychological aspect. In reality, it includes everyone cooking, the people doing your dishes, the people coming in the morning to prep for you, the overnight cleaners — they're all part of getting you that burger on your plate. And so, that cost has to be reflected in the price you're charging.

Q: We’ve seen many reports of lower tips during the pandemic, especially as some states have introduced COVID surcharges to bills and others haven’t changed wages amid a lower number of customers dining in. Have you seen issues with other restaurant owners on this?

We formed a restaurant Independent Hospitality Coalition here in Los Angeles that's bringing together, independent restaurants and bars, of which I'm actually the president. And [tipping] is a very big sticking issue, even within my own coalition, because while I do have a few of the other members agreeing that tipping needs to go away, I do see the other side of it. If you're a bartender, you're going to give somebody a beer and then they're just going to give you $1 for doing that.

So, the difficulty [is] doing away with tipping, even though in the long run, it might be better for the employee.

Q: How can you combat consumer and worker expectations?

It's not a problem for us at our restaurants because we make [the fact that it’s a gratuity-included restaurant] very clear from the start.

We want to equalize wages between back and front of house [and] we want to be able to offer these other benefits. The other unintended consequence — maybe not unintended, but we have thought about the reason why this works — is that it actually provides a higher level of service to the guests.

I'm sure you've been in a restaurant where you've noticed that maybe it's just you and a friend and there's a big party and they seem to be getting a lot more attention, because they're going to be earning tips off of the higher bill. I get [the server’s point of view], I understand it. But if there's no tips, everyone is treated with the same level of service.

Our team members help one another out, even though it might not officially be ‘in their section,’ or ‘their table,’ because we just want to make sure the guest has a good time. I've heard bartenders bump certain drinks because they're hoping to get a tip off of the free drink they gave, but that's at a cost to the restaurant.

But here, if we want to bump [a drink] to a guest, it's because we're actually trying to really do something from good intentions, like we want to do something to make their experience a little more enjoyable, or we somehow connected with them and we’re not expecting anything in return.

Q: Have you seen guests scoff at your model?

There is certainly a sticker shock from some prices, yes. We’ve gotten into arguments because it's way too expensive. But we put it on our menus that we're service-included and that all the prices include service. We put it on the receipt. And, you know customers seem to enjoy it. It's been a positive response from guests.

There’s always going to be a few guests here and there that are just mortified that maybe they didn't have a good experience and they complain that the service was included. But customers think that tip is based on your interaction with your one or two servers, but someone still cooks the food, the dishwashers still wash the dishes and that's all a part of you sitting there and having your experience.

Q: How were you able to maintain this during COVID?

Something that COVID has highlighted is that a lot of states have very low tipped minimum wages. Maybe there needed to be a little more stabilized income for your workers. It's a huge undertaking to say, ‘Okay, we've got to convince all restaurants and bars that this will benefit not only their staff, but their long-term business,’ right? And then you have to convince the entire population, that ‘hey, what you've been thinking about food, how much food costs your entire life actually costs more than you think.’

Q: Definitely. It seems like the pandemic made consumers see restaurant workers as essential and professionals as well as opened their eyes to food costs when they started paying for groceries directly from the restaurants themselves.

I think so too. Just seeing [restaurant workers] as professionals and all these guests coming in are also professionals and they have their jobs. If you're a software developer and half of your income was dependent on how much the person you're developing for decides to give you, it would be crazy.

Q: What kind of advice do you have for people who may be interested in this model?

I would say the scariest part probably is actually doing it. The biggest fear is that you're going to alienate your customers. The first question that always comes up with is, ‘Should we move to tipping and reduce our prices?’ and I'm always like, no. You have to stand on principle for something. I say no because in terms of our core values, our top priority is culture. And every decision that we make from a business standpoint revolves around how it's going to affect our company culture.