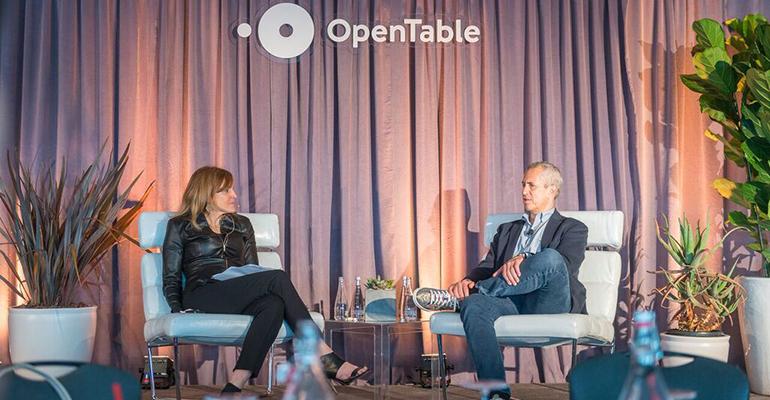 Danny Meyer: People are just as important as food

But he doesn’t mean that as some form of collusion. The New York City-based restaurateur and founder of Union Square Hospitality Group, or USHG, made the comment during a conversation with OpenTable CEO Christa Quarles at a conference hosted by the technology company in Los Angeles on Monday.

Meyer made the point that over the past two decades, the restaurant industry has successfully convinced consumers to pay a bit more for better food, like vegetables that are raised locally or organically, or meat raised humanely without antibiotics.

“We’re so afraid of raising prices to cover costs, and we’re so afraid people will stop eating in our restaurants,” he said. “But I don’t see why we’re afraid to say that people are just as important as plants or animals.”

Meyer is a long-time advocate of the hospitality-included model of menu pricing, which eliminates tips and is now applied at six restaurants within USHG. In time, all of the group’s restaurants will transition to the no-tipping model, he said.

That move has resulted in menu price increases, but Meyer contends it’s actually more honest pricing for the consumer. For too long, he said, consumers have been trained to consider prices without adding the inevitable 18- to 20-percent gratuity that comes at the end of the meal.

“The tipping system has created a false sense of what pricing is,” he said.

Other restaurant operators, meanwhile, have “turned themselves into pretzels” trying to cope with higher labor costs by adding administrative fees or supplemental fees for healthcare as a line on the bill, he said.

“But, when your rent goes up, you wouldn’t put in an extra line for rent,” Meyer said. “It’s a cost increase.”

Meyer was an early investor in OpenTable and a board member before the tech company was acquired by Priceline three years ago.

Daily Provisions doesn’t take reservations, Meyer said. It also doesn’t take cash. And it’s the first restaurant within the group to use Square for payment.

The concept not only strives to serve dishes that are delicious, but they must also be Instagram worthy, he said.

Meanwhile, USHG has signed on to develop the dining options for a seven-acre mixed-use development in Washington, D.C., called Capitol Crossing, scheduled for completion in 2020.

The group will develop at least one concept for the project, and possibly more, but will curate others, Meyer said. The idea of opening a second location of Union Square Cafe there has been discussed, but no decision has been made, he said.

In New York, the group plans to open an as-yet-unnamed restaurant on the 65th floor of the 28 Liberty Street tower, with 360-degree, unobstructed views of the Manhattan skyline and surrounding boroughs, he said.

Typically, restaurants with a fabulous view become high-ticket experiences that attempt to live up to the location, Meyer said.

But he aims to break that rule, instead developing a 90-seat concept that will be as affordable as those at street level, where people could dine multiple times per week. The location will also include a banquet space and bar.

“It will be a down-to-earth restaurant with an up-in-the-sky location,” he said.