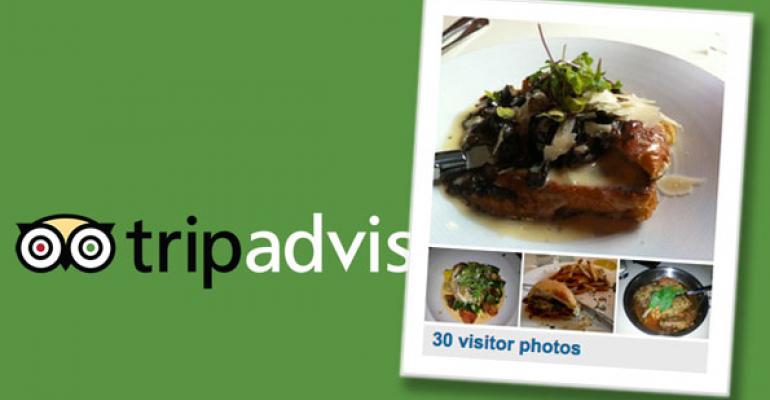 The travel review site is shedding light on how to optimize your online presence &bull; See more Social Media articles

Photos are essential for restaurant businesses and higher management response rates drive up average review ratings, according to new data released by TripAdvisor, a travel ratings, reviews and booking/reservations site.

TripAdvisor, already widely considered the largest travel site based on number of visits, has decided to remedy its inconsistent presence across the restaurant industry. The company recently purchased LaFourchette to compete with OpenTable in the online reservations space. In conjunction with those efforts, TripAdvisor will work closely with partner restaurants and share data about how ratings and reviews can drive covers and check averages.

Key among the most recent findings was that both user- and manager-generated content can make a restaurant’s profile far more compelling to consumers researching on TripAdvisor. Factors that drive the most engagement on restaurant pages, ranked by level of impact on engagement, were:

“Photos are essential in driving higher levels of engagement from prospective customers. Diners are keen to preview the appearance of the restaurant and the food they can expect to find there,” according to the research.

The report says that just by displaying photos on TripAdvisor restaurant pages, owners attract 73 percent more engagement from users as compared to pages that do not have photos. Restaurants with more than 35 pictures see an increase of 107 percent in the level of engagement.

In a Montreal Gazette report, the restaurant's chef and co-owner Benoît Lemieux credited TripAdvisor for an influx of business from a new type of clientele: well-heeled tourists staying in nearby hotels.

"TripAdvisor is the best thing that ever happened to me," Lemieux told the Gazette. He says business was slow until a year ago when a positive review in a Quebec City newspaper generated local traffic. IX pour Bistro then appeared on a Top 10 list on TripAdvisor and the reaction was immediate. Reservations "went through the roof" when the restaurant took over the top spot.

One recent review notes: “Thank you TripAdvisor! Based on the reviews we took a cab ride from our hotel to this restaurant. My husband and I each ordered an appetizer, entree and dessert. Each course was absolutely delicious and creative. Kudos to the chef! Highly recommended.”

“(TripAdvisor) is the best publicity you can get, and it's free," Lemieux told the Gazette. "But it also puts pressure on you to perform at the highest level every night (and) stay on top as long as you can."

IX pour Bistro has 75 user-submitted photos on its TripAdvisor page and 143 reviews. Restaurant hours are clearly stated near the top of the page, a strategy TripAdvisor says has a significant impact on user engagement.

Restaurants that display their opening hours on TripAdvisor see an 11 percent increase in engagement from potential patrons, the study shows.

It also notes the importance of managers responding to guest reviews, not only to ensure they are able to share their side of the story but also in terms of increased engagement levels from visitors. Travelers are 12 percent more engaged on restaurant pages where the owner posts management responses, the study shows.

“Restaurant owners should be encouraging their diners to share their experience by posting reviews and pictures on TripAdvisor,” says Severine Philardeau, v.p. of global partnerships. “Just as importantly, they need to respond to reviews, as the study shows that increasing the frequency of management responses has a measurable impact on average review ratings.”