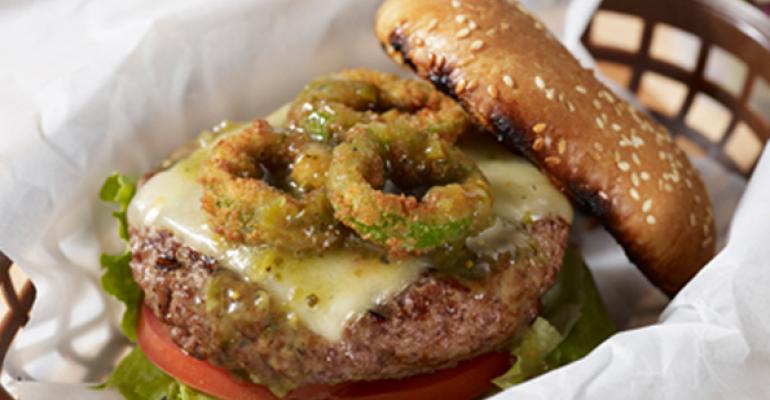 Seeking new and creative ways to deliver excitement and zest to sandwiches and burgers, chefs are introducing unusual fixings and components to pump up flavor and deliver a decidedly more upscale experience to guests.

Restaurant operators nationwide are menuing more adventuresome choices and embracing a wide range of bold ethnic influences that encompass a host of new toppings, dressings, and breads and carriers.

“The sky’s the limit when thinking about world cuisines that can influence the flavor profile of a burger or sandwich,” says Amy Myrdal Miller, president of Farmer’s Daughter Consulting, a culinary and nutrition communication. “You can slather guacamole on a chicken sandwich or infuse ground lamb with Indian spices, top it with a green chutney, and serve it on naan bread. And we’re all seeing sriracha everywhere.”

Robert Okura, vice president of culinary development and corporate executive chef for The Cheesecake Factory Inc., which has 167 units in 39 states, says the emphasis on toppings and carriers is a natural evolution.

“When the burger craze first came onto the scene it was all about who had the most unique blend of ingredients for the burger itself,” he says. “Once that maxed out the focus became the accoutrements that topped the burger, including what bun was used.”

These days, he continues, “all of that still seems to be in play, but as far as interesting and adventuresome things happening with burgers, I would have to say the influence of trendy ethnic flavor profiles and ingredients seem to be the ones capturing food headlines.”

At Umami Burger, a 24-unit chain with units in California, Chicago, Las Vegas and New York, the burgers are chef-driven and feature flavors from around the world.

“Every restaurant we open has a burger unique to that location which allows us to create something unique and inspired by culinary traditions in the area,” says Paul Clayton, the chain’s chief executive. “For example, we just opened in Wicker Park in Chicago and we feature a Calabrese Burger with a Calabrese sausage patty, truffled aioli, house truffle cheese, and Chicago-style giardiniera.”

Because the chain locates in cities, guests tend to be urban dwellers that are accustomed to a plethora of high quality, upscale choices, so creativity is key to attracting and retaining a solid customer base.

“We are always looking for flavor combinations that haven’t been done before on a burger. I think we’ll continue to see more creativity along those lines,” says Clayton, who is quick to point out where that creativity starts. “Diners drive innovation. The art of food is more accessible and popular than ever thanks to shows like Top Chef. Diners expect chefs to do interesting things and create food with integrity and creativity.”

Currently at the Todd English Food Hall, which was inspired by European-style specialty food halls and located at the Plaza in New York, there are eight burger and sandwich choices with plans to add another four. “I find a lot of my inspiration walking through markets and traveling around the world,” says Todd English, chef and culinary director.

“I see more proprietary meat, bun and sauce blends. As far as toppings go, I think people always like to see unexpected toppings.” One of English’s unexpected toppings is created by adding kimchi, a Korean side dish of vegetables, to his Reuben, which he dubs the “Kimchi Reuben.”

“Whenever you can utilize another cultural technique or ingredient in a classically American dish, the resulting flavors are always delicious and interesting,” English says.

Farmer’s Daughter’s Myrdal Miller says restaurateurs looking to perk up burgers and sandwiches need to examine each component separately, and ask themselves several questions. “Can you do a better job with your bread or carrier? Would your burgers taste better if the buns were grilled? Are you ensuring there’s great flavor in the fillings? Can you do a better job of seasoning the ground meat? Are you using the best produce you can source? Are you focusing on technique to develop more flavor? Is there a more flavorful cheese you could use?”

For Okura, when contemplating a new topping it should be all about taste. “Potential toppings for burgers are limitless,” he says. “If you can eat it you can put it on top of a burger. And any one of them will be interesting to somebody, but for how long is the real question.

“To me it’s all about how a topping enhances the flavor of the burger. The topping has to be great, the burger has to be great and together they have to be even better than they are on their own. Otherwise, why even bother?”