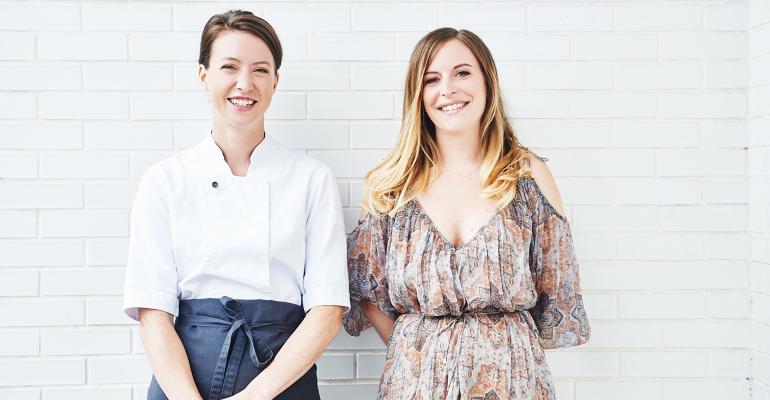 The opposites that attract

At Henrietta Red in Nashville, Tenn., opposites not only attract, they often make the best pairings.

Julia Sullivan and Allie Poindexter’s seasonal seafood restaurant and oyster bar is situated in a landlocked city that’s long been a steakhouse stronghold and has been earning rave reviews since it opened last February. The menu is driven by fresh, simple ingredients, such as shellfish, oysters, crudos and vegetable-forward dishes.

Chef Sullivan, a Nashville native and veteran of Blue Hill at Stone Barns and Per Se, said she’s “in her element” behind the scenes, running the all-female kitchen. Sommelier Poindexter, a Virginia native and former food scholar and writer, thrives in the front of the house talking to guests, even when they express surprise that a petite 29-year-old woman is in charge. They met while working at Haven’s Kitchen in New York City.

With a 65-seat dining room and a 35-seat bar area, Henrietta Red is designed as place to enjoy a sit-down meal or to grab a beer and a bite at the bar before heading to a minor league baseball game.

“I was really inspired by Gramercy Tavern,” Poindexter said. “I love the idea that a restaurant can be more than one thing to all the people in the neighborhood.”

The shareable menu features simple yet flavorful dishes, with many locally sourced ingredients. Housemade Parisian flatbread with anchovy butter has been a popular item. So has Poppy’s Caviar, an appetizer of Tennessee paddle-fish roe served with sour cream, onion, vinaigrette and crackers. Henrietta Red is a celebrated seafood concept in a steakhouse town.

Poindexter’s curated beverage menu is full of dichotomies, too. Instead of the big, bold reds local distributors tried to sell her, she’s created a program that better reflects the food, including natural wines.

“I love champagne, but I also love Miller High Life,” she said.

Both are on the beverage menu, as are Jell-O shots, although revisited as elegant, craft-cocktail versions of the college-party staple.