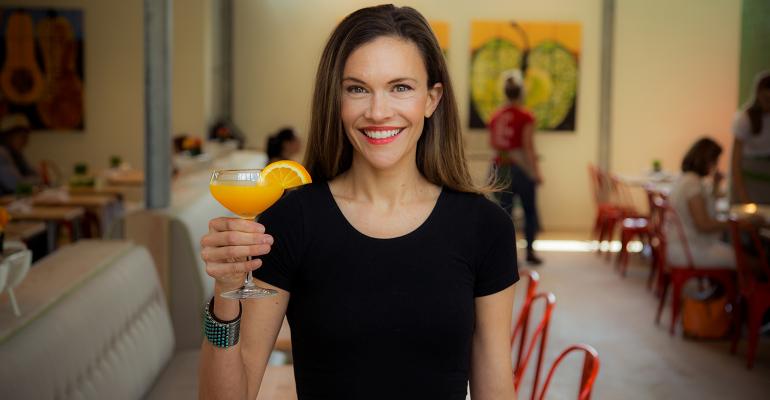 On the Rise: Erin Wade

The believer in human connection

Erin Wade is building a restaurant company based in Santa Fe, N.M., that aims to be an antidote to today’s tech-driven world.

After studying and working in fashion in Milan, Wade returned to the U.S. seeking a dining experience that captured the same “infectiously positive” attitude about food and health that she saw in Italy. Erin Wade’s latest venture will share a patio with Vinaigrette, expanding use of the space.

In 2008, Wade launched Vinaigrette, a full-service salad concept using ingredients from a 10-acre farm she operates in New Mexico.

Now Vinaigrette Holdings includes two more locations, in Albuquerque and Austin, Texas. This year Wade will begin planting at a second farm in Bastrop, Texas, to supply the Austin unit. Vinaigrette locations average $2 million to $3 million a year in 2,000 to 3,000 square feet.

In 2015, next to the original Vinaigrette, Wade opened Modern General, a retail store specializing in beautiful-but-functional home goods. The store also has a café serving breakfast, lunch, snacks and juices.

A second Modern General store is coming in June, just a few blocks from Vinaigrette Albuquerque. The location will include a 900-square-foot wine bar and bistro called Feel Good.

Serving breakfast and snacks, and offering a full bar, Tiny’s will have a walk-up window, and customers can sit on the patio or take food to go.

“Not everything is bigger in Texas. Tiny things done with great love is the thesis of the menu. So it will have tinier items, excellent food, but my belief is everything in moderation,” she said.

That includes technology, which Wade said is a constant distraction “affecting our brains and our happiness and our ability to connect with each other.” At her farm in Texas, she is building cabins and larger spaces as an off-the-grid corporate retreat facility where she plans to offer a “tech detox,” something she did a year ago for a month, with profound results.

She advocates finding a balanced relationship with technology and has traded her smartphone for a flip phone.

“At the end of the day, restaurants are social places where people come to connect,” Wade said. “People still need it.”