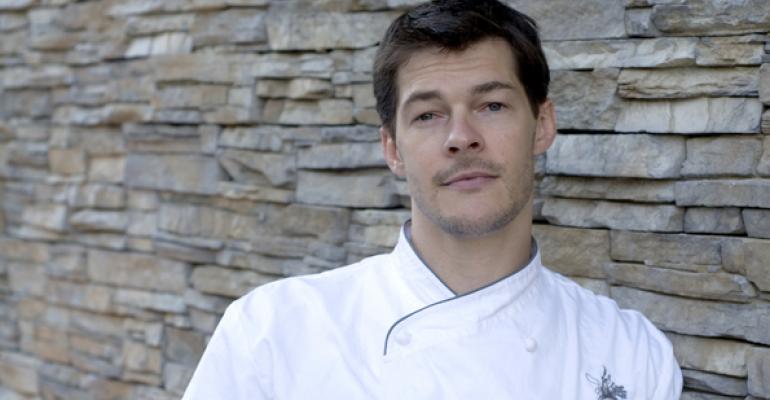 As culinary destinations go, Princeton, NJ, doesn’t come up too often in conversations. But Scott Anderson’s restaurant, Elements, has foodies talking. He dubs his style of cooking as “interpretive American,” and like many of America’s best young chefs, he’s adopted a modern hands-on approach. The chef/owner has close ties to farmers and forgers and, in fact, is an avid forger himself, often collecting fresh bamboo shoots, blood root and countless varieties of mushrooms.

His do-it-yourself kitchen performs all the curing, fermenting, butchery and pasta making. He even goes so far as to create his own miso and soy sauces in house. Anderson’s fanaticism has also turned most of the restaurant’s parking lot into a culinary garden that supplies many of his recipes.

With such fresh, locally sources ingredients at hand, Anderson says he rarely cooks a dish the exact same way twice, even from day to day. “Different products come in our back door every day, and I just cook them,” he says. His modesty belies the thought and effort that go into his food. In addition to an a la carte menu, Elements offers four-course ($69) and six-course ($89) tasting menus. Also available is an expansive chef’s tasting menu for $125.

Some of the offerings on a recent menu included foie gras torchon with pistachio, bergamot and pink peppercorn; house-made spaghetti with braised veal, pasilla, tomatillo, arugula and a 62.5-degree egg; and Japanese Hamachi “tataki” with leeks, cashew, quinoa and green curry.

The New Jersey Star Ledger called Elements “without a doubt the most important restaurant in the state.” Esquire’s John Mariani said, “If Anderson had merely given Princeton its one great eatery, he’d be a hero, but he is in fact in the vanguard of modern global-American cuisine.”

This spring, Anderson will open a second restaurant called Mistral. It will be a bit more casual than Elements and offer small plates, many of them with a Mediterranean accent.