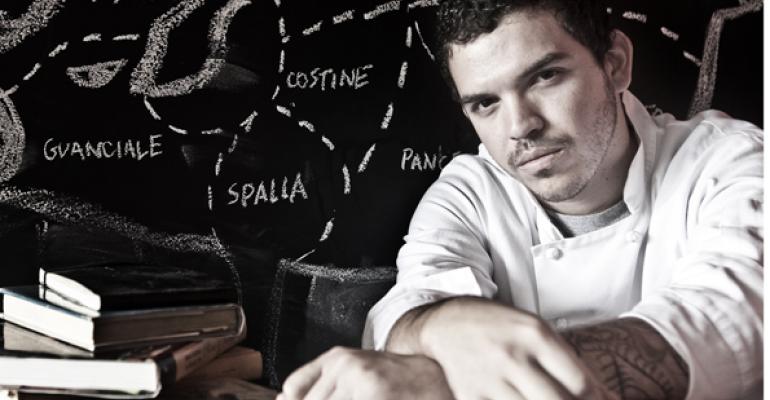 Los Angeles has long been considered oneof America’s great restaurant cities, despite its ups and down over the years. At the moment it’s riding such a culinary high that it just may be at the epicenter of gastronomic cool. There is so much happening in L.A. on just about every food front that it’s difficult to be heard above all the delicious clatter. One of those who have been making a lot of beautiful noise lately is the 28-year-old executive chef of The Tasting Kitchen, Casey Lane.

A native of El Paso, Lane began getting noticed in Portland, OR, where he went to culinary school and honed his technique in several notable restaurants, including Clarklewis. But in 2009, he and members of his culinary team there packed their bags, moved to L.A. outpost, Venice, and opened The Tasting Kitchen. Together, they’re offering a one-page farm-to-table Mediterranean menu that changes daily.

Lane and his crew are creating just about everything they can by themselves, including milling their own grain, making pastas from scratch, butchering their own meats, to curing and pickling ingredients. For their efforts, GQ magazine named The Tasting Kitchen one of the “10 Best New Restaurants in America” and Lane has been nominated for a James Beard Award three years in a row. When you consider that The Tasting Kitchen’s lead bartender, Justin Pike, was named “L.A.’s Best Bartender” last year, you’ve got the makings of a perfect culinary storm.

With this kind of momentum, Lane is pushing ahead with plans to open a gastro-pub called The Parish in downtown L.A. next month. If all goes well, he’ll follow that with a pasta shop called Itri in West Hollywood. Clearly, Casey Lane knows how to be heard above the din.