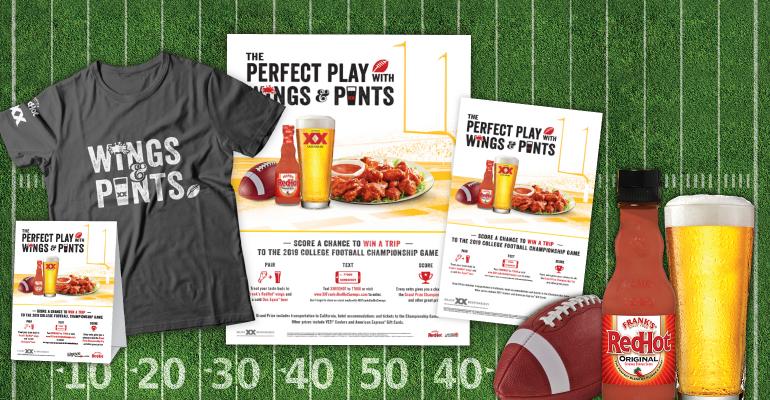 Winging it for a limited time

Operators offer new and returning LTOs to drive sales of chicken wings and other shareable foods.

Fall traditionally has proven to be a good time for restaurateurs to showcase limited-time offers. Thanks in part to the season's food-focused holidays and weeks-long football frenzy, fall LTOs bring to mind shareable foods, bold flavors and family feasts. It's also a time when operators offer selections that reprise last year’s successful selections, introduce new items or offer a combination of both — giving current customers another reason to return, while attracting new guests with innovative menu items.

Buffalo's Cafe launched its “Finally It's Football Season” menu this fall, which includes such full-flavored dishes as:

Football frenzy
Dallas-based Boston’s Restaurant & Sports Bar, which has locations in 16 states, launched a new LTO appetizer lineup for football season. “For us, football and sports in general is about shared experience, so we want to feature food optimal for group dining,” says Adam Garner, vice president of operations.

Also new is the $5 game day menu, which includes Bratwurst and Fries, Cheeseburger and Fries, and beer specials.

For November, turkey and so much more
Restaurants that want to develop a fall LTO need to consider what’s on the mind of their diners. “Football, elections, pumpkin-flavored anything and the holidays are top of mind this time of year,” says Amy Myrdal Miller, founder and president of Farmer’s Daughter Consulting, Inc., in Carmichael, Calif. “On game day, people want food that pairs well with their favorite beer. Clever restaurants will focus on red and blue menu items for election day. And for the holiday, most people are stressed and need a little comfort.”

November is also Smoky Bourbon Wings month — at least at Dan and John's Wings, with locations in New York. The flavor of the month changes among a rotation of Smoky Bourbon, Garlic Parmesan, Sweet Chili, Lemon Pepper, Teriyaki, and Honey Mustard. Each flavor is the special during two different months each year.

“In a very complex and technological world there get to be too many choices, and there is too much information to think about and process,” says co-founder Dan Borowski. “People want it simply laid out for them. In the fast-casual culinary world, the fewer choices you give people, the better.”

Be strategic
There are several things to consider when planning a football or holiday-themed promotion. “Successful LTOs are a multi-faceted consideration,” says Blayne Howser, director, client development for the restaurant consultancy Sandelman and Associates. Operators have to analyze how successful past LTOs performed using metrics such as trial including satisfaction, incremental visits, spend, and gender/age/income skew. They also have to look at whether their supply chains can send enough product, how the new offer will affect operations, and whether there is a secondary use for any unique ingredients and other details.

“LTOs should excite the consumer,” Howser says. “Success is dependent on successfully capturing history and executing the LTO process in its entirety.”

Another way to menu an effective LTO program is to partner with a supplier like Frank’s RedHot® Sauce, which offers Frank's RedHot® King of Wings promotions. Operators can sign up to receive merchandise such as table tents, posters, T-shirts and hats. There are also wing recipes to inspire operators to create new menu items, and wing and beer pairings that can help bump up the check average.

Frank's RedHot® Sauce also offers the Perfect Play with Wings & Pints promotion, in which consumers can take photos of their wing orders and post them on social media for the chance to win. The Grand Prize is a trip to the College Football Championship, while secondary prizes include Yeti coolers and $25 American Express gift cards.

Whether it’s a football-based special or a festive spread for holiday gatherings, fall LTOs are a great way to attract new consumers and to keep current customers enthusiastic about the menu.